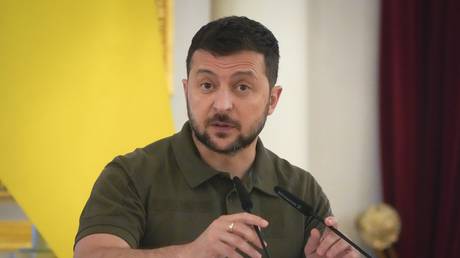 The latest edition of Vogue magazine featuring a glossy photoshoot with Ukrainian President Vladimir Zelensky with his wife Alena elicited a mixed reaction online amid the military conflict with Russia.

Tuesday’s article, which primarily focused on the 44-year-old first lady, features a series of shots of the couple taken by famed photographer Annie Leibovitz. In one photo, the two are seen hugging each other while seated at a table. In another, the first lady sits on a grand staircase as the president stands guard behind her. Another shows Alena standing beside the remains of an Antonov AN-225 Mriya surrounded by armed soldiers.

Reactions to the article have been mixed. Some have called the photoshoot “beautiful” and “powerful,” and defended the couple’s decision to pose for Vogue as shining a light on the conflict in Ukraine, keeping it in the forefront of international attention.

Verizon executive Tami Erwin wrote on Twitter that the article was “an outstanding profile” and commended the first lady for doing an incredible job representing her people.

Others, however, used the glossy photos as evidence that the West should not have sent billions in military aid to Ukraine, saying the photo session was in poor taste.

“While we send Ukraine $69 billion in aid Zelensky is doing photoshoots for Vogue Magazine,” Republican Congresswoman Lauren Boebert tweeted. “These people think we are nothing but a bunch of suckers.”

Congresswoman Mayra Flores (R-Texas) juxtaposed US President Joe Biden’s statements that Ukraine needs more money from America with the reality that the Zelensky family instead “graces us with a photo shoot to be on the cover of Vogue magazine.”

Rebel News Australia bureau chief Avi Yemini said the photoshoot reminded him of when he first saw Zelensky supposedly on the frontline in the early days of the military conflict between Russia and Ukraine.

“I respected Zelensky at the beginning of the war when we were flooded with photos of the Ukrainian President on the frontline in tactical gear. Turned out the photos were faked. An act like the man himself. Now posing for Vogue. All to grift billions from western taxpayers,” Yemini wrote.

Zelensky also recently appeared on the cover of Wired magazine for their September/October issue, albeit in a less glamorous shoot. The Ukrainian leader told the magazine that it was important to be a good communicator in the world of social media.

“The internet is a reality. It is not another world, but rather a modern reality. So if you want people to perceive you as you are, you must use what people use,” he stated.