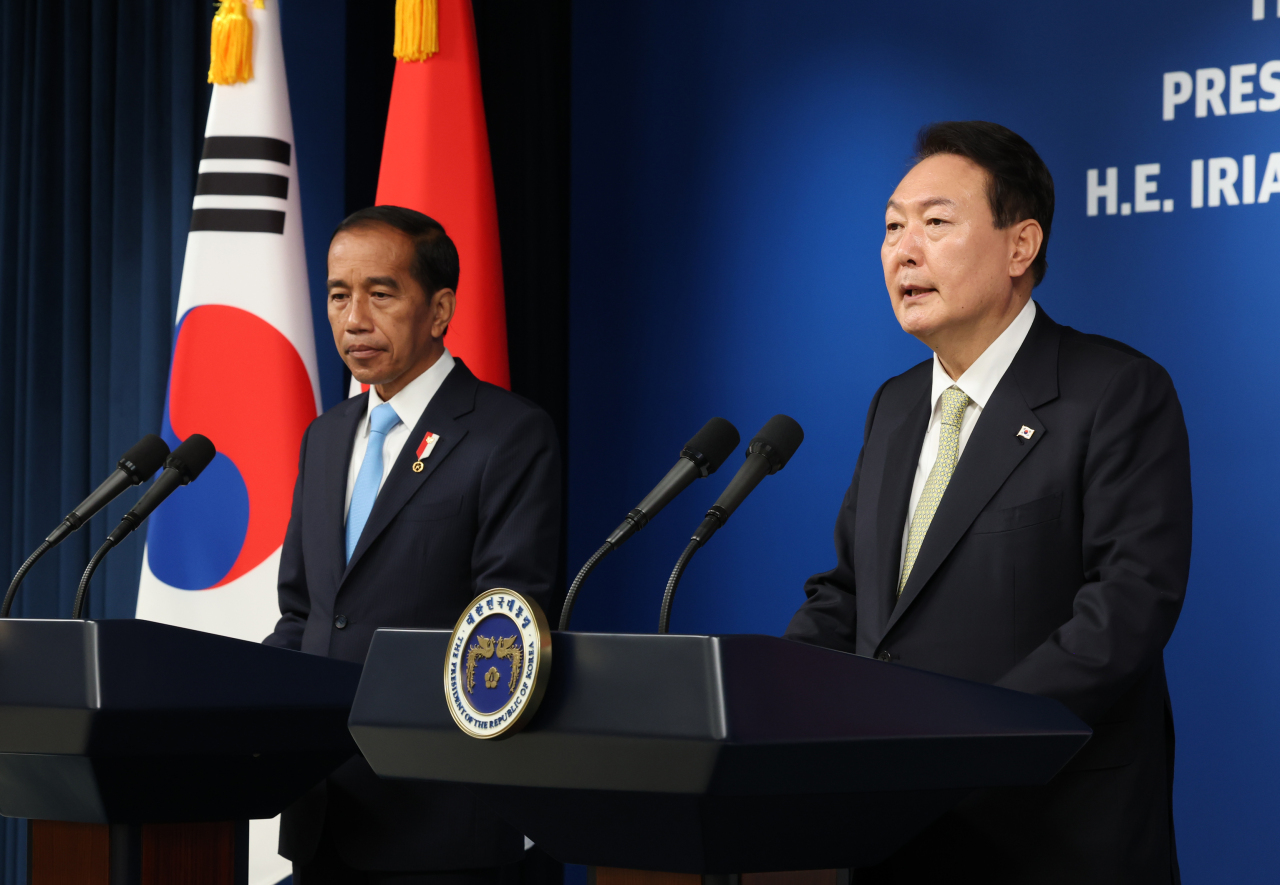 The leaders of South Korea and Indonesia have agreed to stabilize supply chains of materials crucial for manufacturing of technology, and strengthen ties to support smooth delivery of Indonesia’s capital city relocation project. President Yoon Suk-yeol also conveyed Korea’s strong willingness to strengthen ties with ASEAN nations and shared its views on the region’s strategic importance.

The agreement was announced after a summit held Thursday between Yoon and Indonesian President Joko Widodo.

The Indonesian leader is in Seoul for a two-day trip, his first visit since attending the ASEAN–Republic of Korea Commemorative Summit in 2019.

“President Widodo and I have decided to build strategic alliances in high-tech industries such as electric vehicles and batteries by strengthening economic security cooperation between the two countries, including stabilizing key mineral supply chains,” Yoon said, reading the statement.

The president noted that Indonesia is rich in core minerals such as nickel, which are essential materials for Korea‘s high-tech industries.

The two sides also agreed to cooperate more closely on the Indonesian capital relocation project regarding infrastructure and road construction.

In January, Indonesia’s parliament passed a bill to relocate the country‘s capital city from Jakarta on the island of Java to the East Kalimantan province of Borneo. The new capital will be built as a smart city.

“Our experience building Sejong City will be a good reference for Indonesia,” Yoon said. “Through today’s summit, the two countries revised the MOU for cooperation in the relocation of the capital.”

President Widodo said, “Korea is an important partner of Indonesia in East Asia.”

“Under Yoon’s leadership, two nations’ partnership will be strengthened in the future especially in the economic sector,” he said.

He said he hoped the two nations would continue to “keep the market open” and “increase bilateral trade,” especially in the sectors of “petrochemicals, electric vehicle batteries and renewable energy.”

He thanked Korea’s support for Indonesia’s G20 chairmanship, and said he looked forward to Yoon’s participation in the G20 summit.

“I conveyed to President Widodo Korea’s strong willingness to strengthen ties with ASEAN nations and shared its views on the region’s strategic importance,” he said. “Based on our strong support for ASEAN centrality, we will harmonize our Indo-Pacific strategy with ASEAN’s perspective.”

To this end, the two countries agreed to continue close communication in the future.

“Defense cooperation is another key pillar of bilateral relations,” Yoon said. But the statement did not specify the issue of the payment of contributions to Indonesia, a country that jointly developed a Korean fighter jet (KF-21 Boramae).

Yoon said, “Together, we celebrated the success of the first test flight of the KF-21, a next-generation fighter developed by both countries.”

The two countries reaffirmed their commitment to continue cooperation so that the joint development project for next-generation fighter jets could proceed smoothly until completion.