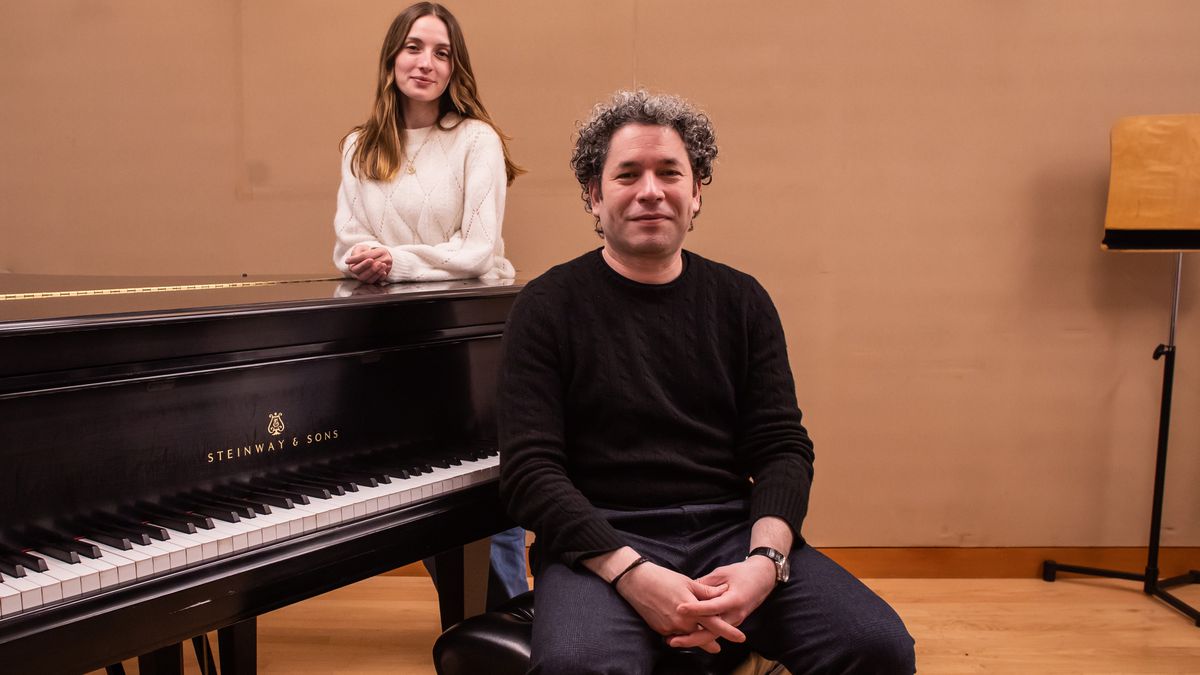 Standing before the Los Angeles Philharmonic, the 41 year-old Venezuelan orchestra conductor is pushing through the final details of the rehearsals of Fidelio, the only opera Beethoven composed. It premiered on Thursday at the Walt Disney Concert Hall with actors and a choir of deaf people.

The production was supposed to premiere in Barcelona two years ago as part of the celebrations marking 250 years since Beethoven’s birth, but the pandemic forced a change of plans.

Dressed in black and wearing Adidas sneakers, Dudamel, who is head of the Paris Opera, asked for a more suffocating sound from the instrumentalists before him – something more like the atmosphere that political prisoner Florestán, one of the protagonists, experienced during his confinement.

During a break in the rehearsal, Dudamel tells EL PAÍS he had invited the orchestra to consider “the stench of the tight place he [Florestán] was in, the feeling of oppression…in addition to the human pain, you can feel the physical space of where he is just by listening to the music,” he says.

Dudamel describes Fidelio as one of the most important pieces of music in history. It took Beethoven years – from the mid-1790s until the premiere in Vienna in November 1805 – to convert Fidelio from its French original, Leonor, or conjugal love, by Jean-Nicolas Bouilly.

Beethoven’s hearing problems began to emerge in 1798, when he was 28 years old. In a letter to his brother, the musical genius shared his despair about the condition that would become total deafness: “What a humiliation for me when someone hears a flute in the distance and I hear nothing; or someone hears a shepherd singing and again I hear nothing. My sorrow is doubly painful because I am bound to be misunderstood.”

Since he denounced the abuses of chavismo in 2017, Dudamel has been maligned by the Nicolás Maduro regime in Venezuela. His team asks the media to avoid political themes in interviews, but it is somewhat impossible not to note that, from Beethoven’s vast catalog, the conductor chose the story of Florestan, a political prisoner who is rescued by his wife, Leonora, who pretends to be a man (called Fidelio).

Dudamel does not deny that the theme of repression is relevant to his own experience but, he says, “it goes beyond that. We are prisoners of many things.”

Of the opera he says that, “more than a hymn to freedom in the political sense, it is about the liberation of the self.”

Beethoven also wanted to express the prison he felt himself to be in as he became deaf, explains Dudamel.

“What a terrifying silence!” exclaims Florestan at the beginning of the second act.

Deafness created numerous obstacles for Beethoven, and compared to instrumental compositions, he had always found vocal works to be more challenging. For Florestan’s aria, In des Lebens Frühlingstagen, the German legend rehearsed 18 different beginnings and another 10 for the chorale Wer ein holdes Weib. Traces of this are evident in the written music. “There is the famous tritone, the notes played by the timpani, which is which is the E flat and the A natural, which were considered to signal the presence of the devil in music. Before Beethoven, they were avoided, but he made use of them as a theatrical element.”

The idea of staging Fidelio with deaf actors who could reflect Beethoven’s inner torment at losing his hearing was first developed by the Venezuelan conductor in 2018 together with his wife, Spanish actress María Valverde.

“That silence in which he was immersed gave him the ability to write music that is still avant-garde today,” says Dudamel.

Soon the project involved Los Angeles’ Deaf West Theatre company, renowned for its role in musicals, films and series since 1991. The Manos Blancas Choir, made up of 12 deaf artists from the city of Barquisimet (Venezuela, also the city where Dudamel was born), also joined the production.

On stage, the audience witnesses a world with a mix of hearing and deaf people.

Deaf actors Amelia Hensley, Josh Castille, Russell Harvard, Indie Robinson and Gregor Lopes translate the script in American Sign Language. The singers appear one step behind each actor: soprano Christiane Libor, tenor Ian Koziara, baritone Ryan Speedo Green, soprano Gabriella Reyes and tenor Jose Simerilla Romero. So much is happening on stage that the audience can’t help but feel left out – as the deaf population often do in a world meant for the hearing.

“It’s a way of educating us to in being open to worlds we’re not used to,” says Maria Valverde, who is directing a documentary about the Manos Blancas Choir and is president of the Dudamel Foundation.

One of these educators is 31 year old Jesús López Timaure who studies Systems Analysis at the Lisandro Alvarado University in Venezuela. He has been with Manos Blancas, which is part of his country’s public music education program, since 1999. In the first trips he made, López noticed there were no similar choirs that translate music into sign language in other countries. However, over time the model has been replicated in other countries. Arriving in Los Angeles at the end of March, the deaf choir has discovered the theatrical performance aspect of Hollywood.

“It’s the first time we’ve done opera. We’ve had to work harder. Not only with signing, but also to be more expressive in our acting. We have learned a lot about theater. Previously I didn’t know anything,” explains López through an interpreter.

By a quirk of fate Fidelio, directed by Alberto Arvelo and Spain’s Joaquín Solano, is showing just weeks after CODA (Children of a Deaf Adult), a cinematic portrait of a deaf fishing family, won the Oscar for Best Picture and earned actor Troy Kotsur the first acting award for a non-hearing person in 36 years.

Indeed, with production company Pathe, the Deaf West Theater company is now adapting CODA into a musical. “Energies and desires always converge, it’s fascinating,” Dudamel says. “When this all started, we didn’t even know the movie was happening.”