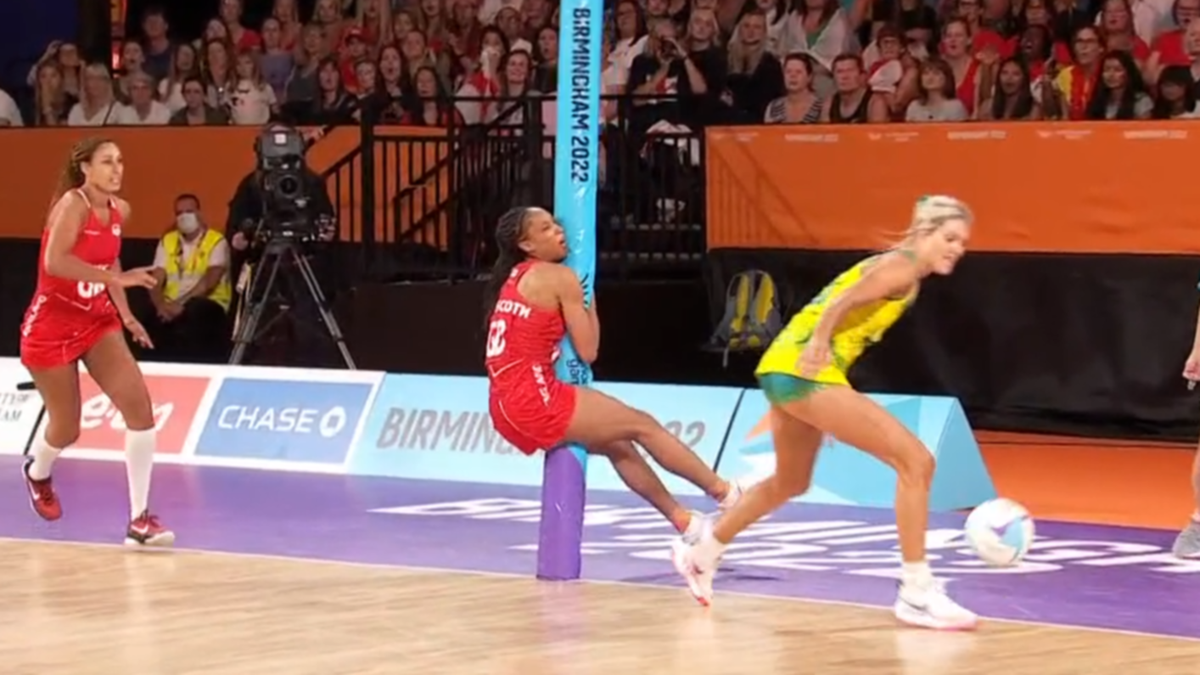 It’s been a no-holds-barred start to Australia’s netball semi-final against England at the Commonwealth Games in Birmingham.

So physical has the crucial clash been that a player has crashed into and broken a post.

See the massive collision in the video player above

England goal defence Layla Guscoth went for an intercept, with the momentum of the effort sending her crashing into the post.

She got up smiling and was unharmed and able to continue the game.

Not so much for the post – it needed to be replaced.

After a short pause in the game, the bent post was pulled out and a new one slotted into its position.

The Diamonds went on to beat England. You can see more of the match details here.

Wounded Diamonds get their netball payback

Australia’s path to netball gold in Birmingham was always likely have to go through England, and so it remains despite the Diamonds shock loss to Jamaica.

Instead of facing the English in what everyone assumed would be the gold medal game – in a rematch of the epic 2018 battle for gold on the Gold Coast – a wounded Australia took on the host nation in the semi-finals.

That comes after the Aussies could not finish off the job when they took a six-goal lead into the final period against Jamaica in their final Pool A game, the Sunshine Girls jumping on the back of superstar shooter Jhaniele Fowler to pull off one of the biggest upsets of the Games.

It handed Jamaica top spot in the pool, and consigned Australia to second and a clash with Pool B winners England.

“This is the part where this group is really resilient, they’re really focused on how to improve,” Diamonds coach Stacey Marinkovich said.

“They’ll walk away from this (loss to Jamaica) understanding that we can play good netball and be successful, but you’ve got to do that for four quarters.

“To let it slip the way we did, that’s the part they’ll learn from most.”

And it is a pain Marinkovich used to drive her team to put together a four-quarter performance against England.

Then there is also that little thing called revenge, after England’s epic 52-51 win in the Gold Coast gold medal match – when Jo Harten scored after the final siren.

It was the first time neither Australia or New Zealand had claimed Commonwealth Games netball gold.

Four Diamonds players from that game are part of the squad in Birmingham – Courtney Bruce, Jo Weston, Steph Wood and skipper Liz Watson.

The English believe organisers have done them few favours with the scheduling, with Australia’s final pool game against Jamaica held some 12 hours before England’s final preliminary match against New Zealand on Thursday night.

“They’ve played early in the morning so have pretty much an extra day’s rest on us,” said England goal-keeper Geva Mentor, one of five English players returning from the Gold Coast Games.

“They’ll go away and do their homework – their assistant coach is my coach at home, so I know how hard they’ll review the game (against Jamaica), and watch our game (against New Zealand).

“I expect them to be licking their wounds but move straight on.”