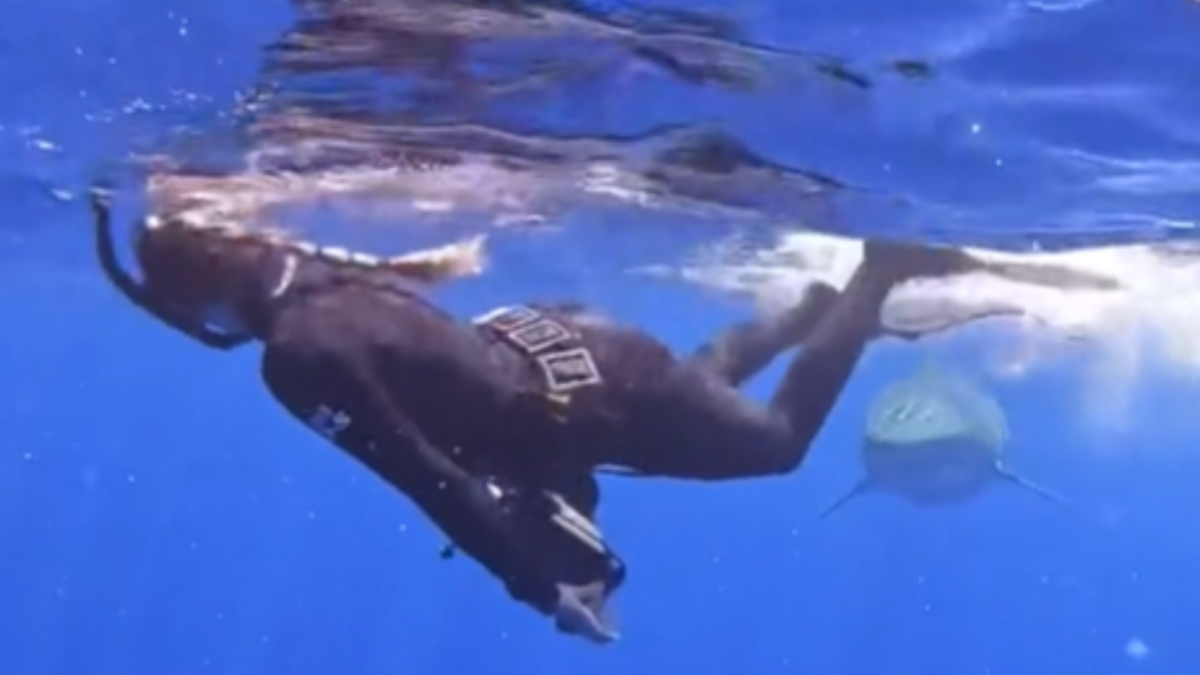 A diver has stopped an oncoming tiger shark in its tracks with a simple trick to prevent the predator from attacking.

Footage captures her coming face-to-face with the shark before she calmly redirects it with several seemingly simple gestures.

WATCH THE VIDEO ABOVE: Woman escapes shark attack by pushing it away

Fellow diver Kayleigh Grant, who narrated the video of her friend and posted it on social media, explained exactly why you shouldn’t “splash and swim away from sharks”.

“Turning your back, splashing, and swimming away from a shark will trigger their natural response as a predator to chase and follow,” Grant said.

“That imitates what prey does.

“If you run into a shark you want to face them and stay calm.”

Remaining calm in such a situation is easier said than done, but Grant says that when faced with “top predators like sharks” it is important to act like a predator yourself.

Maintaining eye contact with sharks while diving is one of the most important ways to do that, she says.

Grant is a trained professional and does not advise swimming with sharks unless you are supervised by a professional.

“With tiger sharks you can place your hand on top of their head and gently press down, and that will redirect them away from you,” Grant said.

She advises divers to make sure their hand is on top of the shark’s mouth, and “usually they will avoid that pressure”.

If a shark’s behaviour ever seems “too assertive”, Grant advises divers to “back out of their area” by swimming backwards without splashing and while maintaining eye contact, with your flippers between you and the shark, and your hands close to your body.

For many sharks, Grant says you can also hold any other large object between you and the shark to deter it, such as a GoPro stick or a large camera: “Sticking an object other than a body part towards a shark is definitely the best idea.”

Tiger sharks are known to be one of the most aggressive species of shark, and Grant says that because they are so large, powerful and strong, they can swim straight through flippers and large objects.

That’s why Grant says the best thing to do for this species is to gently push the shark away with a hand on top of their head.

The work Grant does aims to break down the stereotypes that sharks are inherently aggressive, and says that with her training she has experienced tiger sharks to be “generally mild in temperament”.