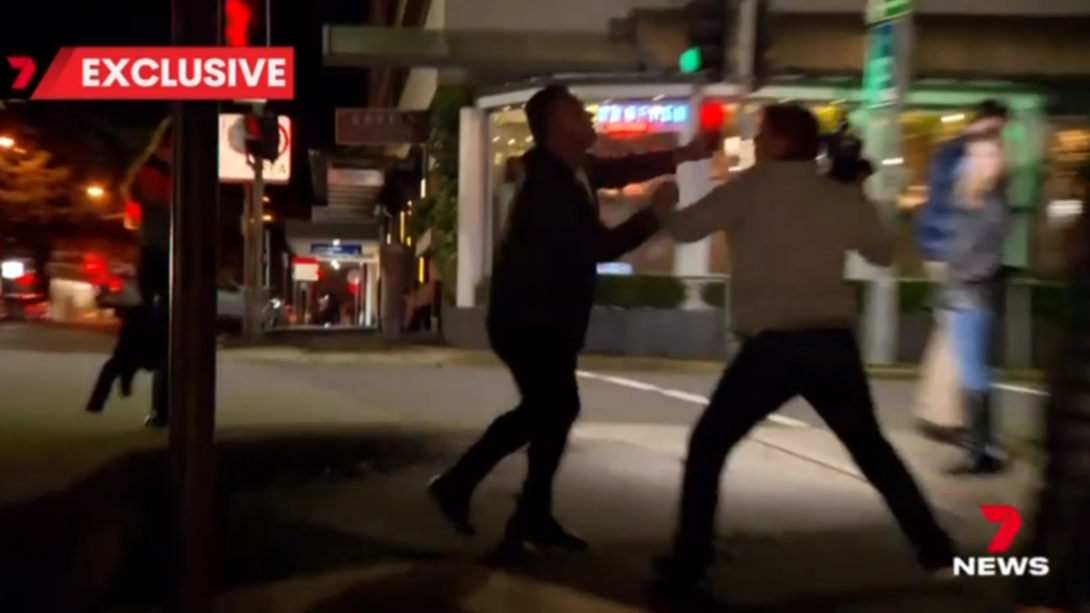 Exclusive 7NEWS footage of the scuffle between former deputy premier John Barilaro and a cameraman has been collected by police as detectives investigate the incident.

Three detectives visited the Channel Seven Sydney office on Tuesday to subpoena the video of the scuffle between a freelance cameraman, Barilaro and the woman now identified as his new partner, Jennifer Lugsdin.

Watch the video above for new details on the incident

His former staffer and now Treasury Wines executive Jeff McCormack has also been identified in the vision.

Those involved are being sought to help police with inquiries.

Video footage shows the former Nationals leader briefly clashing with the cameraman on a Manly street on Saturday.

The pair is seen struggling and grab and push one another while the cameraman tries to film Barilaro, who then walks away.

Barilaro defended his actions, saying his privacy was being invaded and he felt harassed.

“On Saturday night, I went out with friends for a few drinks, for a pizza, to come out in the dark to have a camera shoved in your face, a microphone in your face,” he told Sydney radio 2GB.

“At that point, I asked him to walk away, I’ve got nothing to say but the constant harassment … I’m a private citizen, I left politics last year.

“The way I was confronted in the dark outside of a bar … If that was you, how would you have responded?

“All I did was push a camera out of my way.”

“I don’t think anyone who goes to work should be subject to any of that type of treatment.”

It is the latest controversy to hit the former leader, who is the subject of a parliamentary inquiry into how he was appointed to a plum government trade job in New York.

The scandal over Barilaro’s appointment to the $500,000-a-year trade commissioner role deepened on Tuesday, as the government released sensitive internal documents.

“After a full recrutiment process, the successful candidate is Ms Jenny West,” it said.

It even notes “a meeting between the treasurer and Ms West”

But the premier told parliament last month, “the first recruitment process did not identify a suitable candidate”.

Trade Minister Stuart Ayres was sent a similar briefing note that he signed, but denies any wrongdoing when he also told parliament: “At the end of that first round of recruitment there was no suitable candidate identified.”

The Opposition claims there are 198 documents in total, 181 of them have been marked privileged or classified.

They say they’ll continue their plans to force the recall of Parliament on Friday to get them released.