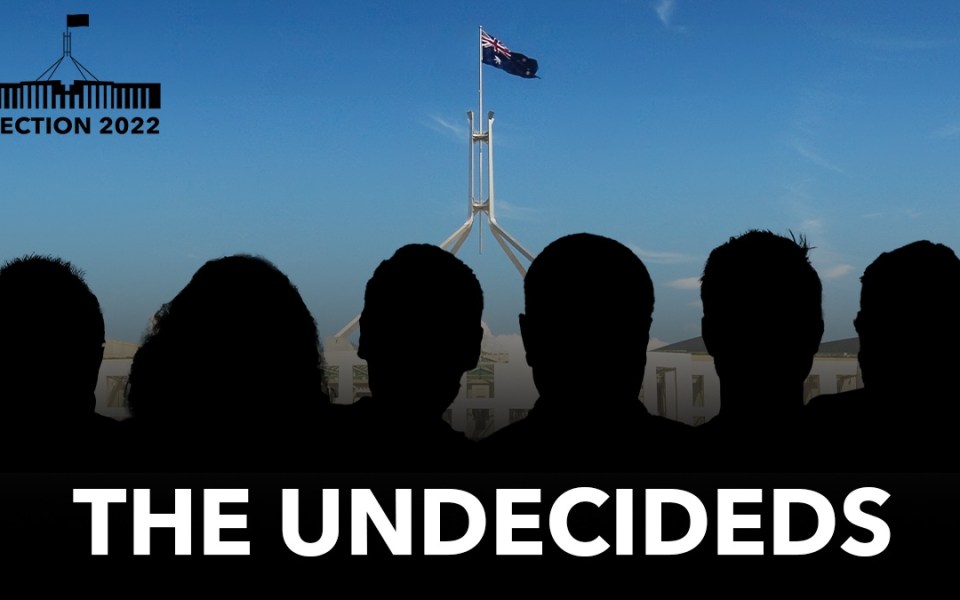 At the end of the night, 35 per cent of the audience was swayed toward Mr Morrison, 40 per cent favoured Mr Albanese and 25 per cent still felt undecided.

It is these unsure voters who could determine the election.

Each week until election day, we will speak to the same undecided Australians from around the country, following their voting journey to Saturday, May 21.

Here is their take on the election debate.

“There wasn’t much to it, was there? I think the topics that were covered – what they chose to cover – there wasn’t anything really that I got out of it that was promising. I think it was the same old strategy and we all know strategy is a marketing term.

“There was nothing concrete there that I could really pin my hopes on.

“I think Morrison was right up to par. He was the perfect salesman doing what he did best at dissembling and avoiding the questions and deflecting what he didn’t want to hear.

“Albanese, I thought, struggled a bit. He was trying to feel his way, but he has a week off now to consider what is happening.

“I didn’t find either of them impressive, really. Poor old Albo doesn’t have the presence of a Gough Whitlam, or the biting sarcasm of a Paul Keating, or the charisma of a [Bob] Hawke. He’s coming across as a little colourless at this stage to me.”

“I can’t really give too much of a comment because I didn’t really see much of it.

“I tell you what, I’ve switched off a little bit with it because it’s just – I don’t know, there doesn’t seem to be much policy that’s making me interested. Obviously with Albanese’s mess-up last week, it just seems to be attacking each other on the economy. And I don’t really believe it’s the government that has been creating more jobs for people, I think it’s just the economics of it, really, especially after COVID. So I’m not really buying their argument that it’s all because of them that the unemployment rate is so low.

“I think I’m still really not convinced with Labor either, which is a real shame.”

“[It] actually broke my heart to see and hear Scott Morrison and Anthony Albanese in one scene behave like school children. I understand it’s a debate but to me it’s about integrity.

“Who is this person that wants my vote? Will he keep my family, my country safe from harm? Will my grandchildren, great-grandchildren live a peaceful existence?

“Maybe I am unrealistic, but this time ’round I need a genuine person.

“Anthony Albanese was the better person but needs to work on his assertiveness.”

“Firstly, accessibility. We sat down and thought we’d watch the debate tonight. Then we turned on the television and realised, ‘Hang on, we can’t find it’. I downloaded the Sky News app and it didn’t seem to be on there, so I found a news article that had a link to the live stream on my phone and I was able to then mirror it onto the TV off the phone. That was the only way we could watch it.

“I thought most people won’t have been able to see it because it was just too difficult to get to. I was almost going to give up.

“The debate was pretty light on policy from either of them, so no real substance to what they intend to do. I think Anthony Albanese did well, came across well, conducted himself well. It looks like he’s come into his stride a bit. Scott Morrison is a lot more accomplished and experienced at doing these sorts of things, and it showed. He did seem to be a lot more polished at times and he came across with a bit more confidence.

“But the debate didn’t really sway me, it didn’t make me think, ‘Oh, well now I’m going to vote for him or him’. I just think Anthony Albanese conducted himself well and he did a good job in that context. But again, not to the point of ‘I have made up my mind and I am voting for him’. It didn’t do that for me.”

“It wasn’t anywhere near as comprehensive as I thought it might have got. But basically, they only looked at three things, turning the boats, the national disability system and aged care.

“I don’t know how I feel now, I’m a little bit more undecided again because ScoMo came across as a nice ScoMo. He wasn’t aggressive and he wasn’t sarcastic, he was nice. Now that’s not ScoMo, that’s just not him. He’s an aggressive person, so that surprised me the way he was. And Albanese wasn’t too bad at all. I remember his first speech in reply to ScoMo calling the election and he was so good. He was so good.

“I was leaning really quite heavily towards Labor, now I’m sort of fence-sitting again.”