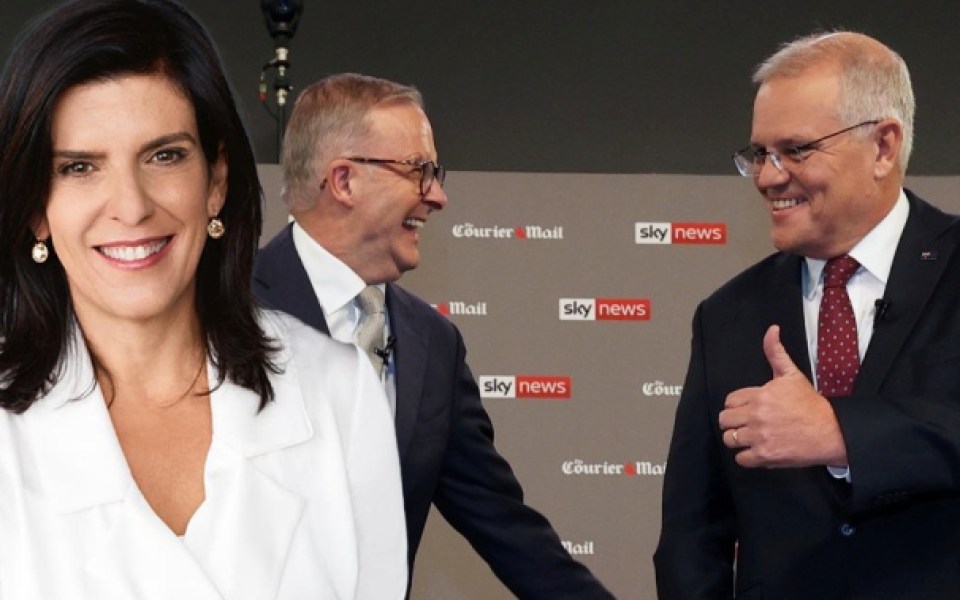 “I don’t know who to vote for. They’re both as bad as each other.”

It’s unsurprising that people around the country are saying this, coupled with their deliberately ‘tuning out’, ‘not listening to the news’ or suspending social media accounts. Because never in Australian history have we seen such a low level of faith in integrity in the major parties.

“It’s mudslinging season,” Morrison government MP Katie Allen said in a chirpy tone during an interview on The Project. Like this is normal. Business as usual.

What Allen didn’t want to talk about was that usually the mudslinging comes from the opposition. But not this time. Not for the Liberal Party. A lot of it is coming from within their own party, and they have additional opponents.

A ‘gap in the market’ of the Liberal Party’s own making has been created – a number of outstanding candidates are now running as independents in formerly safe seats.

Led by Morrison, the Liberals’ mudslinging is not just against their own, but towards women who could have easily been their own.

In this election campaign, the Liberal Party is engaging in a triple dose of mudslinging – within their own party, against the independents, and in keeping with tradition, against the opposition. With a smattering of scare campaigns thrown in.

I’ve worked with one former, one current and one aspiring prime minister.

The former being Malcolm Turnbull after I was elected in 2016. I decided not to re-contest the next election days after the leadership coup and Turnbull left the Parliament.

The current being Scott Morrison, including three months under his leadership as PM, after which I quit the Liberal Party and served as an independent.

And my tenure as an independent MP brings me to the aspiring prime minister Anthony Albanese.

During this time I worked more closely with Albanese and MPs across the parties and on the cross bench than I otherwise would have done.

I got to know all three leaders.

So, I’m well qualified to address a few mistruths about politicians.

One is “politicians all lie”. That’s not true.

Another is politicians all have no integrity. Not true. There are people in politics who are good people. People who genuinely care for their communities and others, where ‘others’ are beyond their immediate families and loved ones.

People who, like all of us, stuff up sometimes, but who above all else, are people who you can trust and where there is mutual respect.

Trust, integrity, ethics, governance and accountability. These principles underpinned my advice and counsel in decades of a corporate career working in blue-chip multinational companies. Not because it was ‘corporate speak’ or ‘nice to do’ but because, as I’d often hear myself saying, it was the right thing to do.

Leaders taking accountability for ‘the right thing to do’. This embedded trust, and respect in our employees and our customers. It created a healthy, safe and collegiate workplace culture. And it delivered success.

Additionally, while working for these international companies in my corporate governance roles, I always took for granted, albeit with a little pocket of pride in my country, Australia’s stellar global ranking in Transparency International’s Corruption Perception Index.

We were up there, ranked highly with the least corrupt countries in the world.

In this campaign period, our focus is on the numbers, the rates and the polls, but what we must focus on is that Australia has depressingly recorded its worst ever score since the index was first established in 2012 – largely due to the failure to establish a federal anti-corruption integrity commission.

Jen and the girls

As we enter week three of this six-week “season”, we see Morrison thrive in the environment where performative politics takes precedence over accountability.

His use of shields – ‘Jen and the girls’, female MPs with whom he’s struck a patriarchal bargain, community members who only see his public life.

And his ‘swords’ – the mudslinging, outright lies and distraction or scare campaigns. All being a substitute for any semblance of accountability of the truth or honesty. All to distract from his dysfunctional team, the ducking and weaving, blame shifting, cover-ups and his government’s major reputational problem with women, his incompetent job performance regarding the Black Summer bushfires, floods, the COVID vaccine ‘stroll out’, or our woeful standing on the global stage with regard to climate action.

The blanket of hope over all of this is integrity. It cannot be pierced, confected or created. It’s either there or it isn’t.

Morrison’s broken promise on creating an integrity commission, his misleading rationale for why it didn’t happen and his reason for ditching a meaningful and effective commission is gobsmacking.

Once, when I was a government MP under Malcolm Turnbull’s leadership, I was watching him in a TV interview. At the end, the host held a ‘fun pop quiz’ requiring ‘one-word answers only’.

What’s the most important quality in a Prime Minister?: Without hesitation came the then-prime minister’s answer. Integrity. I believe him.

The aspiring prime minister Anthony Albanese has said of himself, “what you see is what you get”, and I will treat you with ‘respect and integrity’. And he also says he will implement an Integrity Commission. I believe him.

Aside from MPs on the cross bench and in other parties, I have lost count of the number of current and former Liberals MPs and members – many of whom I know personally – who, in addition to the ones who have ‘gone public’, say that Morrison can’t be trusted, is only interested in power not people, and has no integrity. I believe them.