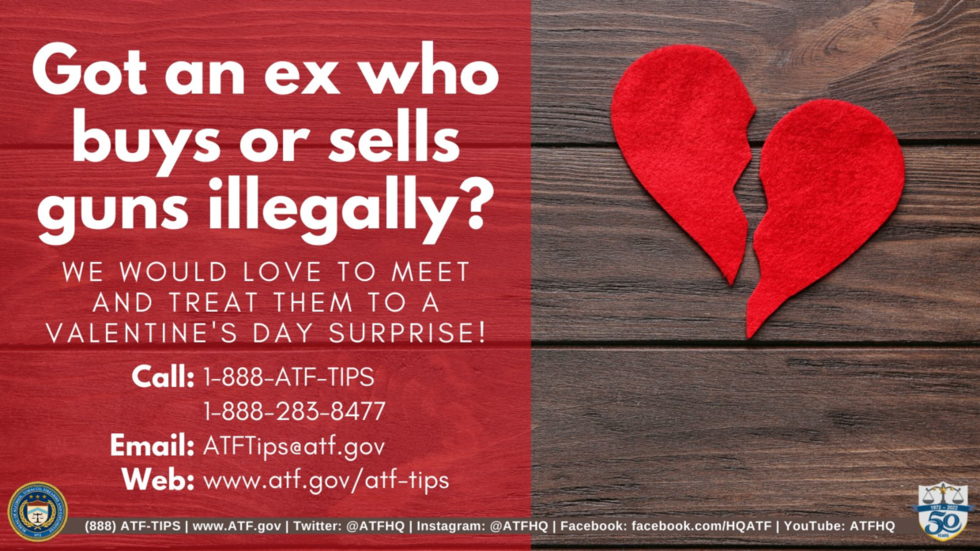 A federal law enforcement agency has suggested a novel way for Americans to get back at their ex-lovers on Valentine’s Day: turn them in for illegal gun activity.

The US Bureau of Alcohol, Tobacco, Firearms and Explosives (ATF) tweeted out its holiday pitch on Monday, urging people to take revenge against their exes. “Let us know, and we will make sure it’s a Valentine’s Day to remember,” the agency said.

The ATF promoted the idea as a way to make the special day for lovers fun, even for those who broke up with someone. It also made up a poster soliciting tips from people with former mates who buy or sell guns illegally, saying, “We would love to meet and treat them to a Valentine’s Day surprise.”

Valentine’s Day can still be fun even if you broke up. Do you have information about a former (or current) partner involved in illegal gun activity? Let us know, and we will make sure it’s a Valentine’s Day to remember! Call 1-888-ATF-TIPS or email ATFTips@atf.gov. pic.twitter.com/OdDIPdIzkr

However, the appeal was met with pushback on Twitter, where it was lampooned by critics. Much of the ridicule pointed to hypocrisy, such as the fact that President Joe Biden’s son, Hunter Biden, still hasn’t been charged for allegedly concealing his history of drug abuse when he bought a gun in 2018.

Many observers pointed to the Obama-Biden administration’s “Fast and Furious” operation, in which the ATF purposely allowed illegal sales of firearms in hopes of tracking the weapons to Mexican drug cartel leaders. Some of the guns were later found at crime scenes on both sides of the US-Mexico border, including the murder of US Border Patrol agent Brian Terry in 2010.

Sure, my Government has been giving dangerous weapons of war to this country’s enemies. See: Al Qaeda in Yemen/SyriaNeo-Nazis in Ukraine, and drug cartels in Mexico #fastandfurious

Others reminded the ATF of its past debacles, including the infamous and deadly Ruby Ridge and Waco sieges with the FBI. The Waco massacre ended with 76 people, including 25 children, being burned to death at a religious cult compound.

Two weeks after Valentine’s Day in 1993 the ATF went on a rampage against US citizens in Waco. They caused the deaths of 76 people, including 25 children and 2 pregnant women.Now they want you to swat your exhttps://t.co/iE7uZtUdWwhttps://t.co/1lM3PQJlET

Still other critics warned that the ATF’s suggestion could lead to “swatting,” as bitter exes might make false claims against former lovers in hopes of triggering an armed raid by law enforcement. Such raids have led to several deaths.

“What could go wrong when it comes to the ATF and swatting people for fun?” journalist Michael Praats asked.

Such vengeance doesn’t have to be limited to exes. The ATF said it welcomes crime tips about both former and current partners.