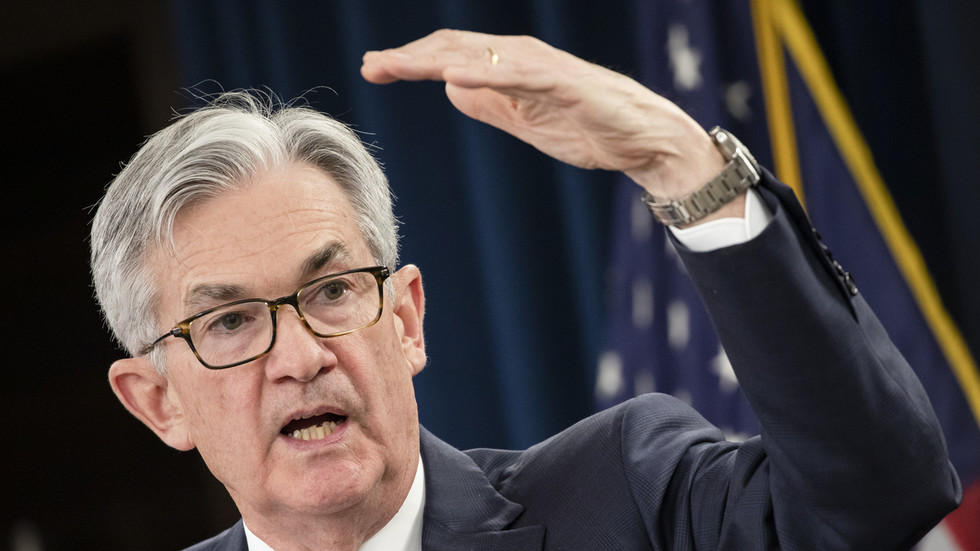 The US Federal Reserve’s Federal Open Market Committee has boosted its benchmark interest rate by 25 basis points, the first increase in over three years as the policymaking body seeks to rein in near-record inflation. The new rate will run between .25% and .5%.

In addition to the rate hike announced Wednesday, six more are planned throughout 2022, according to a statement from the privately-owned institution.

The Fed noted it “seeks to achieve maximum employment and inflation at the rate of 2% over the long run,” insisting the unemployment rate would finish out the year at a reasonable 3.5%. As of February, it stood at 3.8%.

The Fed also announced it plans to start offloading Treasury securities, agency debt and agency mortgage-backed securities in the near future. Chairman Jerome Powell told journalists after the meeting that the central bank could begin selling those assets as soon as May, producing the equivalent of another rate hike, which he was quick to pin on Russia.

Powell insisted the committee was “determined to take the measures necessary to restore price stability,” acknowledging the “risks of further upward pressure on inflation and inflation expectations.”

While the White House had initially claimed the soaring US inflation was only “transitory,” the Fed later admitted the problem was more serious than they believed and have belatedly attempted to wrestle it into submission.

Individual committee members admitted they expect higher-than-usual inflation, “reflecting supply and demand imbalances related to the pandemic, higher energy prices, and broader price pressures,” while projected GDP was downgraded from 4% to 2.8% – a drop blamed on the conflict in Ukraine.

“In the near term the invasion and related events are likely to create additional upward pressure on inflation and weigh on economic activity,” the committee said, acknowledging that beyond the “tremendous human and economic hardship,” they were uncertain what the conflict between Russia and Ukraine would ultimately bring.


Russian President Vladimir Putin hit back against the endless torrent of “blame Russia” narratives on Wednesday, telling “ordinary westerners” that they were being conned into blaming their own government’s problems on Moscow.

“You are being persistently told that your current difficulties are the result of Russia’s hostile actions and that you have to pay from your own pockets for the efforts to counter the alleged Russian threat,” Putin said in a speech. “All of that is a lie.”

The rush to hike interest rates at a pace not seen in years, in an attempt to bring inflation back under control, has been met with cries for caution from some experts, as the last time interest rates were raised so quickly, it triggered a significant recession. With certain parts of the US economy still not recovered from government-imposed pandemic policies, such an outcome could finish them off, critics said.

Some financial experts were less than sanguine about the prospect of multiple rate hikes over the course of the coming year, suggesting the ‘medicine’ might do more harm than good – even if it didn’t end up killing the patient.

“We might be on the cusp of the Fed raising rates at the same time there is a minus sign in front of GDP,” Peter Boockvar, chief investment officer of Bleakley Advisory Group, wrote in response to the Fed’s move, according to CNBC. “What an awful position to be in.”

US gas prices have reached record highs, surging 38% over the last 12 months, while grain and other food staple commodities are in short supply. Meanwhile, nearly all market indicators have outstripped the Fed’s 2% inflation target.