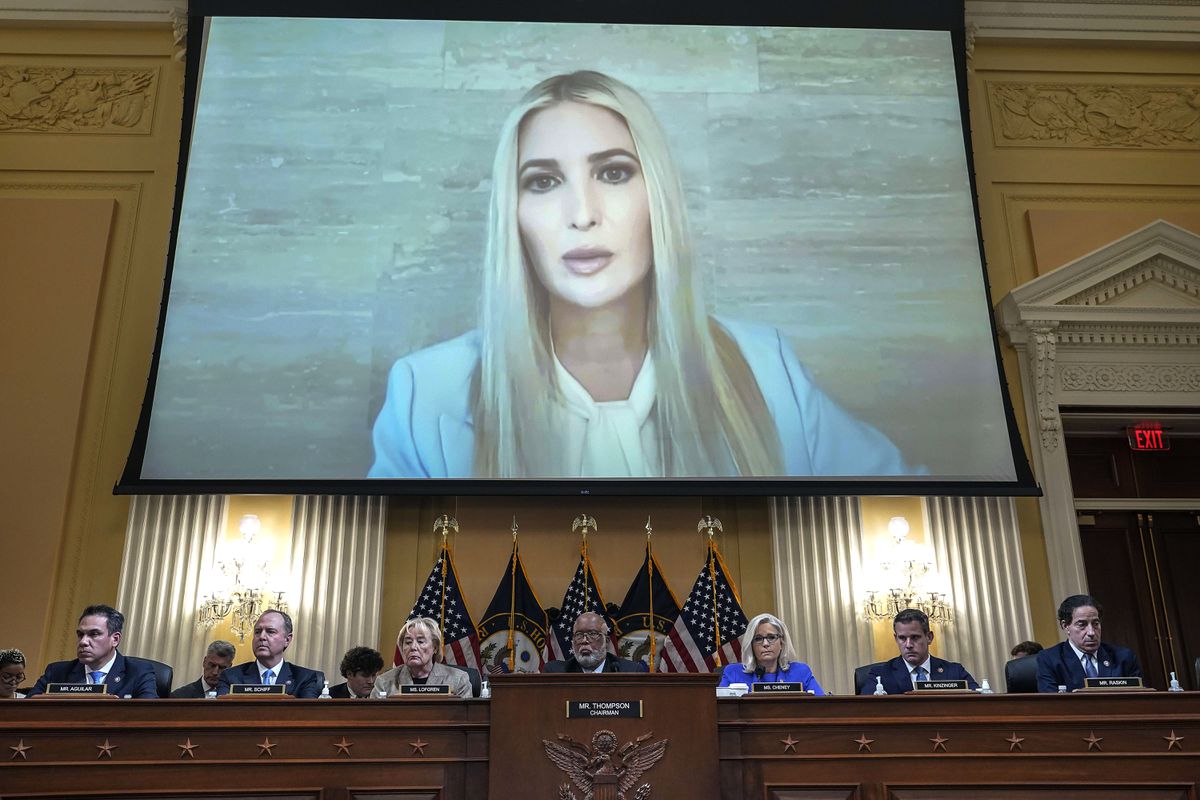 The House select committee investigating the insurrection at the US Capitol on January 6, 2021, began its first hearing on Thursday. The chair of the nine-member panel, Bennie Thompson, a Democrat from Mississippi, wasted no time in sharing his conclusions about what happened that day. “Jan 6 was the culmination of an attempted coup,” he said within the first 15 minutes of the hearing. “Donald Trump was at the center of this conspiracy.”

Following his address, the vice chair of the panel Liz Cheney – one of only two Republicans on the committee – presented previously unseen footage of the attack on the US Capitol, which was stormed by a pro-Trump mob in a bid to stop the session to certify the electoral victory of Joe Biden.

The House members at the hearing on Thursday squirmed in their seats as the new material was shown. Some shook their heads, others covered their face with their hand. The Democrat Pramila Jayapal broke into tears, and was handed a tissue by fellow Democrat Cori Bush. After the hearing, she told EL PAÍS: “We were there, we know how close we came to losing our democracy. And we also know how close we are to that happening. It’s important that the work of this commission yield results.”

Thursday’s hearing is the first of six that will seek to explain what happened on January 6. The findings are based on a nearly 11-month investigation, which interviewed more than 1,000 people and gathered over 140,000 documents. The hearing, which was broadcast at primetime and screened by most networks, with the exception of Fox News, has brought up comparisons to the 1973 Watergate scandal, which ended with the resignation of president Richard Nixon.

“We can’t sweep what happened under the rug. The American people deserve answers,” said Thompson in his opening statement on Thursday. “So I come before you this evening not as a Democrat but as an American who swore an oath to defend the Constitution. The Constitution doesn’t protect just Democrats or just Republicans.”

Cheney – who has been marginalized by the Republicans for openly opposing Trump and his false accusation that the 2020 election was stolen – had a similarly strong message for Trump supporters in her party. “There will come a day when Donald Trump is gone, but your dishonor will remain,” she said.

Using documents such as Twitter messages and emails, as well as witness testimony recorded during the investigation, Cheney showed how Trump and his supporters “deliberately” spread false election fraud claims, even though they knew that such claims were lies.

The very first piece of evidence shown during the hearing was a clip of former attorney general William Barr, who said: “I made it clear I did not agree with the idea of saying the election was stolen and putting out this stuff, which I told the president was bullshit.” Despite this, the former president continued to pressure officials to recount the votes. He also pressured his vice president, Mike Pence, to refuse to count the electoral results. “What president Trump demanded that Mike Pence do wasn’t just wrong, it was illegal and it was unconstitutional,” said Cheney.

Thompson explained that the January 6 insurrection was about more than one day, when Trump encouraged supporters at a rally to march on the Capitol, but was the culmination of months of planning. The former president was determined to hold on to power, despite the objections of those close to him. The hearing showed a recording of Trump’s daughter, Ivanka Trump, who tried to distance herself from her father’s actions. In a separate video, Trump’s son-in-law and former adviser, Jared Kushner, dismissed then-White House Counsel Pat Cipollone’s threats to resign in the lead-up to the January 6 siege as “whining.”

Thursday’s hearing also made it clear that during the insurrection, Trump did not listen to his advisers and allies such as Fox News presenter Sean Hannity, who told him to call off the mob. Instead, he watched from the White House as the protesters stormed the US Capitol, the cradle of US democracy, in his name. Four people were killed in the siege and another five people died in the following days.

A few hours before the hearing, Trump posted a message on his Truth social platform, arguing that the January 6 insurrection “was not simply a protest, it represented the greatest movement in the history of our Country to Make America Great Again.”

The hearing heard testimony from Caroline Edwards, a police officer who was seriously injured, along with hundreds of other officers, while trying to stop the pro-Trump mob, which included members of far-right organizations, such as the Proud Boys and the Oath Keepers.

“I couldn’t believe my eyes: There were officers on the ground. They were bleeding. They were throwing up,” said Edwards, who suffered a traumatic brain injury during the attack. “I saw friends with blood all over their faces. I was slipping in people’s blood. I was catching people as they fell. It was carnage. It was chaos. I can’t even describe what I saw. Never in my wildest dreams did I think that as a police officer, as a law enforcement officer, I would find myself in the middle of a battle,” she recalled. “I’m trained to detain a couple of subjects and handle a crowd, but I’m not combat trained. That day, it was just hours of hand-to-hand combat.”

British documentary filmmaker Nick Quested also testified at the hearing. He explained that he had been following the Proud Boys in the leadup to the insurrection with the idea of making a documentary about them. Quested told the panel that on January 5, he saw Enrique Tarrio, the leader of Proud Boys, meet with Steward Rhodes, the leader of the Oath Keepers, in a parking garage in Washington – even though a judge had ordered Tarrio to leave the District of Columbia following a previous arrest. Quested was also present at the pro-Trump rally on January 6. “I documented the crowd turn from protestors, to rioters, to insurrectionists,” he told the hearing on Thursday.

The panel also showed a recorded interview with Robert Schornak, who was sentenced to 36 months of probation for his involvement in the siege. In the video, he explained: “What really made me want to come was the fact that I had supported Trump all that time, I did believe that the election was being stolen and Trump asked us to come.” He continued: “Trump has only asked me for two things. He asked me for my vote and he asked me to come on January 6th.”

Jamie Ruskin, a Democrat from Maryland and one of the most high-profile faces of the panel, appeared at the hearing with a copy of Thomas Paine’s famous 1776 pamphlet Common Sense. He expressed his dismay at how an “absolute lie” was able to trigger the violence seen on January 6, and offered words of consolation to officer Edwards, and her colleague Harry Dunn, a nearly two-meter tall officer, who wore a shirt with the definition of insurrection: “a violent uprising against an authority or government,” followed by a date: “January 6, 2021.”