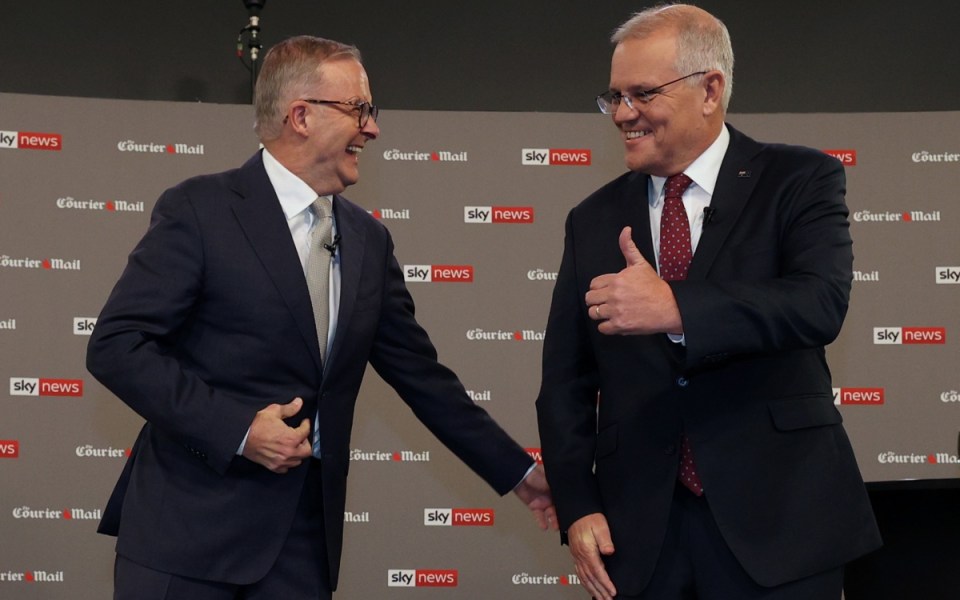 The vote among the 100 undecided voters at Wednesday’s Sky News/Courier Mail people’s forum was a modest 40 per cent victory for Anthony Albanese.

Morrison was rated the winner by 35 per cent of the audience, while some 25 per cent were undecided.

The debate won’t have any great impact on the election. These encounters usually don’t, regardless of the hype.

But the result was important to Albanese for negative reasons. If he had had a disaster, it would have been a fresh setback just when he seems to be getting back on his feet after last week’s problems. And it would have hit his confidence for six.

Morrison’s strong theme, unsurprisingly, was the economic one. The election is a choice – all about the economy, with the flow-on effects for families, the communities, and services.

He claimed the mantle for Labor as the party that did the “big reforms”, notably the National Disability Insurance Scheme. Morrison countered that it was always the Liberals and Nationals “who have to work out how to pay for these things”.

The PM attracted negative comments from critics on social media when, in answer to a question from a mother with an autistic child, he said he and Jenny were “blessed – we’ve got two children who haven’t had to go through that”.

The Opposition Leader was stronger than Morrison in response to questions on integrity and people’s disillusionment with the political system.

But he made the one significant stumble of the night. He seemed flummoxed when Morrison challenged him on why, when he was deputy PM in 2013, he didn’t support boat turnbacks.

He replied, “you weren’t proposing that then,” which Morrison could knock down as untrue.

Albanese sought to dig himself out of the hole with the line, “Why is it, Scott, you’re always looking for a division, not looking for an agreement?”

It was a strange error given that Albanese knew he would be pressed on this area, perhaps underlining he is still uncomfortable with his history on turnbacks, on which he has had to do a complete U-turn.

But if he can convince voters he’s firm on border policy for the future, arguments about 2013 are not likely to resonate strongly.

Another notable moment came when the two debated the government’s performance in relation to the Solomon Islands’ security pact with China, which had received a workout on the campaign trail earlier on Wednesday.

The government has been anxious to have national security as a major plank in its campaign but until now, despite all the hardware announcements, it hadn’t featured much.

Then came the signing of the long-mooted security pact – in spite of Australian diplomatic efforts to head it off.

At first glance, this might have seemed likely to play into the government’s hands, by reinforcing the narrative of an expansionist China and turning the situation into a wedge against Labor.

But Labor jumped onto the offensive early Wednesday, with shadow foreign minister Penny Wong telling the ABC, “This is the worst failure of Australian foreign policy in the Pacific since the end of World War II”.

Labor attacked the government’s sending “a junior woodchuck”, the minister for the Pacific, Zed Seselja, to the Solomons at the last minute.

Morrison insisted at a news conference the government had done all it could and that it had been more appropriate to have a junior minister go rather than the foreign minister. That made it clear Australia was “not looking to go and stamp around” but was dealing with the Solomons respectfully.

But his argument was somewhat undermined when former foreign minister Julie Bishop told Ten that Payne “should be on the next plane” to the Solomons.

Come the leaders’ face-off in the debate and Morrison, on the spot, went for the wedge. He asked, why did Labor take China’s side on this, suggesting “somehow it’s Australia’s fault”?

Albanese hit back at what he described as “an outrageous slur”. The Opposition Leader said this was “not so much a Pacific step up” but “a Pacific stuff up”.

The truth, however, is that whether or not she should have been sent, Payne probably would not have had any more success than the “junior woodchuck” and no Australian government could necessarily have prevented the pact.

The 25 per cent of the audience who came out of the debate with no firm view was another pointer to the fact there are many undecided votes floating around, with more than four weeks to go in this campaign.

These are up for grabs by not just the major parties but the minor parties and independents. It still looks to be a very fluid contest.

This article is republished from The Conversation under a Creative Commons licence. Read the original article.