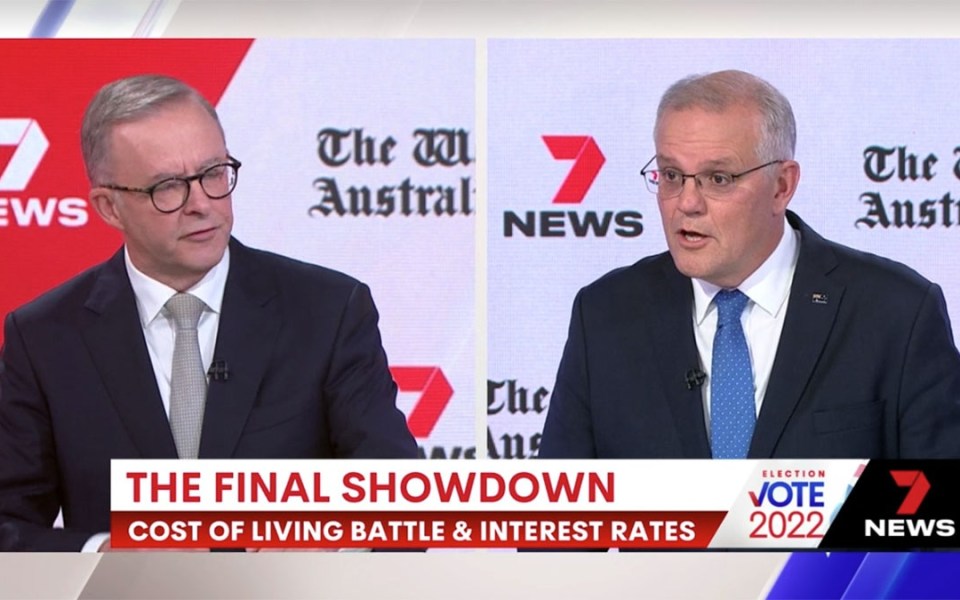 Undecided voters in a series of marginal seats around Australia have judged Anthony Albanese as the winner of third and final leaders debate hosted by Channel 7 on Wednesday night.

In a sign of the uphill struggle facing Prime Minister Scott Morrison on May 21, the 160 undecided voters in a series of close seats – dubbed the National Pub Test – overwhelmingly preferred the election pitch of the Opposition Leader.

Overall, Mr Albanese captured 50 per cent of the audience vote to Mr Morrison’s 34 per cent. About 16 per cent were still to choose what party they will support at the ballot box.

Mr Albanese’s performance was deemed superior in six of the seven seats surveyed.

Voters in the Western Australian seat of Hasluck were the exception, as they judged the debate a draw, with each of the leaders attracting 44 per cent of the vote, and 12 per cent remaining undecided.

Those in the New South Wales seat of Macquarie – described as the most marginal seat in the nation – awarded the Labor leader 50 per cent of the vote, with only 25 per cent plumping for the Prime Minister. A quarter were undecided.

The result was replicated in the Northern Territory seat of Solomon.

Mr Albanese scored decisive wins in the Tasmanian seat of Bass and South Australian seat of Boothby, with a 52-32 margin (16 per cent undecided).

The Victorian seat of Chisholm, which is held by Liberal Gladys Liu on a 0.5 per cent margin, opted for Mr Albanese (52 per cent) over Mr Morrison (35 per cent), with 13 per cent still to decide.

The Queensland seat of Lilley was closer, with a 54-41 result and only 5 per cent undecided.

Mr Morrison and Mr Albanese traded barbs on wages growth and cost-of-living pressures in the debate labelled the final showdown – just nine days before the May 21 election.

Mr Albanese said low-wage workers, including cleaners and aged care employees were “heroes of the pandemic” and deserved “more than our thanks”.

“I want a better future where we deal with the cost-of-living crisis where everything is going up except for people’s wages,” he said.

The Opposition Leader said a 5 per cent minimum wage increase amounted to “two cups of coffee a day”.

Mr Morrison said he also backed a wage rise for all workers, but small businesses across the country would struggle with that increase in their wages bills “on top of all the other things they’re facing”.

Both leaders were asked about the shift towards independents and micro parties among voters, and what they thought was driving it.

Mr Albanese said there was a great deal of disillusionment with major parties.

Mr Morrison was asked to justify his criticism of his opponent when he labelled him the “most dangerous leader since Gough Whitlam”.

He said Mr Albanese “has been very loose” on economic policy and “makes things up as he goes along”.

In response, Mr Albanese slammed the Prime Minister over his handling of the Covid-19 pandemic and natural disasters.

When asked what trait they admired in each other, Mr Morrison said it was Mr Albanese’s rise from “humble beginnings” to become the leader of the Labor Party.

Mr Albanese said the Prime Minister was committed to the nation and had invested heavily in mental health.