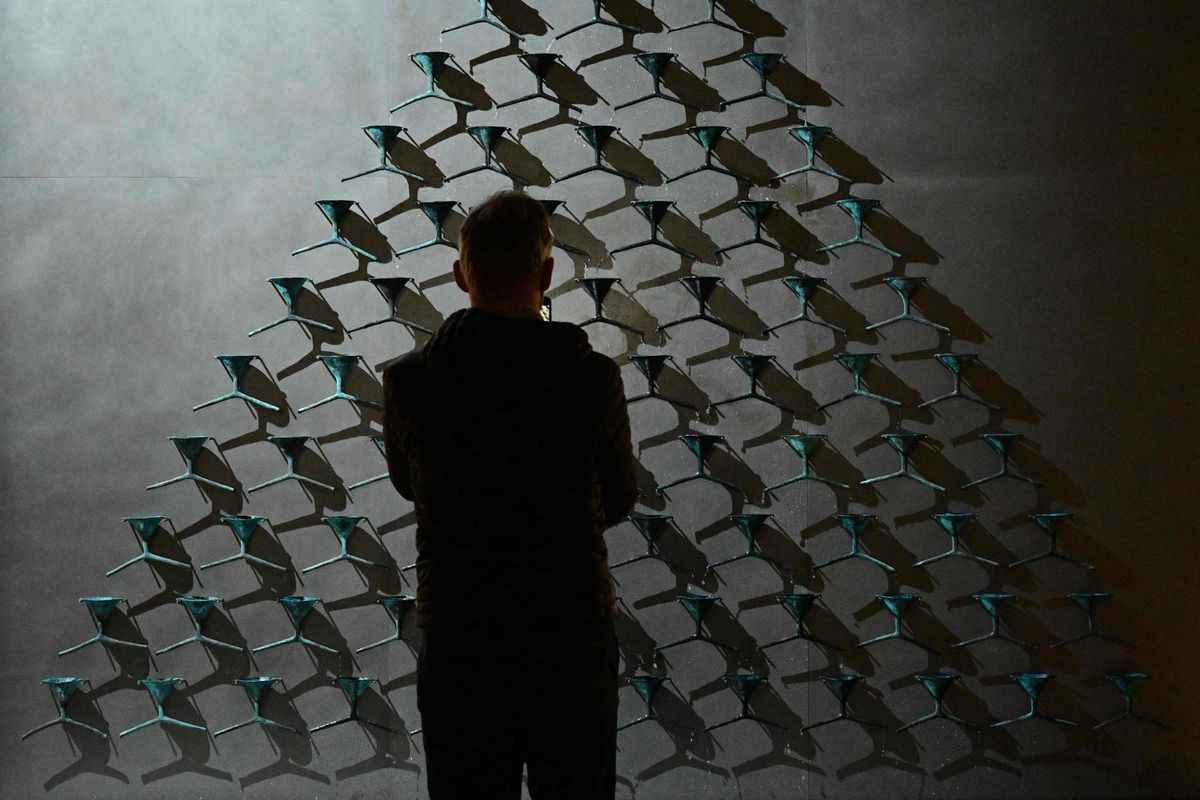 Can art be made after the Bucha massacre in Ukraine? It’s a question that echoes the sentiments of German philosopher Theodor Adorno, who wrote in 1949: “To write poetry after Auschwitz is barbaric.” And it’s one that was in the air on Wednesday at the presentation of the Ukrainian pavilion at the Venice Biennale, which has gone ahead despite the difficulties posed by the Russian invasion.

Representing Ukraine is artist Pavlo Makov and his sculpture Fountain of Exhaustion, a pyramid of 78 funnels, set in eight tiers, through which water flows, which is displayed in the Arsenale venue. The installation was first designed in 1995 to express the sense of exhaustion felt in Ukraine after the fall of the Soviet Union. But Makov explained on Wednesday: “In the current context, it seemed to me that the metaphor was still valid, only in a more brutal and terrifying version.”

Getting the sculpture to Italy was not an easy feat. A few hours after the war broke out, one of the pavilion’s curators, Maria Lanko, loaded her car with several works of art – including the 78 bronze funnels of Fountain of Exhaustion – and drove for six days until she reached Italy. The funnels were then welded in a workshop in Milan with the financial support of the Biennale. The inauguration of the Ukrainian pavilion was a small symbolic victory.

But the pavilion is not the only part of the Venice Biennale that makes reference to the war against Ukraine. Given the prestigious art even is divided into pavilions from different countries, politics is never very far away. In the Giardini, the other Biennale venues, the organizers have erected an open-air exhibition, called Piazza Ucraina, which brings together dozens of posters that reproduce works created by the country’s artists since the beginning of the war, and are displayed among sandbags and charred wood.

The war against Ukraine is not explicitly reflected in the main show, as the 213 artists were selected to participate before the start of the Russian invasion. But the curator of the Venice Biennale, Cecilia Alemani, did include two last-minute additions. The main exhibition features a gouache called Scarecrow by Maria Prymachenko, a self-taught Ukrainian artist who began painting in the 1930s. The Ukrainian museum that housed most of her paintings was destroyed in February by Putin’s army.

While another room features a large-scale print of La consagración, a three-part painting by late Cuban artist Belkis Ayón. The original piece belongs to the Ludwig Museum in Saint Petersburg and could not leave Russia for obvious reasons. “Instead of leaving a hole in the wall, I wanted it to be a ghost work,” said Alemani next to the reproduction. “With the war in Ukraine, it’s hard to think what’s the point of putting on an exhibition or creating art. My hope is that we can think of the Biennale as a place where dialogue between people can continue, and within which we can see art as a bridge between nations,” said Alemani, during the opening press conference.

This issue was also addressed by the curators of the Ukrainian pavilion. “Many wonder what is the point of allocating funding and efforts to promote Ukrainian art. But we are really investing in our future,” said Lizaveta German, another of the curators of the pavilion, Ilya Zabolotnyi, the head of the Ukrainian Emergency Art Fund, which provides funds for the country’s art scene, also sent a similar message from Kyiv: “Culture is not a set of objects, but a system that defines what is important for a country. We cannot wait for the war to end to prepare for the future. We have to start rebuilding now and culture helps us to do it.”

Regarding whether art can be used to bring people together, as suggested by Alemani, Makov was circumspect. “The only dialogue we have now with the Russian culture is on the front,” said the artist. When the troops return to Moscow and the war criminals are brought to justice, we can start talking,” Makov replied. “First, Nuremberg. Then culture.”

Meanwhile, there is no Russian pavilion at this Biennale. The curator and the two artists who were to feature withdrew from the event in February. “There is no place for art when civilians are dying under the fire of missiles, when citizens of Ukraine are hiding in shelters, when Russian protesters are getting silenced,” said one of the pavilion’s curators, Kirill Savchenkov, after his resignation.