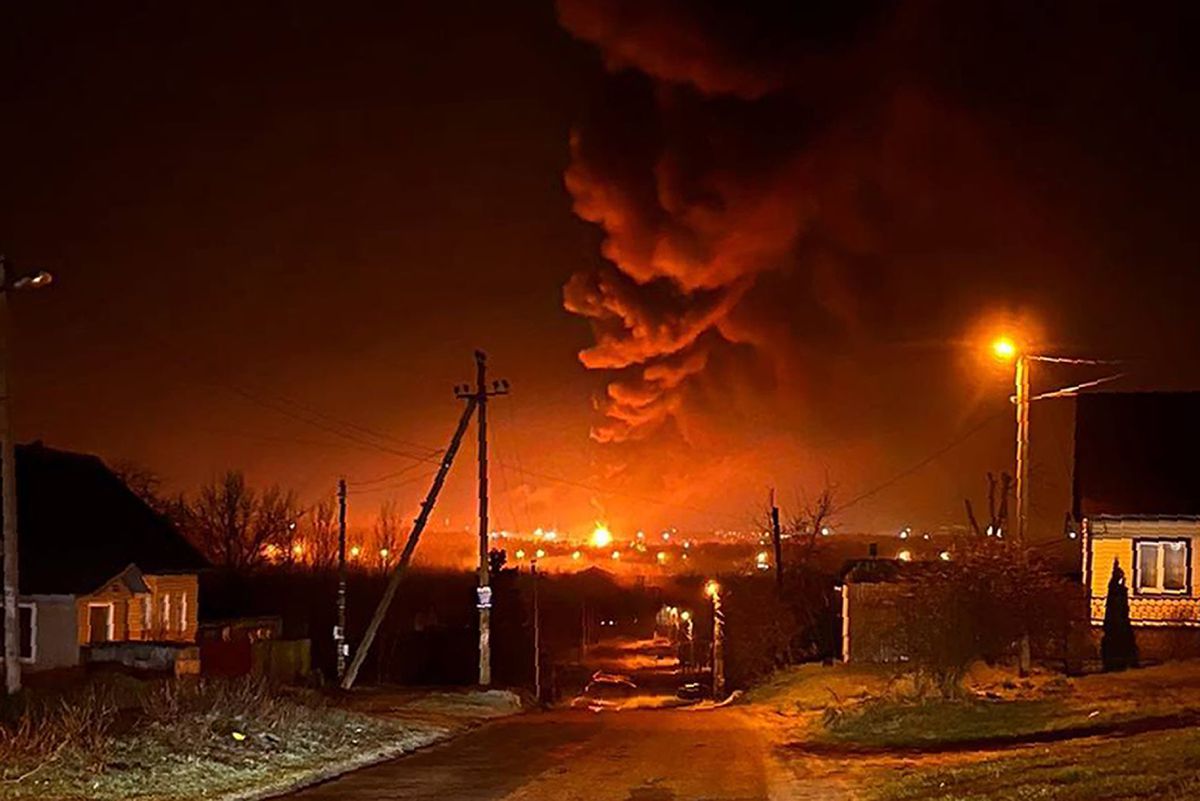 A series of incidents that Moscow is blaming on the Ukrainian government have raised tensions in Russia in the past month. First there was a string of fires at military factories, followed by the arrests of alleged Ukrainian saboteurs said to be part of a gang that calls itself “Maniacs: cult of murder,” among other alleged enemy cells. Kyiv has alternatively responded with silence, ambiguous answers and accusations that Russia is fabricating pretexts for its offensive.

The Kremlin has repeatedly threatened to take action if attacks on its territory continue. Russian President Vladimir Putin went so far as to say a week ago that his country will deliver “a tough response” if the West encourages Ukraine to attack Russian territory. On Thursday, the governor of Belgorod asserted that several houses in a border town had been destroyed by an alleged strike. There were no victims, as on previous occasions.

Mikhailo Podolyak, an adviser to the Ukrainian presidency, said ironically on April 27 that the fires and explosions produced in several border regions would be a kind of “demilitarization”, one of the conditions that the Kremlin demands of Kyiv for peace. Despite rumors accusing Kyiv of all the fires that have occurred since April throughout the country, Podolyak only pointed to three neighboring regions as possible targets: Belgorod, Voronezh and Kursk.

Despite the proximity of May 9, when Russia will observe “Victory Day,” which commemorates the country’s defeat of the Nazis in 1945, so far the alert level has only been raised in four regions bordering Ukraine and in the Crimean peninsula that Russia annexed in 2014, and the measure was not taken until well into April, more than a month and a half after the offensive began. Specifically, it is in force in the oblasts (provinces) of Briansk, Kursk, Voronezh and Belgorod, located north of the fighting, and in the middle of the Black Sea peninsula. That is, places where a Ukrainian military attack could reach. The measure does not affect Rostov, which borders the separatist territories of Donetsk and Luhansk, nor Krasnodar, which is separated from Ukraine by the Sea of Azov.

The first strike on Russian soil came on April 1, when the governor of Belgorod reported that two helicopters belonging to the Ukrainian air forces had attacked a fuel depot located a few kilometers from the border. The secretary of the Ukrainian Security Council, Oleksiy Danilov, responded ambiguously when asked about the authorship of the attack. “They say we did it. According to our information, that is not true. They must understand that this can happen throughout the territory of Russia.”

After that incident, similar events occurred in areas near Ukraine. On April 27, two fuel depots in Bryansk and an ammunition depot in Belgorod went up in flames. In Voronezh and Kursk, regional authorities claimed to have detected Ukrainian drones. Two more military facilities have burned in recent weeks, although Russian authorities said they were accidents.

On April 14, several explosions occurred in the town of Klimovo, 10 kilometers from the border. Moscow accused Kyiv of bombing the area, and the Ukrainian government said it was a setup “to foment anti-Ukrainian hysteria.” Seven people, including a pregnant woman, were injured, the town’s central hospital told the Russian news agency Tass.

On April 21, another fire broke out at the headquarters of the Second Research Institute of the Ministry of Defense, located in Tver, a province near Moscow. On May 1, a gunpowder factory in Perm burned down, causing three fatalities. Components for the Grad multiple rocket launchers are produced at this facility east of Moscow, weapons that are also used in Ukraine.

The Russian Federal Security Service (FSB) usually announces the dismantling of terrorist cells every week. One of the largest operations of this type since the conflict began was announced on March 30. Authorities said they had arrested 60 members of the MKU gang, “Maniacs: Cult of Murder” in Russian, across the country. The FSB defines it as “a youth and neo-Nazi group created by the Ukrainian special services to commit terrorist acts, massacres and extremist crimes in Russia.” Last year the FSB arrested dozens of alleged members in several waves, accusing them of coordinating with Kyiv to promote street protests after the arrest of the opposition leader Alexey Navalny in January 2021. In earlier arrests, however, gang members had never been associated with Kyiv, either by Russian authorities or the media.

The MKU emerged in Ukraine in 2018 and quickly went viral across the border. Its members beat up immigrants and the homeless, and then uploaded the videos to their Telegram channels. In the Ukrainian city of Dnipro alone, more than 30 attacks were recorded in 2019, while in Russia there were several more cases a year later. Both the BBC and Nastoyásheye Vremia have investigated its members and found them to be just another neo-Nazi street gang without political ties.

Arrests of suspected Ukrainian saboteurs have also intensified as the conflict has progressed. Among others, the FSB reported on April 28 the arrest in Crimea of a former Ukrainian soldier who, “on the instructions of the nationalists of the Azov battalion, was preparing an explosion in a shopping center in Simferopol.” And a day earlier the agency announced the capture in Belgorod of two Russian citizens who, according to the FSB, sent information on Russian troop deployment and infrastructure to the Mirotvorets website, which in the past has published the addresses of Ukrainian politicians and journalists.

The FSB said on April 25 that it had dismantled a cell of the National Socialism-White Power organization that was planning to attack two prominent Kremlin propaganda figures on instructions from the Security Service of Ukraine (SBU).

Accusations that Ukrainian troops were breaking into Russian territory had been made even before Vladimir Putin ordered his troops to advance on February 24. Three days earlier, the Defense Ministry said it had destroyed two BMP transport vehicles and killed five Ukrainian soldiers who had allegedly broken across the border. That day, Moscow also accused Ukraine of having bombed a border checkpoint that was empty in the middle of a forest.