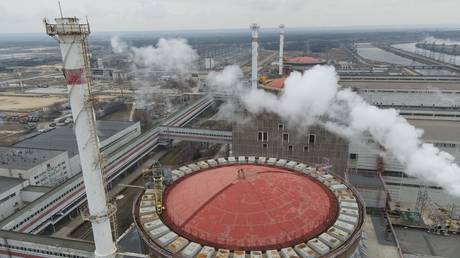 Kiev’s attacks against Zaporozhye Nuclear Power Plant are an attempt to cause mayhem, Foreign Ministry in Moscow claims

Drone strikes on Zaporozhye Nuclear Power Plant by Ukraine appear to be an attempt to engineer a massive industrial disaster, and with the connivance of the West, Deputy Spokesperson for Russia’s Foreign Ministry Ivan Nechaev said Wednesday.

“Ukraine’s armed forces are obsessively staging strikes on Zaporozhye Nuclear Power Plant, which is the largest in Europe, with total disregard for its safety or IAEA’s decisions and its resolutions,” Nechaev told a weekly news briefing, referring to the International Atomic Energy Agency’s numerous rulings that deem attacks against civilian nuclear facilities to be violations of international law.

“It is now obvious Ukraine is deliberately going for a massive industrial disaster. And we’re seeing that both the US and their European allies are completely fine with it,” Nechaev concluded.

Currently under the control of Russian forces, Zaporozhye Nuclear Power Plant, located in Energodar, southeastern Ukraine, has been a target of several strikes in the past few weeks.

On July 12, Ukrainian drones dropped several 120mm shells on a building located next to the power plant, injuring 11 employees, Energodar authorities confirmed. On July 20 three Ukrainian “kamikaze drones” attacked the plant, with no damage to its structures reported.

Back in April, the head of Russia’s Radioactive, Chemical, and Biological Protection Forces, Lieutenant General Igor Kirillov, said a ‘false-flag operation’ could be staged on one of Ukraine’s nuclear energy facilities, including on the Zaporozhye plant.

Ukrainian authorities have in turn accused Russia of attacking the plant. In early March, as Russian forces were advancing in Zaporozhye, Ukraine’s president Vladimir Zelensky said the plant was intentionally shelled by Russia in an attempt to “recreate the Chernobyl disaster.”

On July 21, the president of Ukraine’s state nuclear operator Energoatom, Petro Kotin, told Ukrainian media that Russian forces have deployed heavy weapons within the machine hall of Zaporozhye’s first unit, with munitions and fuel stored nearby. According to Kotin, even though the plant’s first unit has been out of service since the start of Russia’s offensive, these weapons and munitions represented a “fire hazard.”

Russia sent troops into Ukraine on February 24, citing Kiev’s failure to implement the Minsk agreements, designed to give the regions of Donetsk and Lugansk special status within the Ukrainian state. The protocols, brokered by Germany and France, were first signed in 2014. Former Ukrainian President Pyotr Poroshenko has since admitted that Kiev’s main goal was to use the ceasefire to buy time and “create powerful armed forces.”

In February 2022, the Kremlin recognized the Donbass republics as independent states and demanded that Ukraine officially declare itself a neutral country that will never join any Western military bloc. Kiev insists the Russian offensive was completely unprovoked.