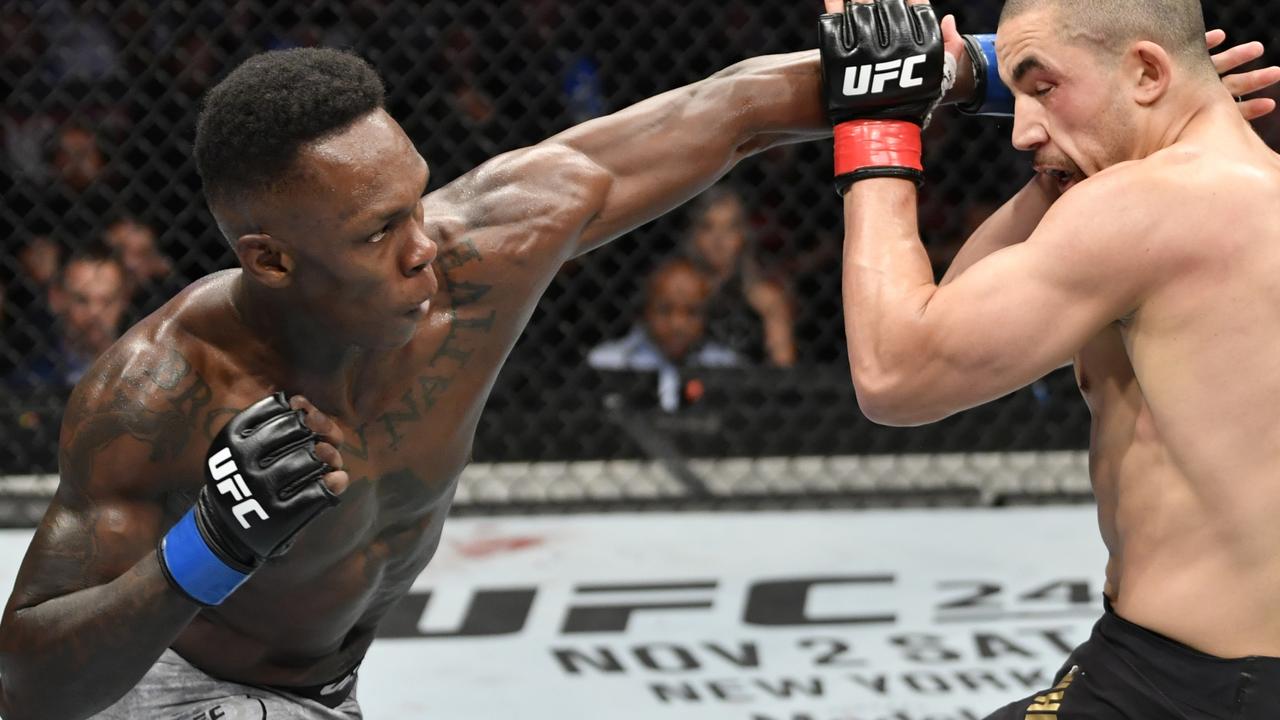 Israel Adesanya has opened up on the hyped striking improvements of arch rival Robert Whittaker — and he didn’t miss.

Israel Adesanya says UFC commentators are overhyping the improvements to Robert Whittaker’s striking game, while also laughing off suggestions the Australian no longer hates him, stressing “that’s a lie”.

While it has now been two years since he dethroned Whittaker as UFC middleweight champ, Adesanya enters Sunday’s UFC 271 rematch convinced he still owns serious real estate in the head of his Trans Tasman rival.

The 32-year-old also says there is no way Whittaker stands and trades in their hyped Houston, Texas headliner, despite the Aussie having worked extensively this camp with both famed boxing coach Johnny Lewis and super welterweight contender Tim Tszyu.

In fact, the outspoken New Zealander says while Whittaker has made some gains in his run of three straight wins since being kayoed in 2019, they have been largely overblown by commentators and media.

That win followed on from a 2020 bout where Whittaker landed 65 significant strikes to the head of American rival Jared Cannonier — while absorbing just nine — and, before that, besting Englishman Darren Till with an effort even the fighter himself described as “the most technical striking fight I’ve ever had”.

“And Rob has proved himself,” Adesanya concedes when asked if his famed arch rival deserved a rematch.

“Or his revised skills set as people like to say.”

At which point, and around the word revised, the champ motioned to make a pair of quotation marks.

So his striking gains aren’t so strong as the hype suggests?

“There are changes, but it’s not as drastic as people are saying.

“And he’s not going to strike with me.

“So come this weekend, I’ll look forward to the grapple, to the scramble, because he’ll be surprised there as well.”

Pushed on the improvements, or otherwise, of Whittaker since their first encounter, Adesanya continued: “I saw a clip recently where he said ‘I’m not the same Robert as 2019’.

“But I’m not the same fighter, either.

“He isn’t the only one evolving. I’m evolving too – and rapidly.

“So he isn’t special in that facet.

“There are levels to this game and people are about to see what those levels are.”

After losing his strap to Adesanya in 2019, Whittaker later told The Daily Telegraph his performance had been impacted by not only severe mental and physical burnout, but also the pair’s heated rivalry, saying: “All that hatred, that anger … it wore me out”.

Yet speaking recently, Whittaker insisted he no longer held any ill will towards the Kiwi – “I don’t even hate the guy anymore” — and had no fears about his famed verbal tongue fu leading into another fight week.

To which the champ says what?

So he does hate you?

“You just watch,” the champ continued.

“Have fought the guy.

“Even our fight now, it’s been rescheduled how many times? So I’ve spent some time studying the guy.

“Many men wish death upon me,” he shrugged.