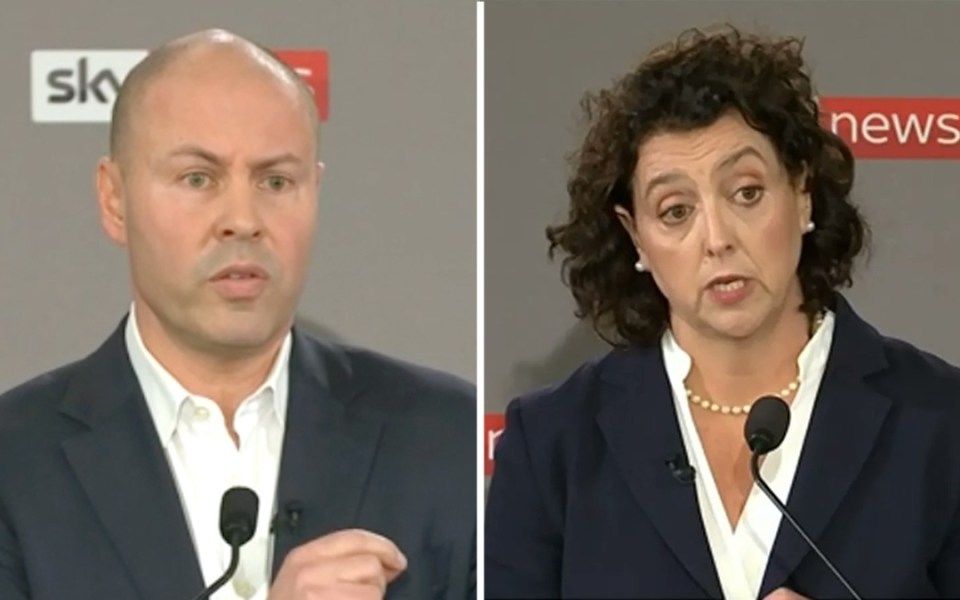 Treasurer Josh Frydenberg has clashed with his key independent challenger in an at-times heated debate in Kooyong – as the government steps up its attack on the unaligned candidates it faces in blue-ribbon Liberal seats.

Mr Frydenberg and Dr Monique Ryan went head to head in front of undecided voters in the the heart of his Melbourne electorate on Thursday afternoon, in a confrontation that was sometimes personal.

It took just two questions on climate change policies and electric vehicles in the debate for each to question the other’s integrity.

Dr Ryan claimed Mr Frydenberg was not a “moderate liberal” because he had never crossed the floor in his 12 years in parliament.

“This is a man who votes with Barnaby Joyce, every time, against what is essentially our national interest,” she said.

Mr Frydenberg said he was “happy to take fair criticism about the Liberal Party’s positions on certain policies”. But he accused Dr Ryan of trying to hide that she was once a Labor Party member.

“What I’m worried about, and hopefully what my local community’s worried about, is if they go for a so-called independent, the likelihood of a hung parliament becomes all that more real,” he said.

The debate finished with questions on the pros and cons of a parliament without a clear majority – considered likely if some of the teal challengers are successful on May 21.

Dr Ryan said such a result would be better for Australia.

“The only bill that’s been taken to parliament for an independent commission against corruption was Helen Haines, an independent. And the person who led the movement to stop the religious discrimination bill was Rebekha Sharkie, an independent,” she said.

“If independents like me are in a position where there is a hung parliament after the election, and we do have even more of a position to influence the government. I think that will be a positive thing”

But Mr Frydenberg used the example of managing the pandemic to argue it was better for a government to be able to pass legislation without negotiating with cross-benchers.

“With JobKeeper, we were able to move really swiftly because we knew we had the confidence of the lower house, and we couldn’t make a decision such as that if we had to negotiate with the cross bench to reach a decision on the type of program and the levels of the support and how it would be delivered,” he said.

“Similarly, if the Prime Minister of the day could not reach an agreement like AUKUS with the United Kingdom and the United States because he didn’t have the authority of a majority in the lower house, then that would be counterproductive to Australia’s national interest. And so on the big issues of economic security and national security, we need the stability of government.”

There was also anger from Mr Frydenberg after Dr Ryan accused him of being “treasurer for NSW” and being unaware of the strain on Victoria’s health system during the pandemic.

“You weren’t here. Anyone who’s had experience of a Victorian public hospital in the past few years knows what it’s like because we have people dying in hospitals, on ramps and people waiting years for elective surgery,” she said.

Mr Frydenberg snapped back about his record – including listing his extended family’s extensive work history in medicine.

“I’m not going to be insulted by that saying I’m the treasurer for NSW. I’m the member for Kooyong. I’m the Treasurer of Australia. And I have delivered economic support for Victoria, which is greater than any other state on a per-capita basis,” he said.

Earlier on Thursday, Prime Minister Scott Morrison ramped up his rhetoric against the independent challengers, warning of chaos and instability if they won seats.

“[With] a cavalcade of independents, you are inviting chaos and weakness, a strong economy versus a weak economy.”

Mr Morrison has been accused of avoiding inner-city seats such as Kooyong – as well as neighbouring Goldstein and the Sydney seats of Wentworth and North Sydney – where sitting Liberal MPs face tough challenges, largely due to his unpopularity with voters.

He made his fifth visit of the campaign to the Labor-held seat of Parramatta on Thursday, where he warned that independent candidates elected to parliament would inhibit the strong leadership Australia required to face economic and security challenges.

Tasmanian independent Andrew Wilkie described that as a “shameful slur” and said it proved how threatened the Coalition was by the independent challengers in Liberal-held seats.

“The allegation by the Prime Minister … that independent parliamentarians and candidates are a threat to Australia’s security is a shameful slur on decent people exercising their democratic right to stand for election,” he said in a statement.

“It’s also symptomatic of a government becoming increasingly hysterical at the realisation it’s out of step with a great many Australians.”

Opposition Leader Anthony Albanese has said he will both the crossbench and a Liberal-Nationals opposition, even if Labor wins a majority on May 21.