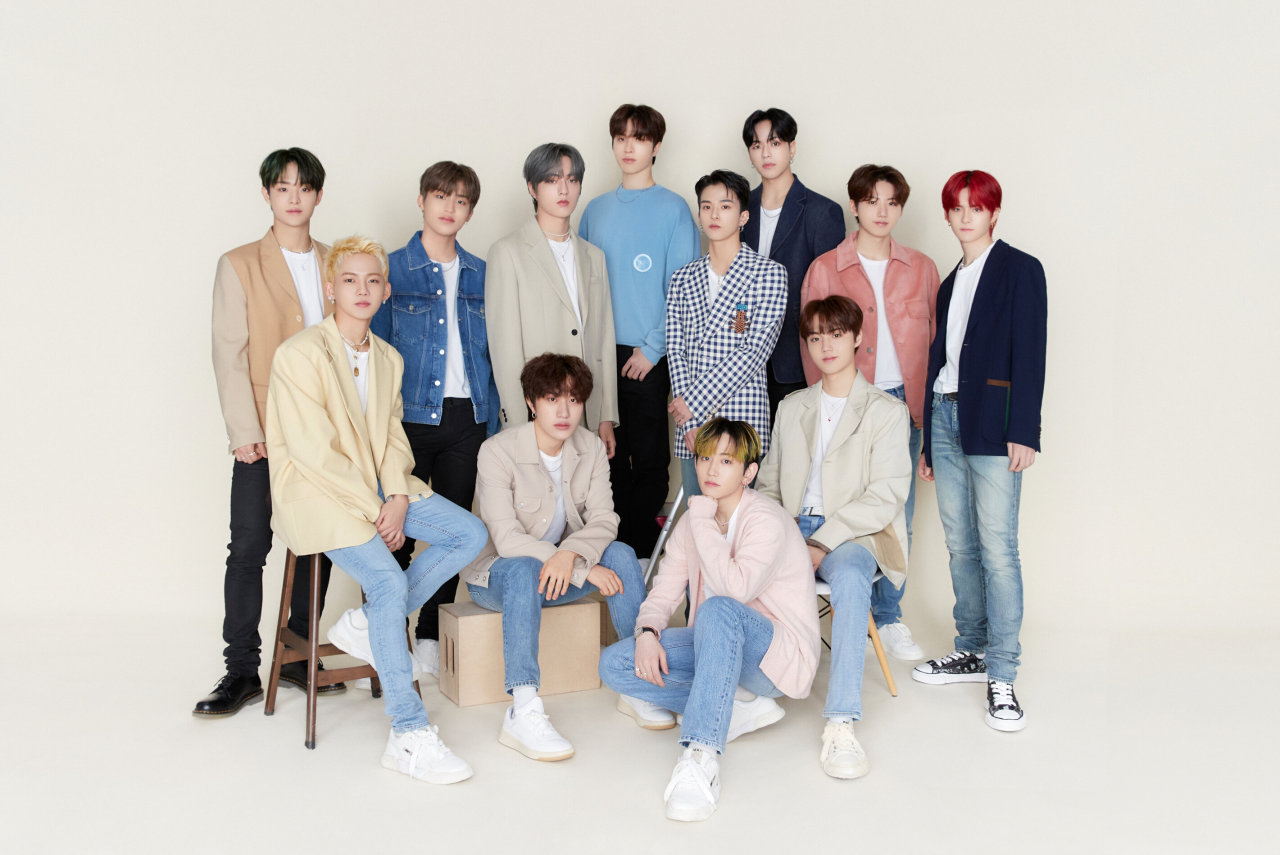 Ahead of making a return with their latest EP “The Second Step: Chapter One” on Tuesday, the twelve-member group conducted a press conference and discussed the release and its lead single “Jikjin.”

Over the past year, the boys spent their time gearing up to open up the second journey in their career. In January 2021, the band dropped their first studio album “The First Step: Treasure Effect,” wrapping up the group‘s first series of single releases.

“We’re taking our first leap into our new adventure with this album. If the ‘First Step’ series had declared Treasure’s start, the new album will show what we are good at,” Jihoon said during Tuesday’s event.

Leading the new album is “Jikjin” — which in Korean means to “go straight” — a song that shows the color and direction of Treasure’s next path. A hip-hop tune of speed and power never before seen from the group, the boys said “Jikjin” boasts a sound that’s true to the musical identity of their label, YG Entertainment.

“When we first heard it in October, we all felt that this was the song for us. We couldn’t have anything else as the title,” Hyunsuk added, while the other leader Jihoon said, “We felt like we found the right clothes for us.”

The song gushes out relentless speed and tension in the beginning as the vocal and track switches to the beat, before taking an abrupt turn at the chorus with a minimal yet addictive hook.

YG took it far to give a breakout comeback for the rookies, investing a whopping 500 million ($417,470) won into the music video production, a budget which the label explained is normally reserved for established high-profile artists such as Blackpink.

In the blockbuster music video, the boys race at full speed in super cars — not just one, but several, as stressed by Mashiho.

“I don’t have a license so I couldn’t actually drive, but just sitting inside the car was fun,” Asahi said, while Yoshi, also unlicensed, added, “I tried to act like it was real, practicing looking at the mirror and holding the handle in different positions.”

The perfectly synchronized group performance is another point to watch from the music video, the members stressed.

“If our group dances had been more focused on power before, in ‘Jikjin’ the members were able to add their own details to the basic moves,” Doyoung explained.

Yoshi added, “But we still didn’t lose the perfect conformity. For example, in scene where all 12 of us stand in a single line, we made agreements on not only on when we should move, but to the small details of our arms and legs, and on how far we should jump.

An album to show their unique colors, “The Second Step: Chapter One” was contributed in many parts by the members themselves.

The rapper members Hyunsuk, Yoshi and Haruto took part in writing the rap verses of “Jikjin” and several other songs on the EP, while Hyunsuk contributed in the song “BFF (Best Friends Forever),” which was unveiled as part of the OST of the group’s web drama series, “The Mysterious Class.”

“I was honored to hear the song would be used in the series. I’ll be taking part in more productions, and I feel it isn’t far that we’ll be introducing our songs,” Hyunsuk said.

Bang Yedam took part in not just the composing and songwriting of B-side track “Darari,” but also the vocal training of his bandmates for the song, pushing his potential further.

“I tried to pull out the merits of each member, and everything turned out how I wanted thanks to the members who followed my instructions well,” Yedam said, adding Doyoung was the member who showed particular improvement during the recording.

An album jam-packed with the colors and merits of the twelve members, Jihoon gave “The Second Step: Chapter One” a score of 98 out of 100.

“I took out the two as we need to improve and grow in the future. Treasure will continue to advance towards the full mark,” Jihoon said.

Formed through the YG audition TV show “YG Treasure Box,” which aired in 2018-2019, the band debuted in August 2020 with “The First Step: Chapter One,” fronted by lead track “Boy.”

Dropping three singles and a studio album since then, the boys state they have become more mature both mentally and physically since.

“If we had shown a boy-like freshness before, we’re more mature in this album. I felt that our voices have also become different and more mature as I monitored our recordings. I think we’re growing up in line with the evolutions in our concepts,” Hyunsuk said.

Treasure’s mega-scale comeback has garnered an explosive attention from the global fans, with the album’s pre-order sales racking up 600,000 units in just eight days, setting a new record for the rookies.

“We were surprised because we’re returning after a long time. We realized that many people have been awaiting our comeback. The number isn’t just the album sales, but it reflects the expectations for and trust in Treasure, and we’ve worked hard to live up to it,” Jihoon said.

The members hope to grab their first win on a local TV music show with “Jikjin.”

“We’ve imagined winning first place before, and the leaders have even prepared their speech, but we stopped at the second spot that day. We’ll work hard to make this dream come true,” Yedam said, while Yoshi piped in, “We want to share the joy of winning with Treasure Makers!”

The boys said they’re also busy preparing for their first ever concert set for April 9-10 at Olympic Hall in southern Seoul.

“Our days are full of happy contemplations about the concert. All the members are taking part actively and we’re trying hard to make the best plan. We’ve prepared performances of not just ‘Jikjin’ but the B-side tracks as well,” Hyunsuk said.

Debuting in the pandemic era, the boys performed live in front of fans only once last year during YG’s Private Stage and hope for more opportunities this year.

“The highlight of 2021 was our meeting with fans during the Private Stage. I’m looking forward to feeling that sensation again in April,” Mashiho said, while Asahi added, “We hope to hold a world tour this year and meet fans around the world.”