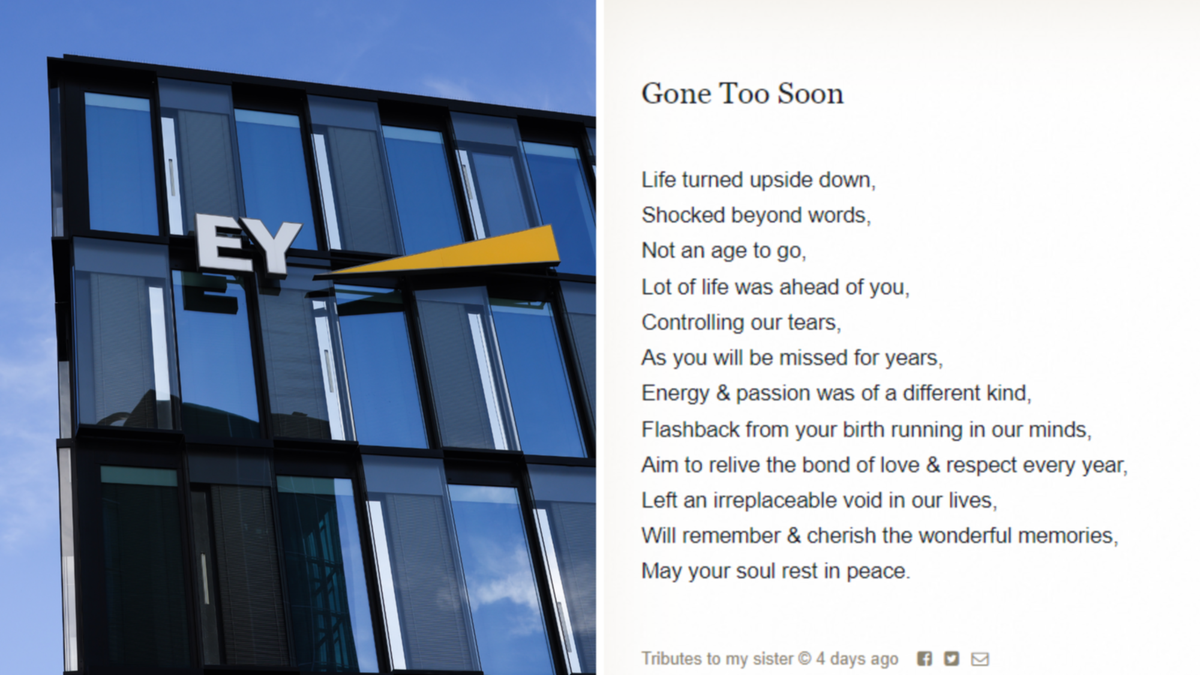 A mourning family member of the Ernst & Young employee found dead in her Sydney office has shared a touching tribute to the woman whose death has left an “irreplaceable void” in loved ones’ lives.

The 33-year-old’s body was found at the accounting giant’s head office about 12.20am Saturday after she left work drinks at the nearby Ivy Bar.

A man believed to be a close family member of the woman has penned a moving message of how “life turned upside down” when she died.

He shared a poem titled Gone Too Soon, seen by 7NEWS.com.au, with the caption “tributes to my sister” in the days after her death.

“Shocked beyond words, not an age to go, life was ahead of you,” he wrote.

The man said her loved ones were “controlling our tears, as you will be missed for years” and reflected on her “energy and passion” that was “of a different kind”.

“Flashback from your birth running in our minds, aim to relive the bond of love (and) respect every year,” he wrote.

The woman’s role and name has not been disclosed at this stage, but it has been revealed her husband was travelling from Singapore to Sydney at the time of her death.

He was informed of the tragedy upon arrival in Australia, The Australian reports.

Ernst & Young CEO David Larocca said support has been offered to her husband, and said an internal review “encompassing health and safety, security, social event” would be launched in response to the tragedy.

“We are deeply shocked and saddened,” he told 7NEWS.com.au earlier.

“Our chief mental health officer will be part of an ongoing review and has been instrumental over the weekend in providing ongoing advice and guidance.”

It is believed the 33-year-old returned to her workplace twice after leaving the work event and was in the George Street building for just 20 minutes before her death.

The company confirmed the woman left the office about 7.30pm and returned after midnight.

Police told 7NEWS.com.au officers responded to a concern for welfare report and the circumstances were not being treated as suspicious.

Police have determined the time her security card was used to access a secure patio on the building’s upper level, The Australian reports, adding the cause of death was likely the result of self-harm.

The newspaper says the role alcohol played in the woman’s death is being investigated, despite police noting security footage did not show her exhibiting obvious signs of intoxication.

A report is being prepared for the coroner.

For further information about depression contact beyondblue on 1300224636 or talk to your GP, local health professional or someone you trust.