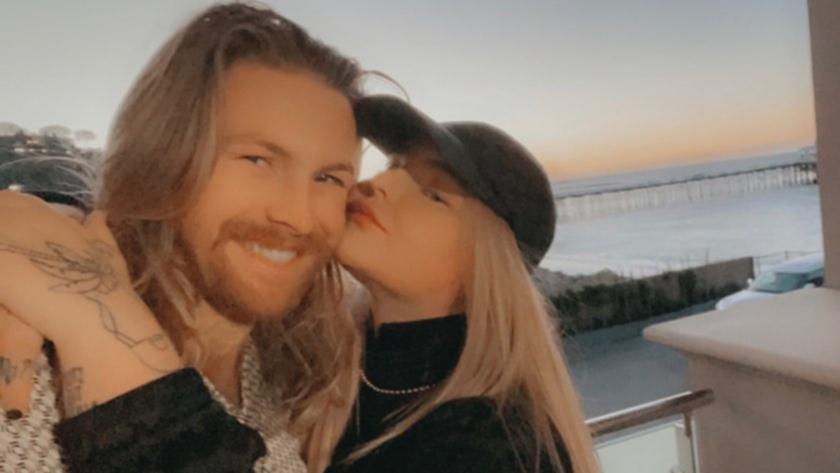 Singer Tones and I shared the sweet way her fiancé Jimmy Beyford got down on one knee, while in a recording studio.

The Aussie hitmaker recalled Jimmy proposing via a “Will you marry me?” tattoo on his right knee cap.

WATCH IN THE VIDEO ABOVE: Tones and I talks writing music in lockdown

Speaking on the Kyle and Jackie O Show, Tones and I – otherwise known as Toni Watson – told the hosts of her proposal following a trip to the pub.

“I got back from the pub … and [Jimmy] was like, ‘Oh come down to the studio I want to show you something,’” she began.

“I thought he’s just like farted into the mic and put reverb on it or something.

“So I press play and he’s like … ‘Hey … I love you’ and all that stuff we say to each other, and then I turned around … he was laughing because he was so nervous.

Pubs are clearly lucky for the couple, who first met at a pub just before the pandemic broke out in 2020, when Jimmy complimented Tones’ beanie.

“I met him at a pub in Frankston, and I didn’t really remember him… he just came up to me and said ‘I like your beanie,’ and that’s it,” she said.

When announcing her engagement, the Melbourne-born pop star kept the caption simple, just writing a ring emoji and tagging her fiancé Jimmy, who she had been dating for two years.

Jimmy, meanwhile captioned the same photo: “2021 was a tough year for everyone but I ended mine with a yes, can’t wait for my best friend to be my wife”.

Jimmy – known to his friends as “Bedders” – is a former bricklayer and player for the Victorian AFL team, the Frankston Bombers, who now is a stage technician for his new fiancé.

Both announcement posts were soon filled with comments from fans and famous friends: “Omg!!!!!!! AHHHHHHH CONGRATS!!! To nothing but amazingness for everything to come!!” Selling Sunset star Chrishell Stause wrote.