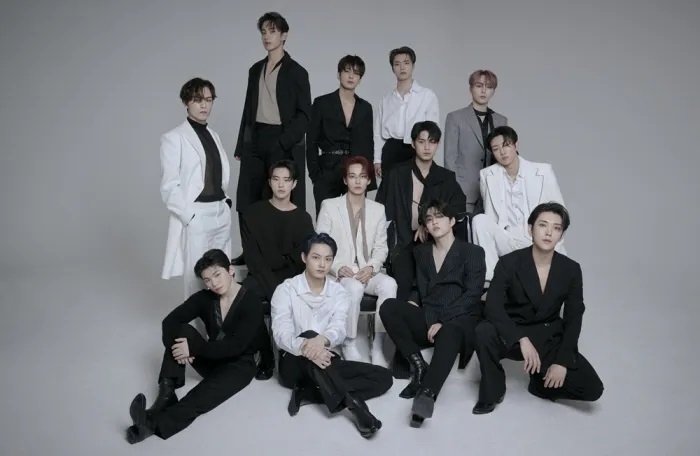 Seventeen will come out with its fourth studio album in May, local news reports said Thursday.

The 13-piece act debuted in 2015 and has been releasing a score of hits ever since. Its previous LP “An Ode” came out in September 2019 and sold over 700,000 copies in the first week, the best sales in the second half of the year. Its ninth EP “Attacca” ranked No. 13 on Billboard 200 last year.

In the meantime, the band will host its sixth fan meet event, titled Seventeen in Carat Land, for three days in Seoul from March 25. Carat is the name of the band’s official fandom community. A film, dubbed “Seventeen Power of Love: The Movie,” will be unveiled in April.

Twice rose to the top of Oricon’s daily album chart with its fourth compilation album “#Twice4” that was released Wednesday.

The album consists of its hit songs such as “I Can’t Stop Me,” “Cry For Me,” “Alcohol-Free” and “Scientist” in both Japanese and Korean. Prior to the release of the album, the band uploaded the music video for the Japanese version of “Scientist” on its YouTube channel.

The nine-member act celebrates its fifth anniversary of debut this year and the album was the first step. It will be followed by a DVD, due out in May, and the fourth studio album in Japanese, slated for July.

The best news for Japanese fans, though, could be its concert at Tokyo Dome. It is part of Twice’s fourth international tour that recently brought the band to the US and from April 23-25 it will perform live at Tokyo Dome. It has been about two years since its previous concert in Japan.

Stray Kids’ upcoming EP will be another million-seller

Its second full-length album “Noeasy” from last year was a million-seller, a first not only for the band but also for the label.

The EP will consist of seven tracks including main track “Maniac” and all bandmates put their names on the credit for the songwriting. It will be fully unveiled on Friday.

On April 30 and May 1, the eight-piece act will host concerts in Seoul. In June through to July, it will tour Japan and the US, performing 15 times in 10 cities.

Meanwhile, JYP Entertainment announced this week that it has established a branch in the US. It will serve as a base to better target North American market for its artists, including Twice, Stray Kids and Itzy, said the firm.

Mark, Haechan and Doyoung of NCT will put out a song together as a part of the band’s singles archive project, NCT Lab.

The three, as subunit NCT U, sang “coNEXTion (Age of Light)” that will be released on March 20. The title urges everyone to step towards the future and also that everyone is connected. It will be the theme song for an experience zone, Age of Light, that will be set up in central Seoul.

Separately, subunit NCT Dream that includes Mark and Haechan will make a comeback with its second LP “Glitch Mode” on March 28. NCT is releasing new episodes of its original entertainment show “The NCT Show in The NCT Universe” until March 20 on its YouTube channel.