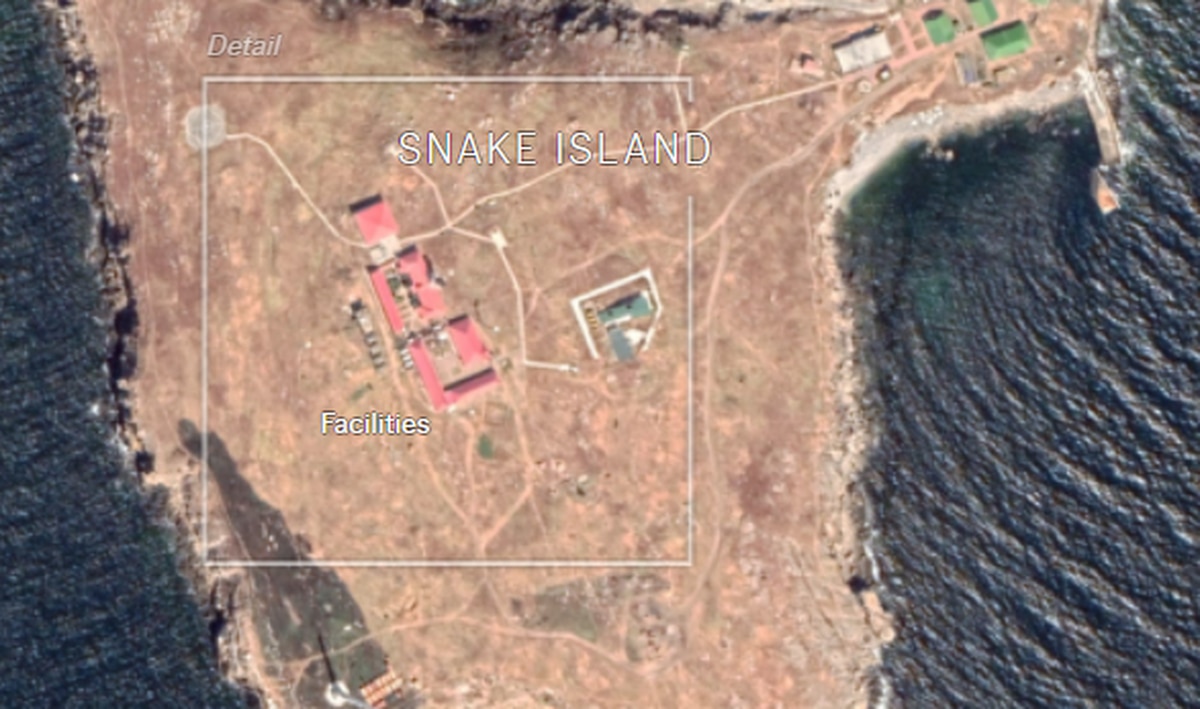 May 13 | The battle for Snake Island

The all-out attack that Russian troops deployed at the beginning of the offensive in Ukraine did not leave out maritime control of the Black Sea: the Kremlin’s naval force soon took up positions the island of Zmiinyi, also known as Snake Island and located around 140 kilometers (87 miles) south of Odessa and 40km (25 miles) from the Romanian coast. The first map of the conflict published by the Institute for the Study of War (ISW) on February 25 showed it under Russian control even then. In a statement in February, the Ukrainian Navy said that the invaders had destroyed infrastructure on this island of one square kilometer. A comparison of satellite images captured before the invasion and in recent days shows that the destruction of the main building occurred between May 6 and 7.

The strategic importance of the islet, which grants control over maritime traffic in the port of Odes, is enough to justify the ongoing struggle for it. The Russian Defense Ministry has claimed that it destroyed several planes, helicopters, drones and a landing craft in the early hours of Sunday morning during a Ukrainian attempt to recapture the island. Ukraine claimed that it only attacked Russian troops deployed there. British intelligence stated that Ukraine has used drones to destroy Russian anti-aircraft defenses and supply ships, stranded after the invaders retreated to the Crimean coast following the sinking of the Moskva, the flagship of Russia’s Black Sea fleet.

Helicopter destroyed on Snake Island, in a video shared by the Ukrainian army on Sunday.Reuters

The sensors of the European Space Agency’s Sentinel-2 satellites have made it possible to observe hot spots on the island which, in the context of war, can be associated with attacks. These indications of attacks have been recurrent since last February, and particularly intense during the last weekend, coinciding with a video of an attack on the island.

The proximity of Zmiinyi to NATO coasts has not prevented it from becoming a battlefield in the conflict. Armand Gosu, a professor of Russian Political History at the University of Bucharest, explained to Efe news agency that Moscow categorically dominates the Black Sea: “There is a huge military imbalance. Its ships patrol international waters without restriction, which has allowed the Russians to block a maritime outlet from Odessa,” he said. This blockade stifles Ukrainian sea exports that are essential to defend the coastal town from a hypothetical Russian siege like the one suffered by Mariupol.

March 8 A heat source can be seen in the northeast of the island, probably as a result of an attack, as well as a plume of smoke. The area inside the box contains most of the facilities.

March 23 Two weeks later, the Sentinel 2 satellite captured a new hot spot in a nearby area.

May 7 Once again a heat source can be seen, coinciding with a great column of smoke detected by satellites and shown earlier.

May 9 The last available image shows no hot spots, but the island’s vegetation has been largely burnt down as a result of the confrontation.

In the two and a half months since the start of the Ukraine invasion, the Russian offensive has changed strategies: at first it sought to take control of the major cities, then focused its efforts on the separatist region of Donbas and on securing the borders. Since then, the frontline has moved in line with modest but systematic Russian advances that have only met with resistance at a spot that’s been highly militarized since 2014, when Russia annexed the Crimea peninsula. The change in the frontline can be seen in the following maps, which show the situation on the ground every two weeks since Russia changed its strategy on March 25. The red color shows areas under Russian control, which have been expanding for the last month and a half.

Donbas is an area covering around 52,000 square kilometers, roughly the size of Costa Rica. It is divided into two oblast (administrative units) – Donetsk and Luhansk. Along the northwest, it borders the Kharkiv region, home to the city of Izyum, which is the starting point for Russia’s attempt to encircle Ukrainian defenders holding the frontline. From there, Russian troops have been trying to advance towards Sloviansk and Kramatorsk, the military headquarters and de facto capital of Donetsk, although they have had limited success.

When the Kremlin’s troops announced that their target was eastern Ukraine, they were already controlling much of Donetsk, Luhansk and the area extending to Kharkiv.

Two weeks later, the situation on the front had barely changed after a reorganization of the invading troops except in the area of Izyum, the new Russian center of operations.

The siege of Mariupol, which made Ukrainian defenders retreat to an industrial site, allowed Russia to free up troops to cement control over the northern end of the city.

Despite Ukrainian counterattacks that are gaining back territory near Kharkiv, the areas under Russian control increasingly encircle the Donbas border

The Institute for the Study of War (ISW) believes that the Kremlin’s forces near Izyum are regrouping and resupplying before resuming offensive operations in the southeast and southwest.

In the south of the country, near Crimea and the Black Sea, there is a similar situation: slow but constant Russian advances and reinforced positions in places like Kherson, which was swiftly captured in the early days of the invasion. Ukrainian counterattacks have barely made a dent on Russian forces, who have increased the territory under their control week after week. Moscow has been concentrating anti-aircraft and missile systems in the northern area of Crimea, said the ISW. This could be a prelude to resume offensive operations towards Zaporizhzhia and Kryvyi Rih, in central Ukraine.