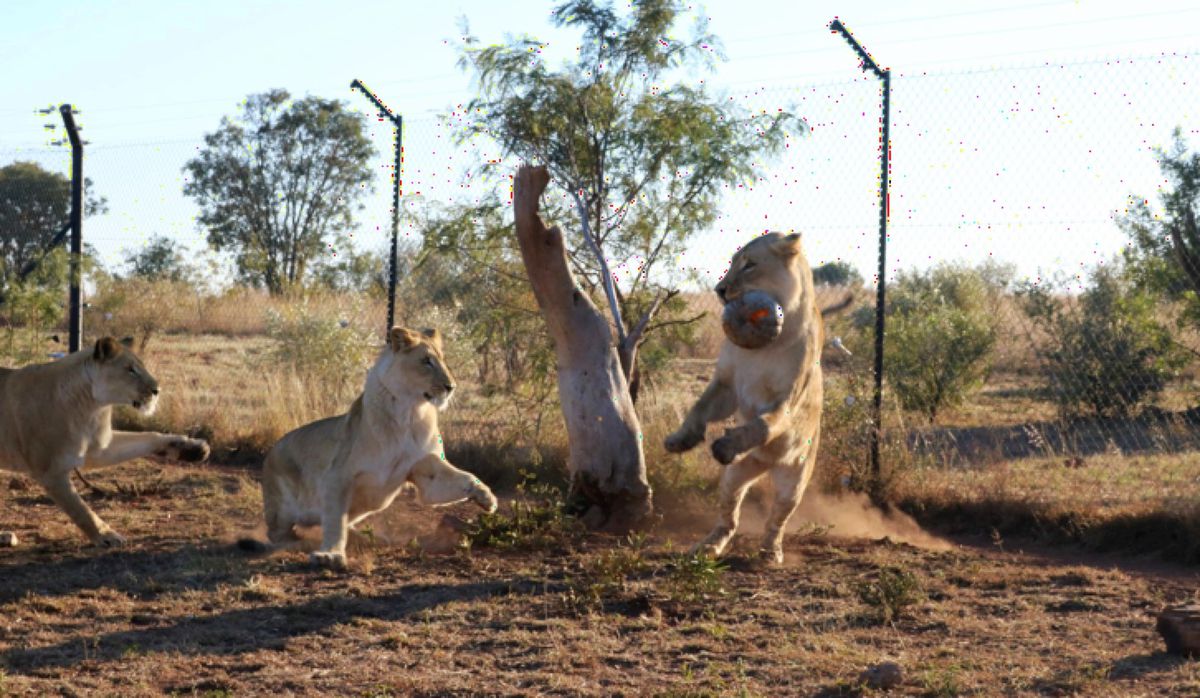 Lions are (erroneously) famous for being the kings of the jungle, but they can be made to be as docile as a domestic cat after inhaling oxytocin. The so-called love hormone induces the lions to greater proximity, while they play with a toy and lower their guard against noises from strangers. However, a recent study shows that at mealtimes, oxytocin does not lower the level of violence among the big cats, but in fact increases it, a reminder that this neurotransmitter also possesses a darker side.

Oxytocin is a hormone synthesized by the hypothalamus, the same area of the brain that regulates, among other thing, body temperature, sexual conduct and heartbeat. Once released from the nerve endings, it acts upon several areas and circuits in the brain, which regulate the so-called social emotions. It is the endogenous anxiolytic par excellence, lowering stress levels and increasing empathy, confidence and cooperation. In mothers, it forms the basis of the intrinsic “I would kill for my child” instinct. In fathers, it induces fidelity when they have small children and, in general, it raises the intensity of affection between human couples. In the animal world, research has been carried out into how it affects animal conduct under laboratory conditions and its role in social relations among apes. It is the reason for the love between dogs and humans and it has even been studied in octopi. But until now the question had not been addressed: what effect does oxytocin have on the largest predators? Can the genetic aggressiveness and ferocity of lions, for example, be tamed?

In the summers of 2018 and 2019, biologists and neuroscientists from the University of Minnesota visited the Kevin Richardson Foundation in Dinokeng, South Africa. They wanted to see how oxytocin moderated the behavior of lions. At the wildlife sanctuary there are dozens of carnivores living in a state of almost total freedom. They were all either born in captivity or rescued as cubs, which makes fully reintroducing them into the wild difficult. Across various sessions, the scientists administered oxytocin nasally to 20 of these felines before they were due to eat.

You can see their features soften immediately: they go from wrinkled and aggressive to a completely calm demeanor. They are totally relaxed

Jessica Burkhart, biologist and co-author of the study

The results, published in scientific journal iScience, showed that oxytocin caused significant changes in the behavior of the lions. The authors of the study looked at various facets: physical proximity, group play, management of food and level of alert against potential threats. They observed that physical distance between the animals was reduced, on average, from seven meters before oxytocin was administered (and in the groups given a placebo) to three-and-a-half meters. Social tolerance among the pride was confirmed by throwing them a doll, which they played with like a toy. The head rubs so typical among felines and the amount of purring increased significantly.

Once cooperation and affection within the group had been determined, the researchers wanted to see how they reacted to external threats. To do so, they played the roars of lions that were unfamiliar to all of the study groups. A roar is almost always a warning sign, alerting lions from outside the pride that they have strayed into hostile territory. After being given oxytocin the felines, and in particular the males, lowered their state of vigilance. Thus, the researchers found that the lions maintained their closeness to group members but also stopped roaring in response to potential strangers. Among those who were not given the hormone, half roared warnings in response to the potential threats.

Biologist Jessica Burkhart, the lead author of the study, expressed her surprise in a university release: “You can see their features soften immediately: they go from wrinkled and aggressive to a completely calm demeanor. They are totally relaxed.” The effects of the exogenous oxytocin only last for about half an hour, but the scientists are confident that its administration will trigger behavioral changes that are more or less permanent.

“Currently we are working on introducing animals that have been rescued from circuses, from overseas or from war zones and that are now living in sanctuaries,” says Burkhart, who hopes that oxytocin will prove to be effective in “the reintroduction of animals into the wild, by helping them to be more inclined toward their new social environment, making them more curious and less shy, which would lead to more successful social bonding.”

In one aspect, though, oxytocin is not precisely the love hormone. When the time comes to eat, the lions are fed sequentially, one-by-one. It is the most fraught time of day with or without the intervention of the neurotransmitter. Among the groups of animals, made up of between two and six lions, roars and fights were always common as they vied for the piece of meat or frozen blood on offer. Before the experiment, 20% of the animals were aggressive toward the other members of their group. After oxytocin was administered, that number rose to 25%.

This feeding-time behavior illustrates a key that the authors highlighted in their conclusions: the impact of oxytocin on the animals’ behavior is very dependent on context. Sometimes, the love hormone turns into the war hormone or, perhaps it is more accurate to say, both at the same time. Studies in chimpanzees have linked the high presence of oxytocin in urine to situations of conflict. A 2017 investigation related these high levels with a parallel phenomenon: at the same time as oxytocin triggers empathy among members of one group, it exacerbates aggressiveness toward other groups who do not form part of the family. Burkhart and her colleagues acknowledge that one of the limitations of their study is that they did not attempt to put lions from different groups together to see if the neurotransmitter modified their behavior.

In humans, the two faces of oxytocin have been studied using game theory and other experiments. A revision of what science knows about the social functions of this hormone, published in 2016, confirmed that among members of the same group it resulted in greater empathy, conformity with the norms of the group, confidence among its members and internal cooperation. But toward other groups, everything is opposite. When dealing with people outside the group, oxytocin triggers stress, a state of vigilance and defensively aggressive answers. The key seems to be that the presence of the neurotransmitter in all mammals can activate two different cerebral circuits depending on context. The lead author of that paper was Leiden University researcher Carsten de Dreu. In an email, Dreu notes: “The revision shows that it is certainly not simply the love hormone.”

Teresa Romero has been studying the role of oxytocin in wild and domestic animals, and humans, for over a decade: “From an evolutionary point of view, it is very conservative and it is present in all mammals, but it does not act in the same way in all species,” she says. In rodents, for example, it plays an important role in social memory, in recognizing other rodents, which is not as relevant among primates. Romero agrees with the authors of the study and Dreu that the valence of the effect depends on the context. “In people and in many animals, it promotes both social interactions and the distinction between us and them.”

Burkhart and her team are now investigating whether the effect of oxytocin on lions is transient or long-lasting: if it is the latter, it will open up many possibilities. Romero notes that in studies with mice and dogs, the administration of oxytocin “increases positive interaction and this feeds back into endogenous production.” This theory of reinforcement is being investigated as a possible treatment for people with autism spectrum disorders, in the hope that the neurotransmitter will induce greater interaction with other people. But, as Romero says, “so far there have been no positive results.