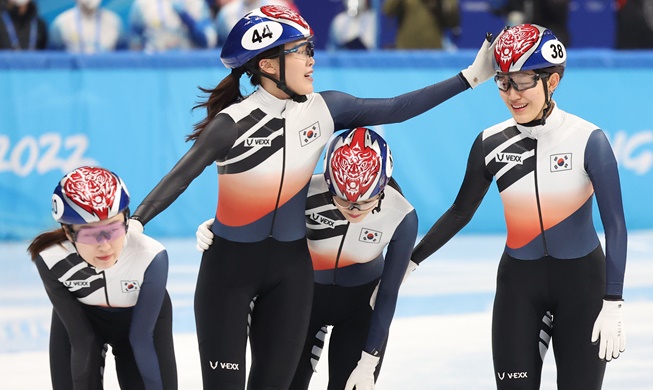 Members of the women’s national short-track team on Feb. 13 celebrate after winning the silver medal in the 3,000-m short-track relay at the 2022 Beijing Winter Olympics in the Chinese capital’s Capital Indoor Stadium. (Yonhap News)

The national women’s short-track team has won the silver medal at the 2022 Beijing Winter Olympics in the 3,000-m relay.

The Korean women thus earned their third consecutive medal in the event after winning the gold both in the 2014 Sochi Winter Olympics and the 2018 PyeongChang Games.

The silver is Team Korea’s fifth medal at this year’s Games.

President Moon Jae-in in a congratulatory telegram called the medal a “splendid achievement” accomplished in the relay for three straight Olympics after the Sochi and PyeongChang Games. He hailed it as “the best game” and added that he was proud of the Korean athletes “for combining their skills and hearts to deliver the gift of great joy.”