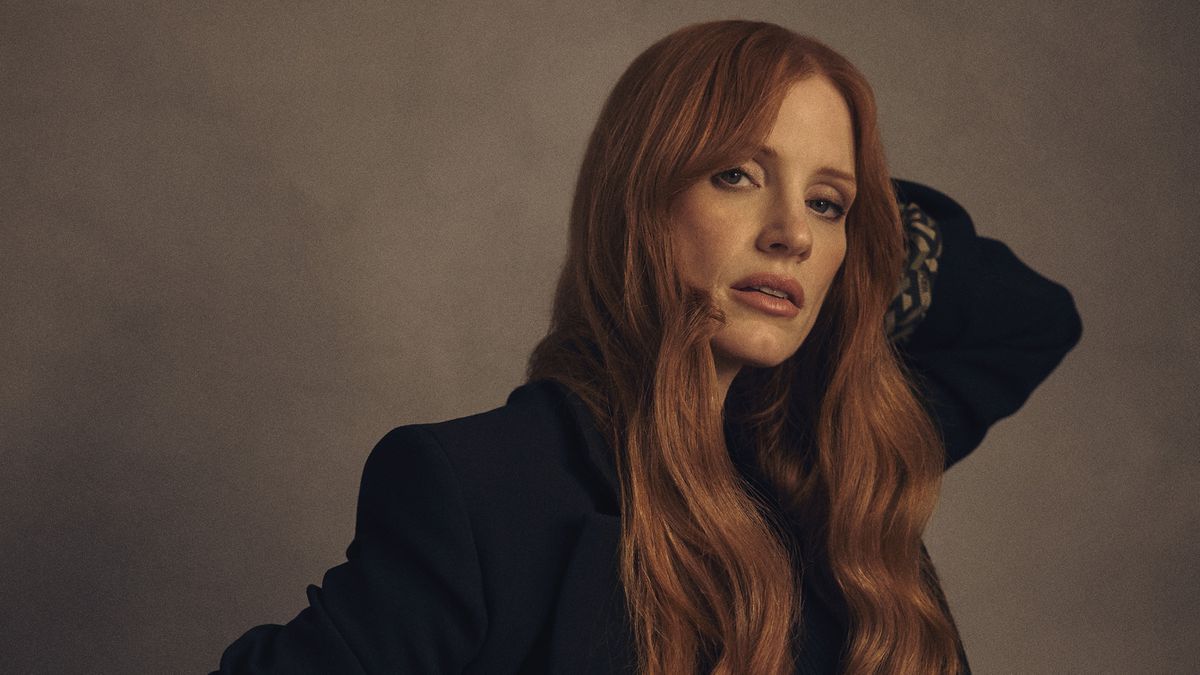 Jessica Chastain is celebrating a decade in cinema. “Can you believe it?” she asks from a hotel room in María Cristina Hotel in San Sebastián in Spain’s Basque Country. “Do I get a cake? Because this is a celebration…,” she says pointing to her green detox juice and the two identical glasses on the table (the second one has just been brought in without a word about what was wrong with the first). Among other things, Chastain has spent the decade trying to get a movie made about televangelist Tammy Faye Bakker.

During the 1980s, Bakker and her husband Jim built a Christian-Evangelical empire – one that included a television channel and a theme park. When she was arrested for fraud and conspiracy, the media turned her into a national joke for her excessive naivety, enthusiasm and makeup. In The Eyes of Tammy Faye, Jessica Chastain retells her story – a role that has landed her an Oscar nomination for Best Actress. Chastain also produced the movie. But this is not the first film this year in which the 44-year-old has acted and produced, she also wore both hats on The 355, a movie about a group of international super spies, which also stars Penélope Cruz, Lupita Nyong’o, Diane Kruger and Fan Bingbing. This year, Chastain is taking center stage.

The world first discovered Chastain at the premiere of The Tree of Life (2011) at the Cannes Film Festival, when she walked the red carpet with Brad Pitt on one side and Sean Penn on the other, evoking classic Hollywood glamor. In reality, she gripped on to them because she was worried her legs would give way. “I didn’t feel anxiety about connecting to other artists and getting to work with people I really admire, I more felt anxiety about the media,” she explains. “This is the first time I’m realizing this as I’m talking. In the same way that the media devoured Tammy, there’s a sense of devouring women, treating them as commodities.”

People were so upset that my character didn’t have a love story in Zero Dark Thirty. Journalists and critics would ask me about things like that

In 2011, another five films were released that starred Chastain. In the space of one year, the actress – who gets embarrassed when people sing Happy Birthday to her in public – found herself presenting a film in Berlin, another in Toronto, two in Cannes and another two in Venice. Movies such as Take Shelter, The Help and The Debt showcased her versatility and she began to be lauded as the “best actress of her generation,” or as in the words of Al Pacino – who picked her for the docudrama Salomé – “the next Meryl Streep.” But Chastain felt that it was just a matter of time before she disappointed everyone. “I’m the unknown everyone’s already sick of,” she said at the time.

When she won a Golden Globe for her role in Zero Dark Thirty, Chastain said in her acceptance speech that she had worked very hard to get where she was. The magazine Variety later published an anonymous statement from a Hollywood public relations agency that warned that these kinds of statements do not tend to go down well. Meanwhile, everyone was talking about the new rising star, Jennifer Lawrence, who was admired by all. This is when the rumors began that the two actresses couldn’t stand one another. But instead of ignoring the rumors, Chastain dismissed them in a message on Facebook – a move that was not common back in 2013. Since then, she hasn’t stopped speaking out.

“People were so upset that my character didn’t have a love story in Zero Dark Thirty. Journalists and critics would ask me about things like that,” she says. “I constantly said ‘I am playing a woman who isn’t defined by the relationship in her life, she’s defined by her work.’ And it’s a very shocking thing for society to acknowledge because it’s a reality – but it’s not the media’s reality of what a woman is. So that’s when I started speaking up about it.” Without looking at the face of her publicist, she adds: “I absolutely have people in the industry who are dear friends, who I know care about me and love me, tell me to stop talking. It’s like ‘be careful’ of saying too much, because they wanted to make sure that I would have a long career.”

Chastain’s background is in theater. At 21 years of age, she won a scholarship to The Juilliard School, the most prestigious performing arts school in the United States, which allowed her to become the first member of her family to receive a university education. She learned how to play complex female characters, but when she arrived in Hollywood, she realized that the film industry had little to offer her. Not even after two consecutive Oscar nominations. So in 2016, she founded production company Freckle Films. “I wanted to use my career and my work as political filmmaking in terms of how we as a society view gender, race, class, sexual identity and sexual preference.”

But Hollywood has changed over the past decade, and Chastain is now one of the most visible faces of this new shift. In 2017, she called out filmmaker Bryan Singer on Twitter, sharing an article that highlighted the sexual assault allegations against the director of X-Men-Dark Phoenix. When asked about actor Johnny Depp’s preference for working with an earpiece so as not to have to learn his lines, she said she preferred to be “professional” and learn the script. And she has also become a vocal advocate for equal pay, helping actress Octavia Spencer, her co-star in The Help, negotiate a salary five times her initial pay for a film together.

“There was that moment in Cannes… I was not planning on saying that. It went viral.” Chastain is referring to a press conference at the end of the 2017 festival, which she had participated in as a jury member. During the conference, she confessed that she found the representation of female characters in the official selection “disturbing.” Chastain argued that if there were more female directors, there would be more diversity in the female characters in films of the official selection. “After I said that, I went, ‘Oh did I just hurt a festival that has been so generous with me?’ The reality was very sweet. Thierry Fremàux [the director of the Cannes Film Festival] a year later in press said that he was so grateful that we had talked about women in the festival and that they had made changes because of that.” She herself has seen those changes: “I don’t think about something before I say it, I just say it.” Although she confesses: “There are times when I go, ‘Oh gosh, now it’s going to become a huge thing’.”

Another challenge has been balancing the roles of actor and producer. She explains: “The producer wants to get the movie made, the actor wants more time.” This conflict can cause tension, especially when it comes to a character that requires as much preparation as Tammy Faye Bakker, someone who can easily fall into caricature. “I had to just completely embarrass myself in this part, which is not a fun thing to do,” she explains. “I thought for my whole life, they could go, ‘Oh God Jessica’s Tammy was crazy.’ That could be the joke that follows me for my whole career. And I had to be okay with that.”

But The Eyes of Tammy Faye does not descend into caricature because it treats the character with tenderness. That’s not to say it ignores her eccentricity, but instead of parodying her as the media did, the movie portrays her as a woman who triumphed in a man’s industry.

After the scandal of her divorce, Bakker became a hero of the gay community. She said that when everyone turned their back on her, it was the LGBTQ+ community who came to her aid. “And I will always love them for that.” A 2000 documentary about Bakker, titled The Eyes of Tammy Faye, was narrated by drag queen RuPaul, and serves as the basis for Chastain’s movie.

“Tammy was fabulously camp, but you also don’t want to do something that’s just that. She would have fun and make people laugh, but I always saw loneliness in everything she did. Even when she was being funny. To me, she was so innately lonely. And that’s why I think she desperately wanted to love people, people who felt different, on the outside, because she felt on the outside.”

As a producer, Chastain believes that the best strategy is to alternate “grown-up” movies such as The Eyes of Tammy Faye with more commercial fare such as The 355. The idea for the latter project came about at the 2017 Cannes festival. She explains how she felt “a certain… sadness” at the sight of so many film posters with male casts, which were seeking financing. She asked her agent: “Why are they all men?” Her agent replied: “I think you will have to find a way to do it yourself.” The end result is a movie produced via a kind of cooperative: the five female stars will be the owners of the movie and will split the profits. A number of Hollywood studios tried to buy it, but they turned them down. “They already had the chance to make this film,” she states.