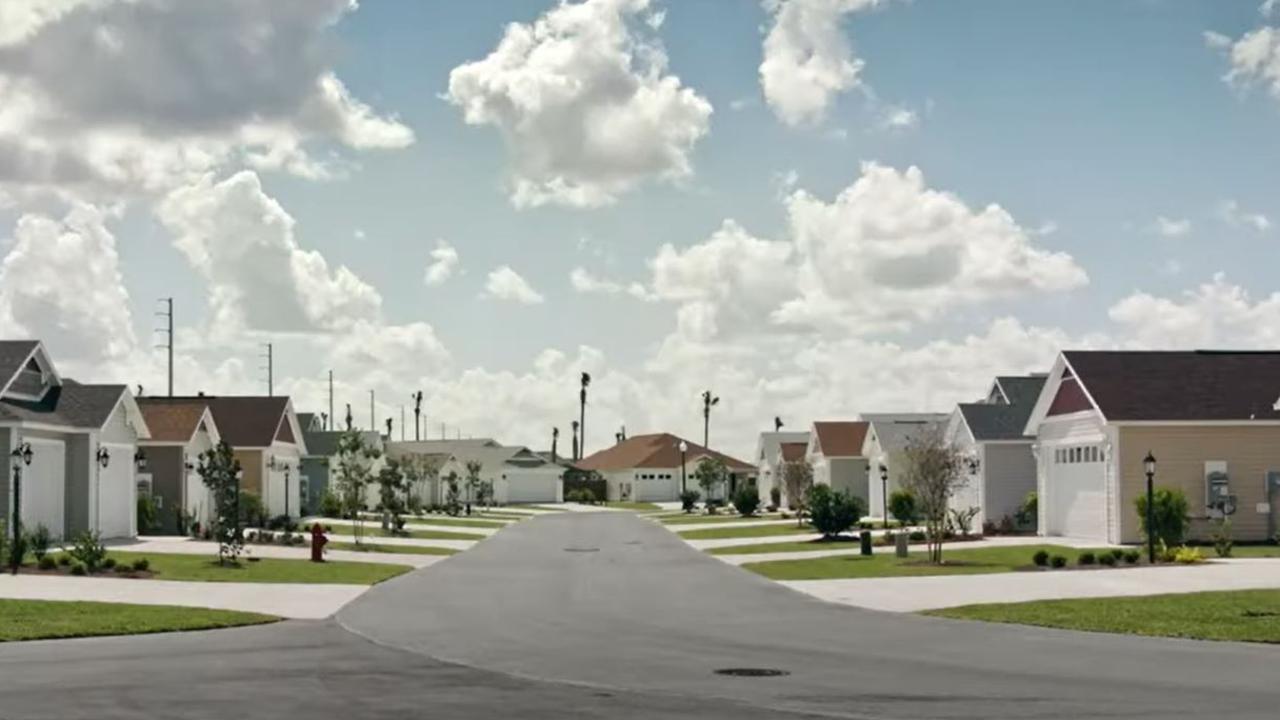 To its residents the suburb they call home is perfection and a place to spend happy, carefree days. But there are cracks forming and critics say it’s almost “sinister”.

For the residents, it’s one of the most successful experiments ever undertaken in creating a community from scratch.

Chirpy locals gather to drink beer and chew the fat on each other’s porches. Or they jump in their golf carts – everyone has a golf cart – and trundle to the own square overlooking the lake.

One golf cart is emblazoned with the motto “another day in paradise” which sums up the feelings of the majority of the 150,000 who live here.

But critics say there’s something not quite right about The Villages, a sprawling suburb an hour’s drive north of Orlando in Florida.

There’s a darker, maybe even “sinister” side to this town which now takes up more space than Manhattan.

It’s a town where cheery music is pumped 24/7 over loudspeakers but you’ll never hear an ambulance siren. Even the grass isn’t what it seems.

Many residents, known as “Villagers”, won’t hear a bad word against their home town. And the management certainly doesn’t encourage dwelling on the suburb’s downsides. But those outside the compound are far less enamoured by it.

“The Villages is a place that is so honed towards perfection that it cannot uphold that perfection, it’s just not possible,” Valerie Blankenbyl, who lived for a spell in the community, told news.com.au.

She likened The Villages to Jim Carrey film The Truman Show about a flawless but ultimately fake town.

The filmmaker has now produced a documentary about the world of The Villages called The Bubble which has its Australian premiere at this month’s Sydney Antenna documentary film festival.

A clue to The Villages’ uniqueness, and why so many of its residents adore it, can be found in its facilities. It boasts 54 golf courses, 70 pools and 3000 social clubs — but just a single children’s playground.

That’s because kids are thin on the ground. The Villages’ is promoted as an “active retirement community”. You can’t live there unless you’re over 55.

It’s been hugely successful. The Schwartz family that developed the land are now billionaires. A statue to “founding father” Harold Schwartz stands in the middle of the town.

Days for its residents are crammed with exhausting rounds of golf, cardio drumming, belly dancing and cheerleading lessons, even synchronised golf cart displays. And day drinking – lots and lots of day drinking.

“Happy whatever day this is,” says one of the residents to his wife in the documentary as he sinks another cocktail on the veranda.

Ms Blankenbyl said the film came about when she was thinking about her own parents’ impending retirement.

“It’s a really challenging phase in life with a lot of changes. And society isn’t the friendliest to you either.”

Some Villagers remarked to Ms Blankenbyl that they forgot they were older until the left the suburb and re-entered the outside world.

Free from work and with the kids all grown up, residents revel in doing whatever the hell they want too. And if that involves getting dolled up, singing karaoke at noon and then flirting with a neighbour, then so be it.

“We should be able to feel sexy and beautiful at 84. Why not? Why is it such a shocker?” said Ms Blankenbyl.

“Good on them being so courageous.”

The residents were friendly, she said, which reflected the “playful” nature of The Villages.

“We know we’re in a bubble,” said one Villager interviewed for the film. “But it’s a nice bubble”.

Yet the shimmering bubble is also something of a mirage. It’s a make-believe version of the world. There are cracks beneath the surface.

Not quite such a paradise

The ambulances turn their sirens off and the funeral cars are unmarked because no one wants to be reminded of the inevitability of death.

Then there’s the grass.

“There are signs everywhere not to let your kids or pets on the grass because it’s treated with so many chemicals to make it that beautiful,” said Ms Blankenbyl.

Its chemicals that also keep the bugs – that usually love humid Florida – away too.

“From my perspective, not having insects isn’t an advantage. It’s really worrying,” said Ms Blankenbyl.

It’s more than just unusually green grass however. There is a concerted effort on behalf of The Villages’ management to keep the outside world, well, out.

It has its own radio station and newspaper which provide a constant infusion of positivity with never a word against the suburb itself.

The town has set up its own version of a council which one local journalist likened to a “shadow government”.

The company that runs The Villages were none too keen on Ms Blankenbyl and her film crew’s presence.

“We encountered management right from the very second we arrived.”

There were “constant confrontations,” she said, all designed to make them leave.

“Every time we were shooting somebody would come and try to stop us filming.”

One of the encounters makes it into the documentary.

But Ms Blankenbyl knew they had the law on their side. The Villages is on public land and they could film wherever they liked.

So, the management started talking to their interviewees, she claimed, to try and get them to stop talking to her. But the crew has built such a rapport with Villagers, the plan failed.

Local upset at The Villages

Ms Blankenbyl said they didn’t have to go far to see opposition to the development.

“It wasn’t something that you could escape because as soon as you drove outside the gates you see all these signs that say ‘Stop the Villages’.”

To some who lived beyond the manicured golf courses there was almost something “sinister” about The Villages, she said.

There was the perceived lack of accountability; the encroachment of the ever-expanding retirement suburb into surrounding established communities some of which have now vanished completely.

Then there was the insatiable desire for water in The Villages, to keep the green grass green and the pools filled, which it’s claimed is lowering the water table and leading to shortages and sink holes.

But most of all, it’s The Villages’ general desire to split itself off from its neighbours. The owners even went as far as to install boom gates on roads leading into The Villages to give the appearance of a gated community.

It’s not, anyone can enter, but it fooled many locals for years who thought they were barred.

“But there wasn’t nothing. There was a community there and it was where people used to gather and now it’s just all gone.”

Some of the Villagers were aware of the development’s controversy, she said. It didn’t sit comfortably with them.

But many either weren’t aware or didn’t trouble themselves with life outside the bubble.

Cheerful, positive, and loving where they lived, they preferred to focus on keeping healthy, socialising and looking their best.

‘Most ageist place on earth’

Oddly, said Ms Blankenbyl, this optimistic side to The Villages was one that a gerontologist – an academic that studies ageing – said was also one of the most troubling.

“She thought The Villages was the most ageist place there is in the world.

“Because even in a place that that’s full of older people, you aren’t allowed to be old or age. You still have to be fit and young and beautiful and healthy.

“And sickness, death and dying is not part of that,” said Ms Blankenbyl.

“It’s sort of like an extreme form of ageism that has manifested in a retirement community.”

It may not be as blatant as The Villages, but it could be just as much a bubble.

The Bubble will screen on Sunday, February 6 at the Palace Chauvel cinema and Saturday, February 12 at the Dendy Newtown cinemas as part of the Sydney Antenna film festival.