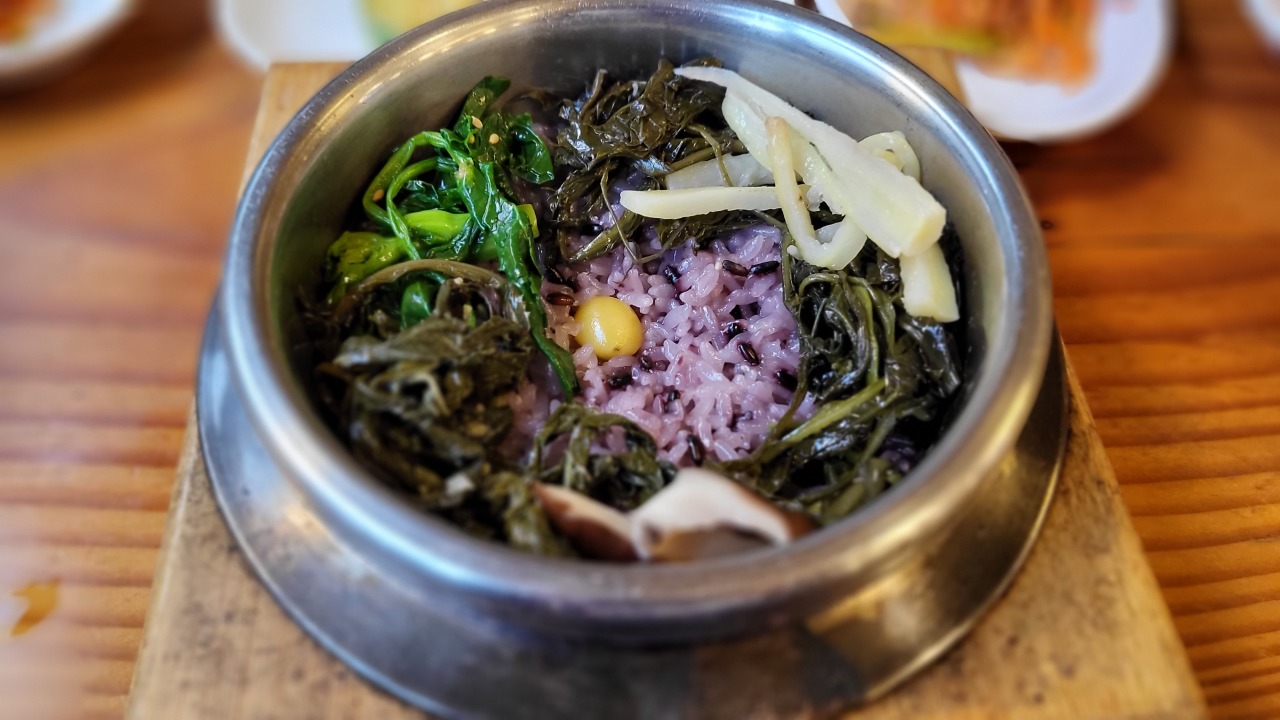 As the saying “The March winds are the morning yawn” goes, a fresh spring breeze not only awakens our souls, but imbues renewed energy in nature.

During this season, one of the side dishes almost always present on Korean dining tables is namul, or seasoned vegetables and herbs.

Although now available year round, many wild plants, herbs and vegetables are in their best condition during the spring season.

Most namul varieties are bathed in shades of green, but not all have to be of such color. Pumpkin squash, mushrooms, bean sprouts and different types of seaweed, for example, can also be counted as namul.

There are different categories of namul, such as bom namul, which literally means spring namul, and san namul, or wild vegetables foraged from the mountains. On the first full moon of the year, Koreans traditionally have boreum namul, referring to the full moon, which is eaten in hopes of staying healthy, especially through the coming summer.

Although it takes much effort and patience to prepare the vegetables and herbs, namul seasonings are kept simple.

After being blanched or steamed, it is typically seasoned with garlic, salt or soy sauce and sesame oil or perilla oil. A bit of fine red pepper powder, ground sesame seed or chopped spring onion can be sprinkled on top for a visually delightful finish.

The various greens possess unique scent and texture — some are sweet and some are bitter — and the seasoning is kept to the minimum to highlight each green’s inherent taste.

Namul is typically enjoyed with a bowl of rice and soup, which makes for a full, satisfying meal.

Below are three restaurants in Seoul where you can get a taste of spring.

Located in the posh neighborhood of Hannam-dong between wine shops, cafes and pizzerias, Parc, a modern namul restaurant, has been around for nine years.

Breaking the stereotypical image of Korean namul places, a large painting of Barcelona, Spain‘s Park Guell hangs at the entrance. Stamps, cups and souvenir posters collected from various countries are placed on top shelves, giving an exotic look to the restaurant of traditional Korean food.

A bowl of brown rice and doenjangguk is served with three different side dishes. While the namul can be eaten separately as a side dish, spicy gochujang is offered on the side so you can mix up the different namul and rice with a dollop of the spicy paste to make your own bibimbap.

“Believing that the freshest namul can be picked in spring, we intentionally opened our restaurant on April 1, 2013,” Pak Sung-woo, owner of the restaurant, told The Korea Herald.

“Our restaurant is characterized by a mixture of muguen (old) namul, geon (dried) namul and saeng (raw) namul. Depending on the season, cham namul, bangpung namul and deodeok can be substituted for different types of namul, which adds to the fun of visiting in different seasons,” Pak said. Additional namul dishes are served as side dishes only for the three months of spring.

Mentioning that he missed his mom’s homemade spring namul the most while on backpacking trips abroad, Pak said he hopes his meals resemble warm-hearted namul meals prepared at home.

The namul platter costs 15,000 won, and side dishes and rice can be reordered at no additional charge.

The place is named after Jeongseon in Gangwon Province, famous for gondre, or wild thistle sprouts, which typically grow in clean alpine regions above 700 meters in altitude.

Since its opening in 2000, the restaurant has received high reviews from foreigners visiting Korea, through word of mouth and via social media. It has become a go-to restaurant when in Insa-dong.

There is a sign on each table on how to enjoy gondrebap. First, drink a sip of the tea offered to warm your stomach. Then put a little bit of the chef’s own soy sauce, or gangdoenjang, on the gondrebap. After having some gondrebap this way, mix various namul varieties into the gondrebap and stir them with two or three spoonfuls of the ganjanggejang sauce.

Gondre Jeongsik is 20,000 won per person, and all side dishes, including namul can be refilled. Gondre-based makgeolli is also sold here.

The namul specialty restaurant located in Yangjae, southern Seoul, is named after the mountain Odaesan in Gangwon Province, while sanchae refers to namul from the mountains.

Compared to most namul restaurants where side dishes are served upon ordering, it takes about 15 minutes for the Sanchae Jeongsik to be served.

Around eight different types of namul are prepared, varying depending on the day, according to the restaurant manager.

Most namul restaurants offer a vegetable-based meal, with some optional seafood side dishes, but this place also offers beef bulgogi as part of the meal.

The namul dishes here are quite salty, but steamed tofu and different types of jeon, or Korean fried pancakes, can help lessen the saltiness when eaten together.

Black rice hot pot is served with a kettle of broth. Scoop more than one-third of the rice into a separate bowl then add the broth to the hot pot and close the lid to make nurungji, or scorched rice soup. Sanchae Jeongsik is priced at 22,000 won.

If you want to try even more namul varieties, head for Odaesan itself. At the entrance to the mountain, you will find numerous namul restaurants, offering up to 30 different types of namul.