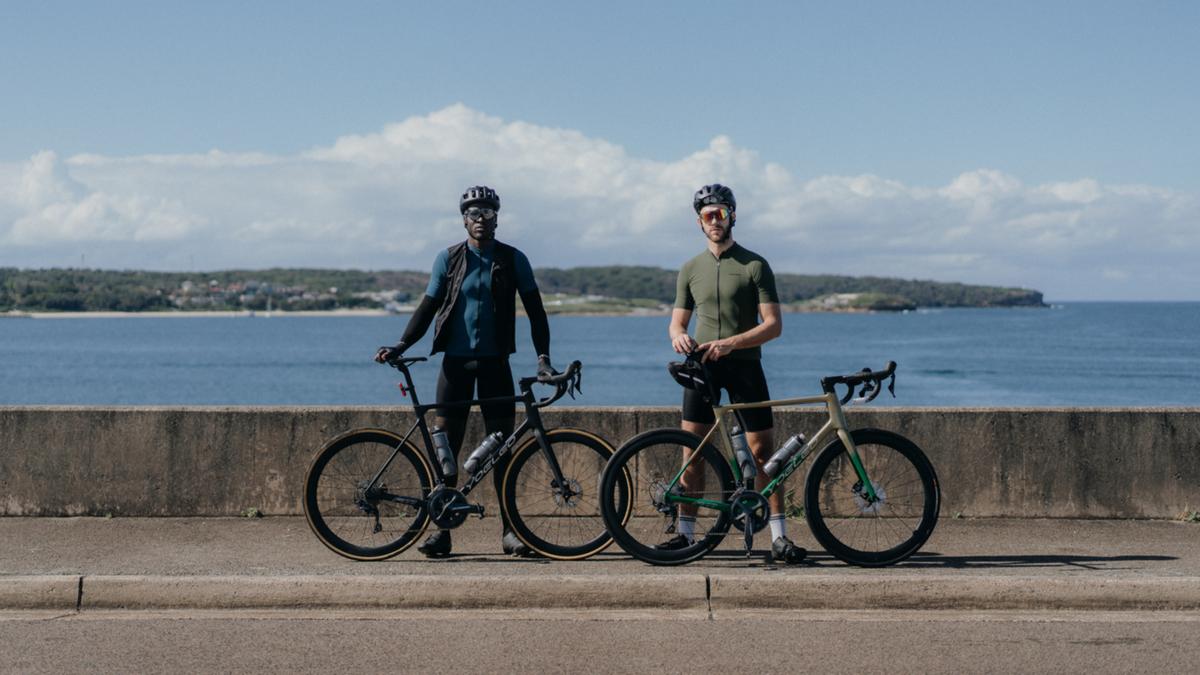 Ben Swift and Jermaine ‘Jay’ Jones are literally going to great lengths – an almost 15,000km two-wheel trek around Australia – to get you to talk about yourself.

The pair are banking on their biking mission to encourage you to tell your story, feel comfortable to share your struggles and connect with other people after the loss of close mates and their own mental health battles sparked them into action.

See Ben and Jay’s route in the video above

That’s the message the Sydney-based ex-pats want to spread ahead of taking on the epic 50-day, almost 15,000km bike ride around Australia they have dubbed the Boomerang Loop.

“The goal is to have people feel comfortable about opening up like I do now,” Jay told 7NEWS.com.au.

“It has taken the loss of friends to finally open up at 33 years old.”

The UK men only met after moving to Australia and, like many other expats, settled in Bondi about six or seven years ago.

Both men were keen fitness enthusiasts, but it was the culmination of Jay’s loss of three friends to suicide as well as losing his job during the pandemic and Ben’s decision to put the COVID lockdowns behind him and get on a bike for the first time since age 12 that led them to the massive pedal-powered challenge.

“I’ve not done anything in terms of endurance… I really like the idea of challenging yourself to a point of… seeing how far the body could push itself,” Ben, 30, said.

“I always wanted to do something and push myself to the limit,” Jay added.

“We’re tying the Boomerang Loop: the mental strength (of) what we have to do to cycle around Australia to the mental struggles that people go through every day.”

While the pair are cycling for a personal challenge, they hope the shock of the extraordinary ride will also open a conversation about mental health and raise $100,000 for Mindfull Australia -an organisation that helps empower young people and raise awareness about such issues.

“We are doing this as a challenge of a lifetime,” Ben said.

“It’s the shock factor for us as people who are not involved in cycling.

Jay and Ben chose Mindfull Australia “because they work with children”.

“That’s one of the things that we want to do – try and educate from a young age and have that ability to make people feel more comfortable at a young age, talking about their feelings,” Jay said.

The two men are also trying to change attitudes towards mental health, especially in men.

In Australia, nine people take their lives every day, according to Lifeline.

About 75 per cent of all suicides in the country are male.

Suicide is also the leading cause of death among Australians aged 15–24, the latest report from The Australian Institute of Health and Welfare shows.

“That sparked me to start talking about my own mental health and depression and anxiety that I’ve suffered for from as long as I can remember.

“That triggered the action of just trying to get more people to talk about it and feel more comfortable opening up.”

Ben and Jay, who are not professional cyclists, have been training for the last 18 months to get themselves ready to ride an average of 285km a day for the Boomerang Loop.

They don’t have a set training regime, but have spent every spare minute cycling.

“I think some people look at the 50 days as the challenge, but the actual real challenge is the 18 months before where we’ve been working 10 hours a day, coming home, eating, training, sleeping – that routine day after day,” Jay said.

While the ride will be an epic physical challenge, Ben and Jay agree it’s mind over matter.

“It’s less about the body, it’s more about your head. It’s such a mental feat,” Ben said.

“This is one of the big training aspects that we have to put ourselves through in order to be able to complete these 50 days.

“We have to go and train because what happens when we’re in the middle of the Northern Territory and we don’t want to go and get on the bike the very next day… you have to be mind over matter.”

The Boomerang Loop will involve the pair setting off on August 19, cycling a distance equivalent to travelling from Sydney to Canberra every day.

The pair will take off from Sydney and head north to Blueys Beach, north of Newcastle.

From there, they will continue up to Queensland, passing through Tweed Heads and Gympie before getting to Townsville on August 26.

They’ll then head to Darwin in the Northern Territory before crossing into Western Australia.

On September 19, Ben and Jay plan to have made it to Perth.

Eleven days later, they’ll be in Adelaide, having crossed the Nullarbor plain, and making their way back home.

On October 3, they’ll set off from Melbourne for the final leg of their ride.

On October 7, considering everything goes to plan, Ben and Jay will be back in Sydney, having cycled a total of 14,404km.

Along the way, they will have a support person to make sure everything goes smoothly.

But they’re also asking for people around the country to join them on the ride as they pass through major cities and regional centres.

“We’re looking for people to join our team as well whether that is a drivers, physiotherapists, whoever it is that may want to come and join us for a week, two weeks, three weeks, the whole journey.

“There may be people that want to be a part of this journey and help us out and help us get over the line and help us achieve the goal of $100,000.”

Ahead of the race, the duo are feeling a mix of emotions.

“There are days I’m really, really confident, days where I have a self doubt, but overall I’m really excited like Ben to get on the road.

If you need help in a crisis, call Lifeline on 13 11 14. For further information about depression contact beyondblue on 1300224636 or talk to your GP, local health professional or someone you trust.