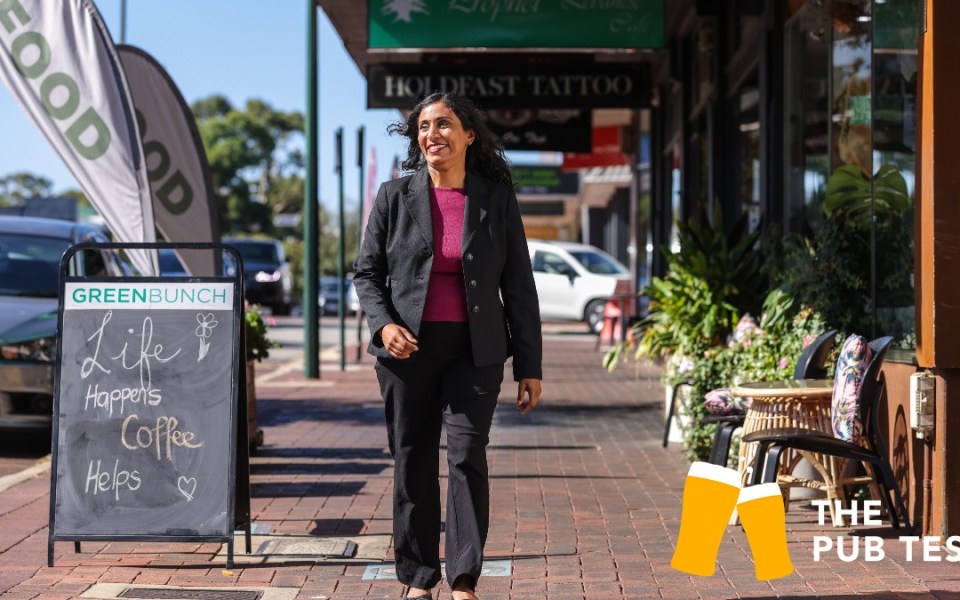 The seat of Swan is shaping up to be one of the tightest contests of the federal election, with Liberal MP Steve Irons retiring from politics and two new major party candidates vying to replace him.

It takes in a diverse mix of suburbs, including the more affluent South Perth and Como, Victoria Park, Rivervale and Belmont to the east, and the foothill suburbs of High Wycombe, Maida Vale, Forrestfield and Wattle Grove.

The Liberals are fielding Sky News commentator, PR guru and former Liberal political staffer Kristy McSweeney as their preferred candidate, while Labor is backing chemical engineer Zaneta Mascarenhas, who was raised in the Goldfields.

Koreng Noongar man Clint Uink is contesting the seat for the Greens, while controversial local councillor Rod Bradley, who recently made headlines for throwing a tantrum during a Town of Cambridge meeting when told he was acting like a child, is standing for the WA Party.

For TND’s final pub test of the election campaign, we visited two pubs – the Balmoral Hotel and the recently renovated Victoria Park Hotel in Victoria Park – and asked five patrons the following question:

This week, Scott Morrison announced a Super Home Buyer scheme in which first-home buyers could use up to 40 per cent of their superannuation savings, up to a maximum value of $50,000, towards buying a home.

The Coalition claims the scheme would help more Australians buy their first home and slash the time needed to save a house deposit by three years on average.

But many economists have said the scheme would drive up house prices and fail to lift home ownership rates.

“I think there are some benefits to it. My son is 20 and his girlfriend is 19 and they’re never going to get a deposit at the rate property prices are increasing now.

“Young kids need a hand when they’re starting out and this might be the answer.”

“I suppose it would be OK, but let’s face it, this is an election promise so it’s hardly likely this policy will ever see the light of day. There’s no guarantees.”

“I agree with it.

“Young kids need a roof over their heads now, not in 20 years’ time. By that time, they’ll well and truly be priced out of the market – even more than they are now.”

“I’m not convinced. What’s the benefit if it’s going to drive property prices up further? We’re already seeing crazy property prices not only in Perth but all over the country.”

“It sounds like a good idea but I don’t know if it would be helpful, particularly if it’s going to drive property prices up further and take away from my savings when it does come time to retire.”

The scheme was one of the only government election announcements made during the campaign that failed to win Labor’s support, with super funds and economists saying it would drive up property prices while eroding people’s retirement savings.

The opportunity to access savings today that would otherwise be locked away until retirement could nonetheless prove popular among younger voters.

But only time will tell if it’s enough to convince Australia’s undecided voters to give their support to the Coalition.