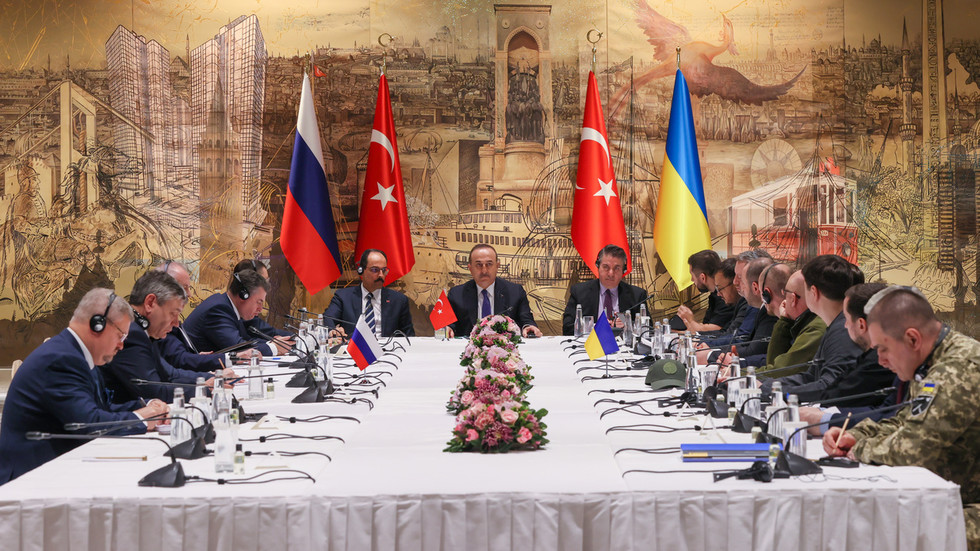 The April 9 visit by British Prime Minister Boris Johnson played a major role in persuading Kiev to break off negotiations with Moscow, the newspaper Ukrayinska Pravda reported on Thursday, citing officials close to Ukrainian President Volodymyr Zelensky. The West had originally advised Zelensky to flee because Russia would win in 72 hours, but was now backing him fully, they claimed.

According to the “behind-the-scenes look” at the negotiations with Russia published in the Kiev-based outlet, Ukraine’s western allies were convinced that the Russian military would seize Kiev within three days and offered Zelensky to govern from exile in London or Warsaw.

When Kiev still stood on February 27, and Russia offered negotiations, Zelensky sent a delegation with the goal of creating the impression he was willing to make a deal. According to Ukrayinska Pravda (UP), the points of agreement made public by Russian envoy Vladimir Medinsky after the March 29 talks in Istanbul, Turkey “are in fact true.”

Then Russian troops withdrew from northern Ukraine and British PM Boris Johnson arrived in Kiev, “almost without warning” on April 9.

Johnson brought “two simple messages” with him, according to UP. The first was that [Russian President Vladimir] Putin was “a war criminal, who should be prosecuted and not negotiated with.” The second was that if Ukraine was ready to sign some kind of agreement with Russia, the West was not.


Johnson’s message was understood as a signal that the collective West “now felt that Putin was not really as omnipotent as they had imagined,” according to Ukrainian officials quoted by UP. Between what they described as Ukrainian military victories and alleged Russian atrocities in “Bucha, Borodyanka and Mariupol,” the West stopped being “isolationist” and pledged to help Ukraine with all sorts of heavy weapons. Kiev officials are now publicly planning for a “total defeat” and “capitulation” of Russia.

“The moral and values gap between Putin and the world is so great that even the Kremlin will not have a negotiating table long enough to bridge it,” according to UP.

Moscow has said its military operation in Ukraine is proceeding as planned, with the “second phase” focusing on destroying or compelling the surrender of Ukrainian forces that have been shelling the Donbass for years. The Russian military is also using long-range missiles to destroy railway junctions used to bring in NATO weapons into Ukraine, as well as warehouses where they are being stored.

Russia attacked the neighboring state in late February, following Ukraine’s failure to implement the terms of the Minsk agreements, first signed in 2014, and Moscow’s eventual recognition of the Donbass republics of Donetsk and Lugansk. The German and French brokered Minsk Protocol was designed to give the breakaway regions special status within the Ukrainian state.