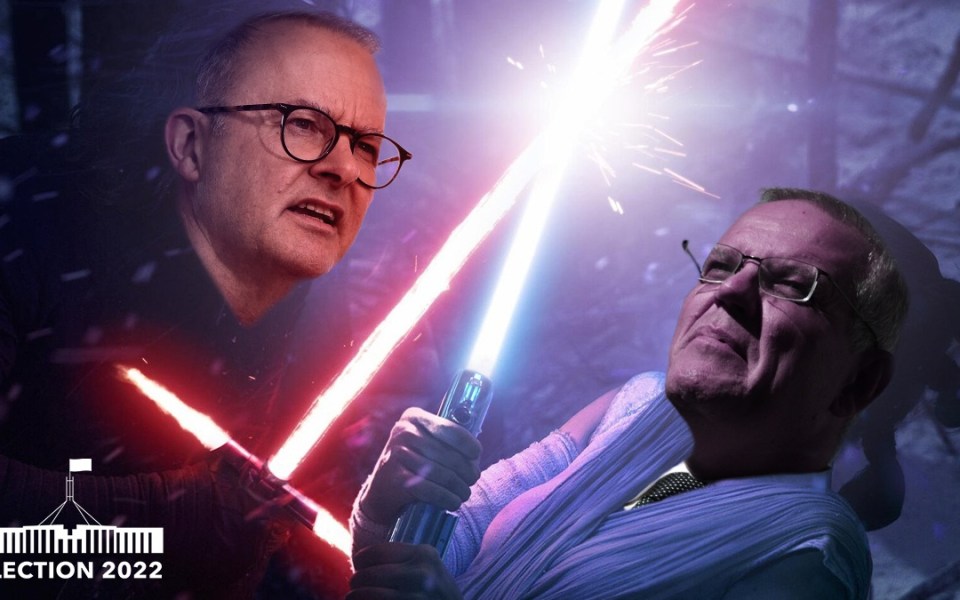 Week four of the federal election campaign has been filled with more bizarre moments and meme warfare. Intergalactic warfare, even.

Wednesday, of course, was the fourth of May — also known as ‘Star Wars Day’.

The major parties had an absolute field day with their Star Wars-themed memes.

Plus, the Prime Minister was forced to defend his culinary skills when an image from his ‘family curry night’ came under scrutiny.

Let’s take a look at the memes and memorable moments that made a splash on social media this week.

May the fourth be with you

The major parties came head to head again this week – not in the form of debate, but rather through the use of Star Wars memes.

The trend was kicked off by Scott Morrison’s camp during his 2019 election campaign with this bobblehead-like Jedi creation.

Luckily, the Liberal party’s Photoshop skills seem to have advanced since.

Both parties brought their meme A-game this Star Wars Day.

Over on the Labor Party’s socials, the meme creators took aim at Mr Morrison’s infamous “not my job” line, superimposing his face into this iconic scene from A New Hope.

Meanwhile, the Liberal Party had a clever take on the Star Wars franchise’s opening crawl.

The made-up opening tells the backstory of the ‘Liberal Alliance’, taking several swipes at Labor leader Anthony Albanese and the Opposition in the process.

“A threat has stirred from the ashes of the Shorten Empire. Their new leader Albanese has no plan for the economy,” it reads.

Scott Morrison is known for sharing his undying love for curry on social media.

They always seem to get a heated online discussion going, but his post from this week’s curry night was perhaps his most controversial yet.

On Sunday night, the PM cooked dinner for his wife, Jenny, and their daughters.

“Nice to have a night at home. So curry it is. Sri Lankan tamarind eggplant and okra curry and a classic chicken korma,” he wrote in a Facebook post.

The caption itself is enough to ignite a Twitter storm, but in fact, it was a piece of pink chicken sitting in the korma that caught peoples’ eyes.

His followers were quick to point out that his chicken korma appeared a little on the ‘rare’ side.

Some brutal excerpts found in the comments section:

“As undercooked as his policies.”

“Hope jenny and the girls have strong stomachs!”

The curry snap instantly spawned a number of memes, including a zinger from the Scott Morrison PM of Australia parody account.

“Had a few minutes free tonight so I whipped up some Chicken Sashimi for Jen and the girls.”

The Prime Minister eventually stepped in to defend his cooking skills in the comments section, attempting to reassure users that the chicken was, in fact, “cooked”.

With his blue-ribbon Victorian seat under threat, Treasurer Josh Frydenberg is upping his meme game. Or trying to, rather.

Independent candidate for Monique Ryan has been making some noise in Kooyong, even drawing the first place on the ballot paper.

In light of the stiff competition, Mr Frydenberg appears to be making an attempt at appealing to the younger crowd through the use of social media.

In one viral TikTok, Mr Frydenberg is seen jumping up and down in excitement with TikTok user Mimi Tuddenham when she “rocks up” to the same restaurant as the Treasurer.

It wasn’t the only viral moment from Mr Frydenberg’s campaigning efforts this week.

One Twitter user mused that it reminded them of this now-iconic Aussie television moment:

Independent candidate for Flinders Sarah Russell got in on the meme game this week — using the format of a classic footy record to outline her dreams and current gripes.

Dr Russell gets major points for using a creative format and bringing a bit of lighthearted fun to the contest.