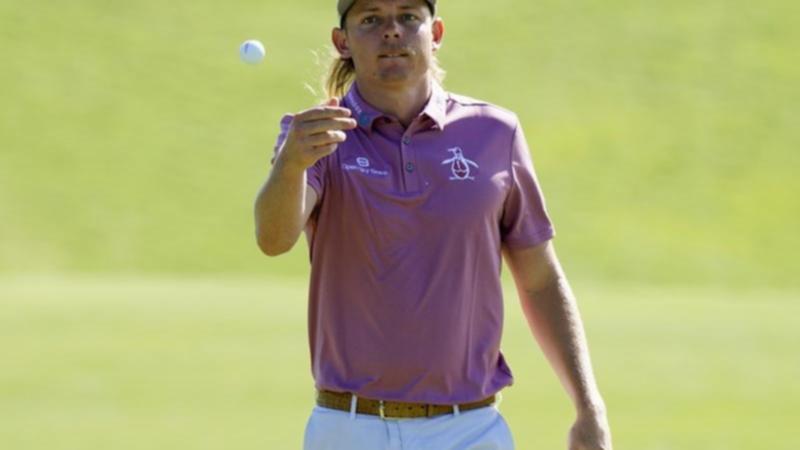 Cameron Smith’s putter was running icy cold on a day when he needed it to get hot in the desert – but he’s still not out of the hunt at the Saudi International.

Australia’s No.1 men’s player suffered three bogeys in the last six holes and drove into the water at the last to conclude his off-day on Saturday’s third round ‘moving day’.

While getting no luck whatsoever at at the Royal Greens Golf and Country Club, the Queenslander ended with a level par 70, a disappointing return after two successive 66s, while losing ground on all his title challengers.

Yet after another difficult windswept day, Smith was still only four shots behind US leader Harold Varner III, whose 68 left him at 12 under overall – and his Australian colleague Wade Ormsby was not out of the hunt either for the $US 900,000 first prize.

Adelaide veteran Ormsby shot a two-under-par 68 to lie just a shot behind Smith on seven under alongside the ominous figure of American defending champ Dustin Johnson, who made his move with a 67.

“It’s quite tough out there, it’s just a matter of hanging in there,” said the 41-year-old Ormsby.

“I didn’t have a great week in Dubai last week but I’ve been putting well and I’m hitting it better here. Hopefully, I can have a good one tomorrow and get in the mix.”

It had all started promisingly for Smith, who had set off just a couple of shots off the lead, with a couple of quick birdies.

But the usual sure-fire touch of one of the world’s best putters went AWOL with a couple of short misses.

Any chance of a strong finish disappeared with a couple of pieces of bad luck. At the 17th, his excellent drive ended in a difficult position, nestled against the collar of rough and fairway, and a birdie chance turned into a bogey.

Then at the last, his drive took a hot bounce which shot it into the water flanking the course. He did well to recover and make a par five but playing partner Varner, a former Australian PGA winner, showed him the way with a final-hole birdie.

Varner is one shot ahead of Spain’s Adri Arnaus and a couple clear of English star Tommy Fleetwood, whose 67 has put him in a threatening position.

Among the rest of the Australian contingent, Brad Kennedy moved up to four under for the tournament with his 67, while Lucas Herbert was 32nd on level par after a 71.