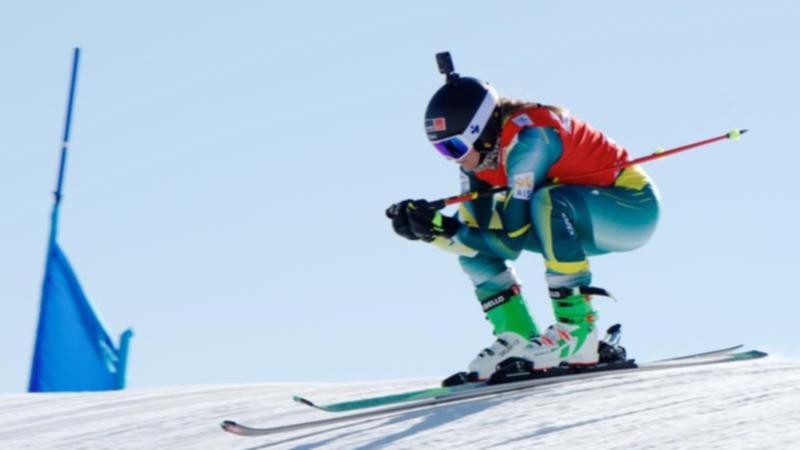 Suffering a stroke in her mid 20s, skier Sami Kennedy-Sim looked unlikely to make it to one Winter Olympics but instead she will be lining up for her third in Beijing next month.

Now 33, Kennedy-Sim will represent Australia in the ski cross, while 19-year-old Abi Harrigan was also named Saturday to make her Games debut in the freeski halfpipe, slopestyle and big air events.

They join skeleton and luge racers Jackie Narracott, Nick Timmings and Alex Ferlazzo, while athletes from five other winter disciplines will be announced on Sunday.

Currently competing in the Ski Cross World Cup in Idre Fjall, Sweden, where she has qualified sixth for the final, Kennedy-Sim was ecstatic to make her third Olympic team.

“I am so proud to have been selected to represent Australia at my third Games,” she said.

“Having an Olympics in a similar time zone to Australia means that I will feel connected with my friends and family – ski cross is on at prime time so I can’t wait to share this experience with everyone, I’m so excited.”

Kennedy-Sim’s world was turned upside nine months out from the Sochi Olympics in 2014 when she had the stroke, put down to a blood clot in her leg and small hole in her heart, which later required surgery.

But the Sydney athlete said the setbacks made her who she was.

“I made that full recovery, and it’s shaped me now to be incredibly resilient,” she said.

Teenager Harrigan will become Australia’s first representative in the big air, which is a new addition to the Olympic schedule.

“It’s the first time big air is in the Olympics and I get to compete, it’s amazing. I’m so excited to be on the biggest stage.”

Raised in Jindabyne at the foot of the NSW snowfields, Harrigan had her best result of the season in last week’s World Cup event in Font Romeu, France, finishing 13th in the slopestyle.