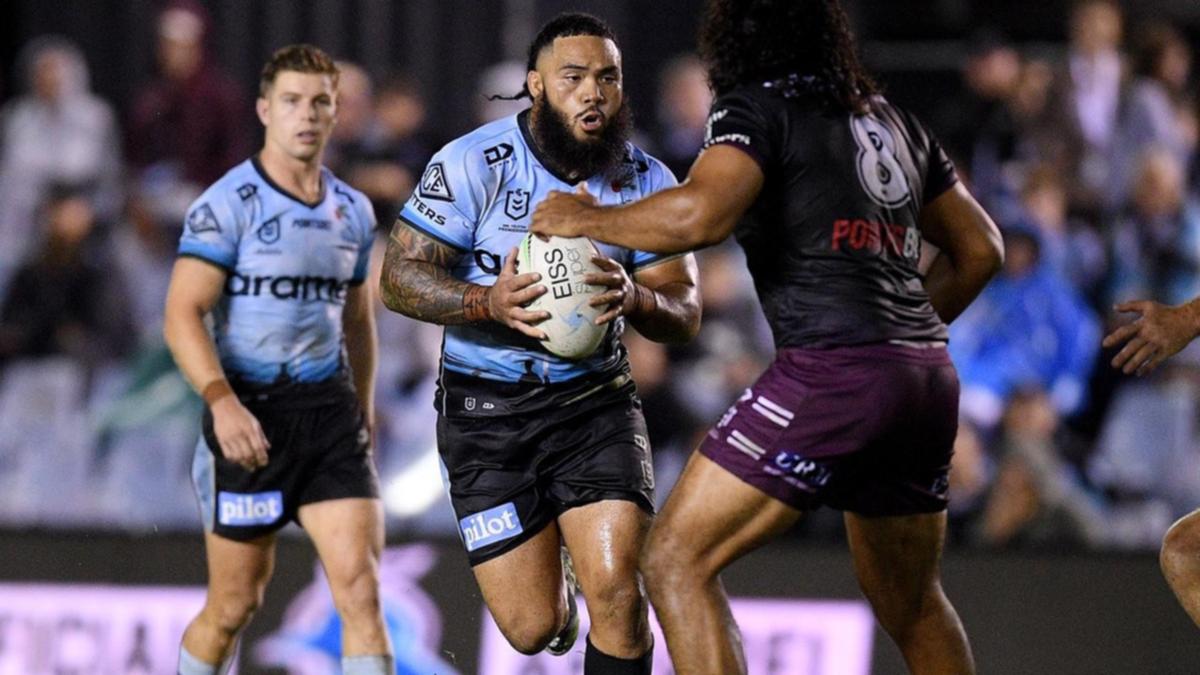 Talakai put in one of the most destructive performances in the NRL era at Shark Park on Thursday night, setting up three tries and crossing for two of his own.

The 25-year-old was so dominant that Manly gave opposing centre Morgan Harper the hook at halftime.

His performance, which also took in 241 running metres and 11 tackle busts to go with his hand in five of Cronulla’s six tries, was acknowledged by Blues coach Brad Fittler on the Nine Network.

With Latrell Mitchell facing a race to get fit for Origin I in Sydney on June 8, Fittler has a left centre berth to fill.

Sharks coach Craig Fitzgibbon, who has worked as part of Fittler’s support staff in recent years, said his centre was more than ready to fill the void.

A Blues call-up would cap a remarkable rise for Talakai after he was forced to work on the bins following unsuccessful stints at South Sydney and Penrith.

“I definitely want to make myself eligible for NSW,” Talakai said.

“I want to try and make Origin first and hopefully I can do that.”

There is another significant pull for the galloping garbo.

Talakai has been in regular discussions with Tonga coach Kristian Woolf about lining up for a Test match against New Zealand on June 25 which falls on the same weekend as Origin II.

“With Tonga being a tier two nation I know I can play there (internationally) as well,” Talakai said.

“I’ve been talking to Woolfy quite a bit.

“We already have that kind of relationship where if he picks me I’m grateful, I’m still just grateful just to have him in my contacts.”

Talakai began the year as an interchange forward and second row before moving into the Sharks’ left centre spot in round four. It’s a move which has yielded four tries and as many try assists.

Fitzgibbon said he liked the idea of not confining the wrecking ball to one position and Talakai thanked the Sharks coach for his show of faith.

“I missed a bit of the pre-season because I wasn’t vaccinated and had to wait to get my vaccination so I could train,” Talakai said.

“He’s been good, we’ve just been working on little things. I had a point to prove, I thought last year wasn’t up to standard and I had let myself down.

“Just talking to him, he fills you with confidence. Our defence has been the biggest thing because we always knew we could attack.”