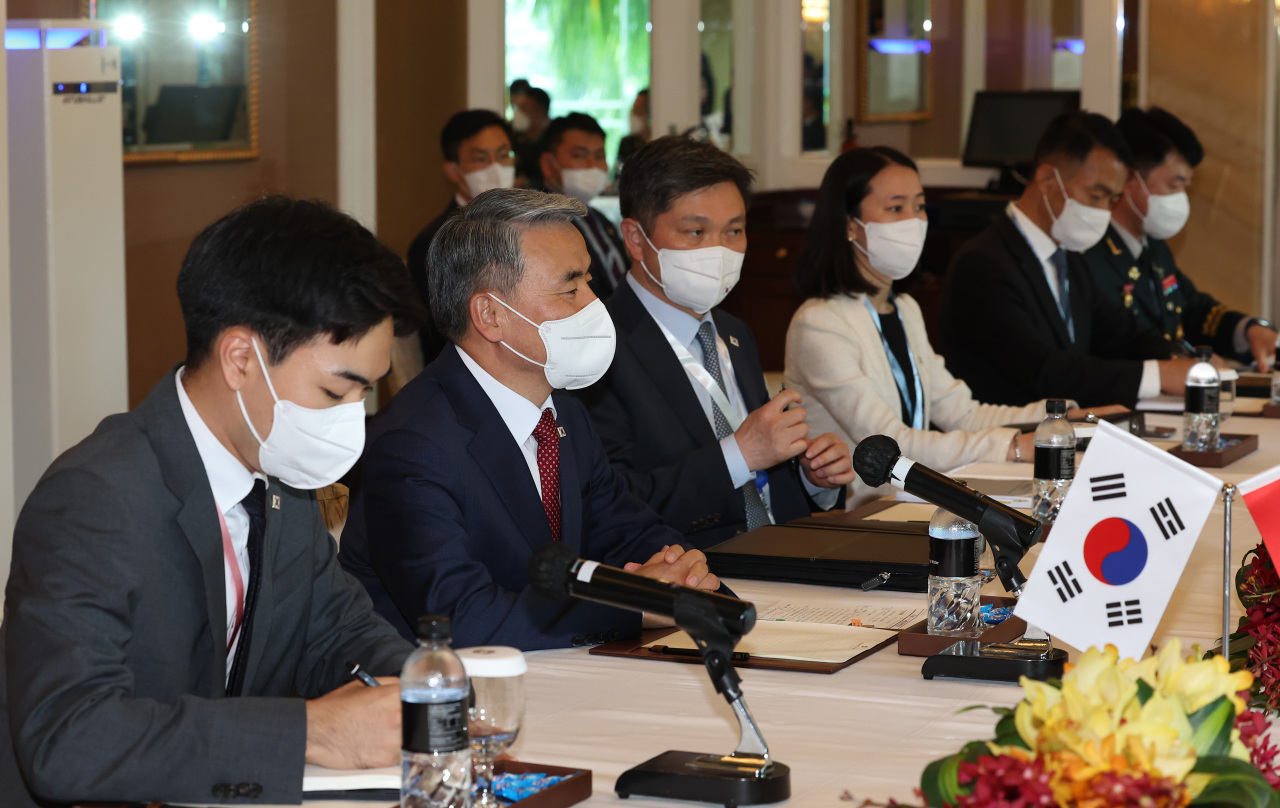 SINGAPORE — South Korean and Chinese defense chiefs on Friday committed to rejuvenating military exchanges and cooperating in resolving North Korean issues during a bilateral meeting held in around three years.

South Korean Defense Minister Lee Jong-sup had his first encounter with his Chinese counterpart Wei Fenghe in the afternoon on the sidelines of the three-day Shangri-La Dialogue Asian security summit that runs until Sunday in Singapore.

Reinvigorating military exchanges
Lee and Wei discussed ways to boost and expand defense cooperation during a 75-minute meeting that began at 14:00 local time and was 35 minutes longer than scheduled.

The two leaders committed to revitalizing military exchanges across the Army, Navy, and Air force as well as interactions between South Korean and Chinese defense ministries such as the resumption of vice-ministerial defense strategic dialogue, South Korea’s Defense Ministry said in a Korean-language statement.

“Minister Lee underscored the necessity of strengthening substantive and reciprocal cooperation based on the principle of mutual respect and common interest between the two countries on the occasion of the 30th anniversary of establishing diplomatic ties between Korea and China,” according to South Korea’s Defense Ministry.

In return, Wei expressed his consent and expectations to develop bilateral relations by expanding military exchanges across the broad.

The two sides also committed to pushing forward mutual visits by the defense ministers of the Republic of Korea and China, but they did not agree on a specific date.

Operating military hotlines
The South Korean and Chinese defense chiefs also agreed to open and operate two more military hotlines between their air forces and navies in the eastern theater of the Chinese People‘s Liberation Army as of Friday.

Seoul and Beijing have three existing hotlines — one between their defense ministries and two between their air forces and navies in the northern theater of the PLA.

The two countries previously agreed to establish two more direct communication lines in accordance with their memorandum of understanding on hotlines between the South Korean and Chinese navy and air forces signed in 2021.

Lee and Wei agreed that the operation of additional hotlines will “greatly contribute to preventing accidental clashes between armed forces of the two countries” and attached the great significance to the decision, according to South Korea’s defense ministry.

The opening of new hotlines is significant particularly in light of Chinese military aircraft’s continuing intrusion of South Korea’s air defense identification zone, a senior official at South Korea’s Defense Ministry, who wished to remain anonymous, said during a closed-door briefing in Singapore.

N.Korea’s missile and nuclear threats
The South Korean and Chinese defense ministers also discussed the security situation on the Korean Peninsula and in the region and the North Korean nuclear issue.

“Minister Lee underscored the necessity for both South Korea and China to work together to ensure that North Korea recognizes the benefits of abandoning nuclear weapons outweigh the costs of possessing nuclear weapons,” South Korea‘s Defense Ministry said. ”(Lee) emphasized that China can play a constructive role in this process.”

“(Wei) hoped that South Korea and China would cooperate to resolve the issues of the Korean Peninsula as both sides share the understanding on the matter.”

The salience of the meeting was to confirm that both “share the goal of achieving denuclearization of the Korean peninsula,” the senior said, adding Wei gave an affirmative response to Lee’s request.

Seoul has called for Beijing to play a constructive role in resolving the North Korean nuclear issue and using its leverage to stop North Korea from conducting a seventh nuclear test.

In addition, China also “expressed concerns” over the deployment of the US-made Terminal High Altitude Area Defense (THAAD) battery during the meeting.

The Yoon government also aims to ensure the full-capacity operation of a military base that hosts the THAAD interceptor system at an early date, which will irk China. But the senior official said both sides did not have a detailed discussion on the issue.

“We emphasized that it was a defensive and essential measure that we had to take against North Korea’s sophisticated nuclear threats,” the official said.

China’s containment against Indo-Pacific strategy
The bilateral meeting was held at the request of the Chinese defense minister, according to South Korea’s Defense Ministry.

Such a meeting was held for the first time in two years and seven months. The South Korean and Chinese defense chiefs last met in November 2019 on the occasion of the Sixth ASEAN Defense Ministers’ Meeting Plus held in Bangkok, Thailand.

The senior official said the meeting has significance in light of the first in-person interaction between Chinese and South Korean defense chiefs since the inauguration of the Yoon government in May.

Lee also assesed that the meeting “serves as a good opportunity to have a very profitable discussion and to get to understand each other“ during an impromptu briefing.

“With regard to the Indo-Pacific strategy, Lee said (South Korea) is pursuing the goal of establishing a rule-based (international) order, citing freedom of navigation and overflight as examples. But he went on to say that the goal does not undermine China’s national interest,” the senior official said.

The bilateral talks between South Korea and China also came just before US Defense Secretary Lloyd Austin had their first in-person interaction with his Chinese counterpart on Friday evening in Singapore.