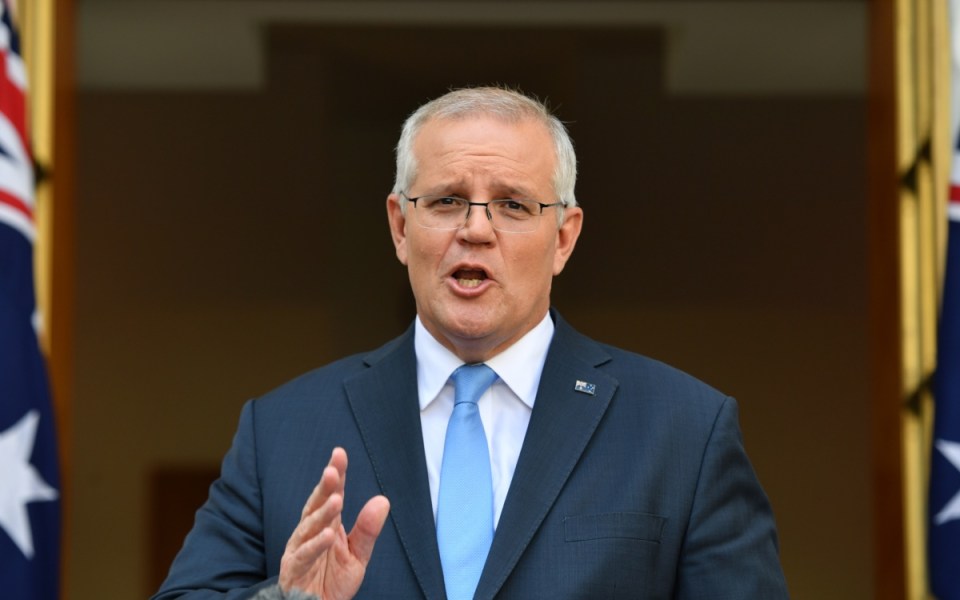 Something strange happened soon after the Prime Minister visited the Governor-General to get the nod for a May election: Scott Morrison declared the poll was not about him.

It is a choice he admits, but the choice is between the Coalition government or the Labor Opposition – true as far as it goes, but it falls a long way short of reality.

Morrison knows it and you only need to go back to the way he framed the 2019 election to get this point.

He made it a very sharp choice for voters, one which he returned to throughout the campaign buttressed by research that voters were wary of Bill Shorten and lacked trust in him.

He peppered his opening spiel with the Labor leader’s name, something he remarkably didn’t do on Sunday in regard to his latest opponent.

Anthony Albanese was not mentioned once by name.

Morrison had a more urgent task. He had to somehow distance himself from his government to give it a better chance of holding on to power.

Almost in his first breath at his news conference Morrison said his government “is not perfect” and had never claimed to be. He went on to say they had “been upfront and you may see some flaws”.

Clearly, he was talking about himself.

The principal flaw, of course, is far from being upfront – this Prime Minister is a past master at obfuscation, blame shifting and coming late responding to crises.

This goes a long way toward explaining why the approval of his performance in the latest Newspoll continues to be deep in negative territory.

In a piece of curious framing, Morrison says others will seek to make the election about him, but “it’s actually about the people who are watching this right now. It’s about them”.

What we have is an admission of vulnerability that leaves the Prime Minister in the position of arguing you may not trust me, but you can trust Labor even less because it is “a blank page”.

However, if the “untrustworthy” Morrison is the one making all the claims about how wonderful the government’s record is and how dangerous the “blank page” is, then it lacks potency.

Morrison can’t hide and lead the attack at the same time, especially if he keeps feeding the perceptions that have voters marking him down.

The latest example is the fate of stood-aside Education Minister Alan Tudge – except we were led to believe in March that he had quit the ministry, now we find out he merely stood aside and is welcome back after the election.

Morrison told us then that Tudge was “not seeking to return to the front bench, and I support his decision”.

In more obfuscation that is so convoluted as to be simply disingenuous the PM says Tudge is still education minister, but he is unpaid, and Stuart Robert is the “acting” minister. No one else has been sworn in.

Morrison claims a “full inquiry” exonerated Tudge of breaching ministerial standards when he had an affair with his staffer, Rachelle Miller back in 2017, except the inquiry was not presented with all the evidence pertinent to Tudge’s integrity regarding a security clearance and the standards changed in 2018 banning sexual relations with staffers.

Besides hanging a lantern over Morrison’s problems with women voters, this resurgence of the Tudge/Miller affair has also left the Prime Minister claiming no knowledge of a $500,000-plus payout to Ms Miller by the Finance Department.

Morrison told Today it would be “inappropriate” for him to have knowledge because it is “a private and sensitive” matter.

Labor’s campaign spokesman Jason Clare would have none of it, saying “it is the Prime Minister’s job to know about it”.

“This is a cabinet minister in his government. This is a former cabinet staffer and this is half a million dollars” of taxpayers’ money being paid in compensation.”

Morrison had no satisfactory answer to Karl Stefanovic, who summed up the imbroglio succinctly: If Tudge didn’t do anything wrong, “what’s the money for? If he did, why is he still a cabinet minister?”.

Morrison can be grateful that the opponent whose name can no longer be mentioned stuffed up badly on Monday when he didn’t know the current unemployment rate or Reserve Bank official interest rate.

Albanese’s memory lapse fed straight into the government’s attack lines on Labor and the economy.

The Labor campaign quickly tried to turn a negative into a positive, with Albanese admitting to his “mistake” because he’s human, “but when I make a mistake, I will fess up to it and I will set about correcting that mistake”.

The sting was in the tail: “I won’t blame someone else. I will accept responsibility. That’s what leaders do.”

The half million-dollar question is who came out of day one of the campaign ahead and what will that do to the choice ahead whether Morrison claims to be part of it or not?

Paul Bongiorno AM is a veteran of the Canberra Press Gallery, with 40 years’ experience covering Australian politics