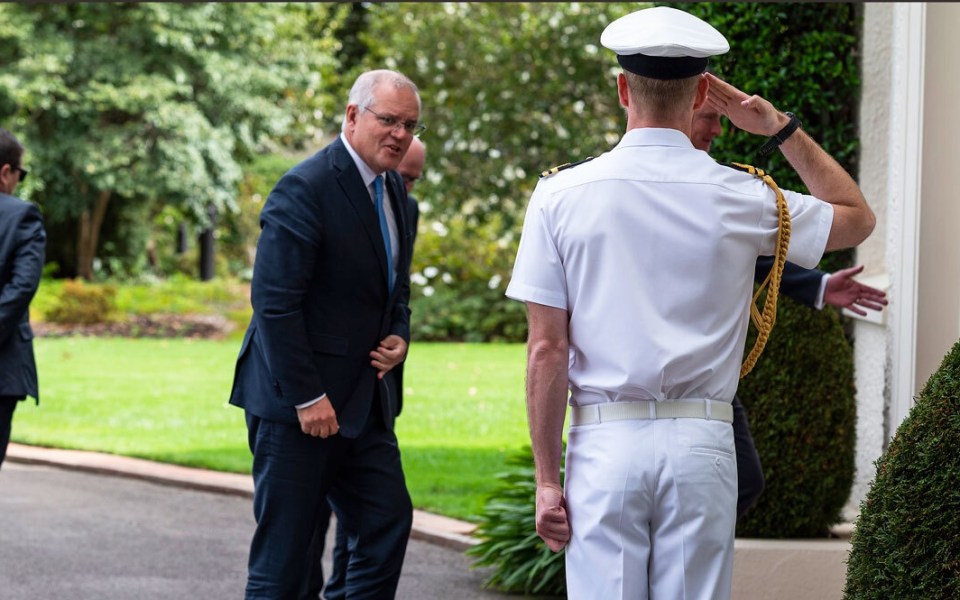 Prime Minister Scott Morrison has called an official start to a six-week federal election campaign culminating in a May 21 poll.

Mr Morrison flew to Canberra this morning before visiting the Governor-General, Sir David Hurley, to ask him to dissolve Parliament.

The Prime Minister is campaigning for a fourth consecutive term for the Coalition in an election he framed as a choice between a “strong future and an uncertain one” with a heavy accent on the classic Coalition theme of economic management.

“We are dealing with a world that is less stable than at any other time than the Second World War,” he said speaking before reporters at Parliament House shortly after calling on the Governor-General.

“Now is not the time to risk that.

“This is… a choice between a strong economy and a Labor opposition that would weaken it.”

Mr Morrison enters the campaign down by a yawning margin of 57 to 43 on a two-party preferred basis in the latest Roy Morgan poll as questions about his character and internal Liberal Party battles have intensified.

But Mr Morrison on Sunday sought to sidestep the issue of his personal popularity, framing the choice before voters as a strict referendum on competence and not character.

“Our government is not perfect – we’ve never claimed to be – but we are up-front,” the Prime Minister said.

“This election is about you – no one else.

“It’s about our country and it’s about its future.”

Labor deputy leader Richard Marles told the ABC on Sunday, talking down the Opposition’s lead and saying the election would be a “real struggle.”

Mr Marles repeated criticisms of Mr Morrison’s character that have engulfed the Prime Minister and obscured his generous, pre-election budget.

“The Prime Minister lies,” he said.

“Every time he stands up, he lies.”

In a campaign video released to social media on Saturday, Mr Morrison claimed 40,000 Australian lives had been saved and 700,000 jobs preserved because of the government’s handling of the pandemic.

Soon afterwards, Labor released an attack video taking the government’s and stamping its own attack message on it: “No more mistakes. No more excuses. No more Morrison.”

The Coalition starts the race with 76 seats out of the 151-seat lower house, with Labor on a presumptive 69.

After an unstable period in Australian politics, Mr Morrison is seeking to be the first Prime Minister to win two elections since John Howard.