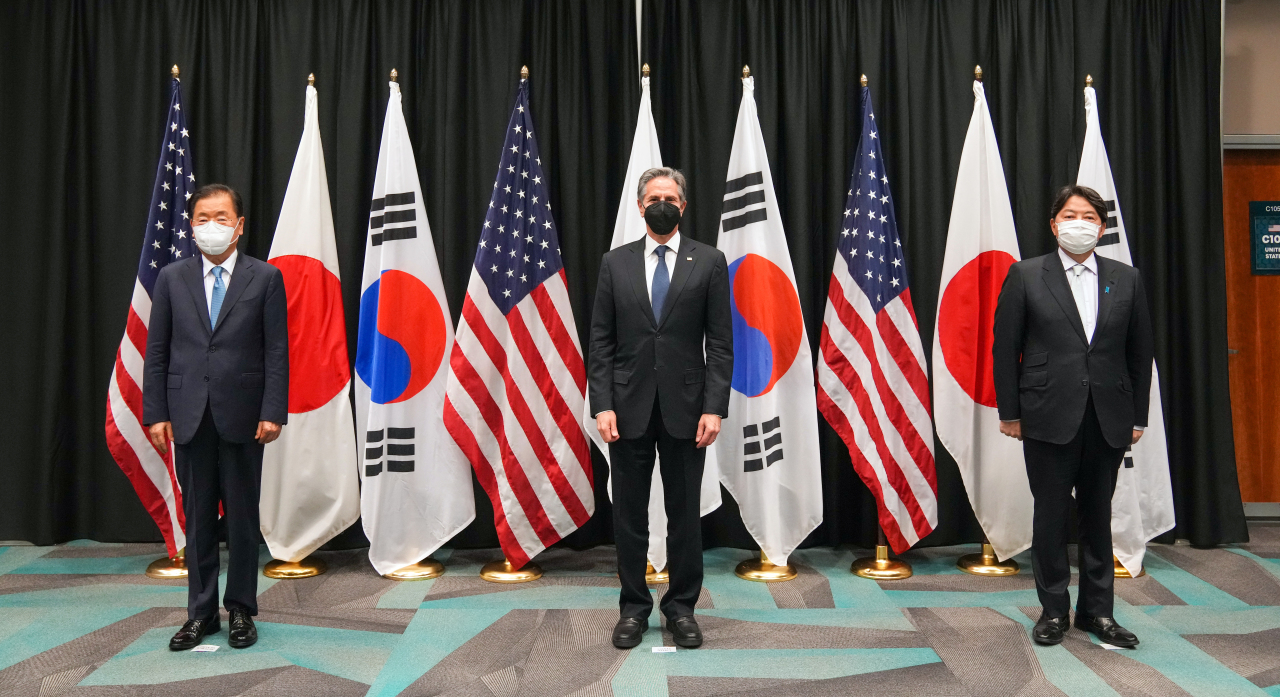 The top diplomats of South Korea, the US, and Japan committed to aligning their diplomatic approaches to North Korea and advancing trilateral security coordination in maintaining regional peace and stability.

“They committed to close trilateral cooperation to achieve complete denuclearization and lasting peace on the Korean Peninsula,” the English-language joint statement read.

The three top diplomats called on North Korea to “cease its unlawful activities and instead engage in dialogue, while condemning North Korea’s recent ballistic missile launches and expressing “deep concern about the destabilizing nature of these actions.”

“We discussed ways that we can deepen trilateral cooperation to deter the DPRK, limit the reach of its most dangerous weapons, defend against its provocations or use of force and above all, keep the American, Japanese and Korean people safe, which is our highest responsibility,” Blinken said during a joint press conference following the meeting.

Blinken notably underscored that the importance of Saturday’s joint statement is that it shows the aligned and united approach of the US, South Korea, Japan to North Korea, pointing out that Pyongyang “is in a phase of provocation.”

“… We are absolutely united in our approach, in our determination. And that unity of purpose is, I think, vitally important for dealing with the challenges posed by the DPRK and also pursuing a more hopeful future.”

Blinken clarified the three countries’ readiness to engage with North Korea without preconditions and their coordination on taking steps to hold North Korea responsible for missile launches.

“We will continue to hold the DPRK accountable, even as we seek to engage in diplomacy.”

The three top diplomats also “emphasized they held no hostile intent towards the DPRK and underscored continued openness to meeting the DPRK without preconditions,” according to the joint statement.

Speaking at the press briefing, the US secretary of state expressed regret that North Korea has responded to the Biden administration’s overture for dialogue with a series of “provocative actions.”

But the joint statement notably lacks any concrete plans to push for diplomatic engagement with Pyongyang.

A South Korean official, who wished to remain anonymous, said Chung  “proposed several ways” to bring North Korea back to the negotiating table during his separate, bilateral talks with Blinken.

Chung and Blinken had an “in-depth discussion” on the matter, the official underlined, adding Washington listened with great care to the suggestions by Seoul.

“We are not able to share the details at this time, but we expect to explain the details at an appropriate opportunity,” the official said, pointing to the necessity of continuing further consultation between South Korea and the US.

Enhancing, widening trilateral cooperation
Furthermore, Chung, Blinken and Hayashi on Saturday conspicuously “committed to advance trilateral security cooperation,” reaffirming that the “US-Japan and US-ROK alliances are essential to the maintenance of peace and stability in the region.”

The joint statement came after the announcement by the defense chiefs of the three countries last week. The leaders agreed during a phone call to “closely cooperate” against North Korean threat and hold their first in-person trilateral ministerial meeting under the Biden administration in the foreseeable future.

Seoul, Washington, and Tokyo have sought to enhance trilateral coordination on a wide range of regional and global issues.

The move is in line with the Biden administration’s newly announced Indo-Pacific engagement strategy that aims to align and coordinate the three countries’ regional strategies and handle North Korea issues through trilateral channels.

The goal of Saturday’s meeting was also to “reaffirm the critical importance of strong US-Japan-ROK trilateral cooperation” in seeking to “address the most pressing 21st Century challenges,” according to the joint statement.

The three top diplomats committed to “expand cooperation and collaboration across a range of regional and global security and economic priorities” including ensuring a “free and open Indo-Pacific.”

The other arenas for trilateral coordination cover the climate crisis, “critical supply chains,” global health security, information and cybersecurity, and “economic security including by promoting innovation of critical and emerging technologies based on democratic values and respect for universal human rights.”

“Reaffirming their commitment to US-ROK-Japan trilateral cooperation that is grounded in our shared values and desire for regional peace, stability, and prosperity, the Secretary and Foreign Ministers pledged to continue regular trilateral ministerial consultations,” the joint statement read.

But Chung and Hayashi appeared to reconfirm their differences over the contentious historical issues, which have been the epicenter of their long-standing diplomatic feud and restated each government’s stance, during their separate bilateral meeting.

Chung underscored that the “correct understanding of history is the foundation of the future-oriented development of South Korea-Japan relations,” the ministry said in a statement.

The South Korean foreign minister went on to propose accelerating bilateral consultation to find solutions that the victims of wartime forced labor and “comfort women” — a euphemism referring to Korean women forced to work at Japanese wartime brothels — can accept.

Chung additionally “expressed deep disappointment and protested against Japan’s decision” to recommend the Sado gold mine in Niigata prefecture on the UNESCO World Heritage List as well as called for lifting export restrictions against South Korea.

In response, Hayashi “explained the Japanese government’s stance” on the matter.

But Seoul said the two foreign ministers committed to “close communication between the diplomatic authorities for the future-oriented development” of bilateral relations.