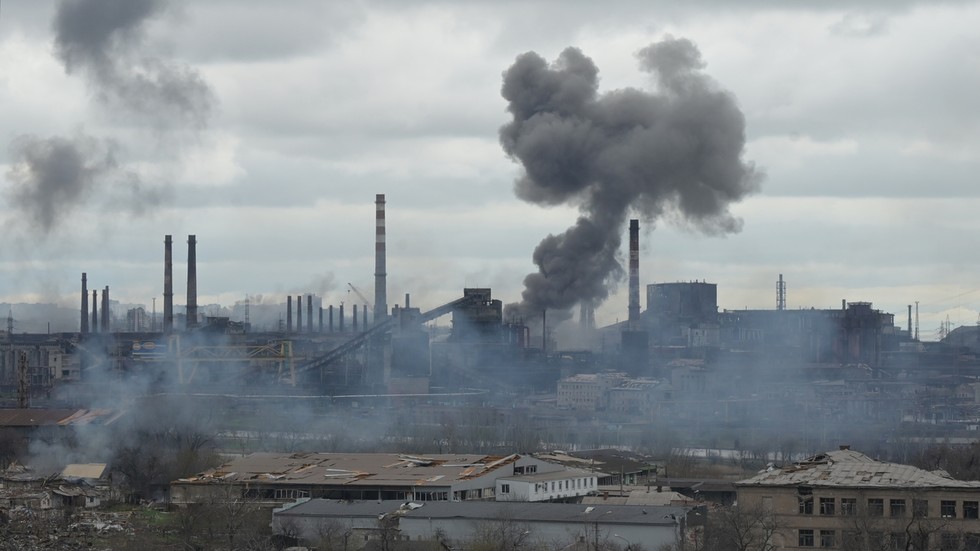 The Russian Defense Ministry has called on the remaining Ukrainian forces, besieged at a steel plant in the coastal city of Mariupol, to lay down their arms, offering guarantees of life and safety, if they accept the proposal and halt all hostilities starting Saturday morning.

“Considering the catastrophic situation at the Azovstal metallurgical plant, and being guided by purely humane principles, the Russian Armed Forces offer militants of nationalist battalions and foreign mercenaries to stop hostilities and lay down their arms starting 6am Moscow time on April 17, 2022,” the Russian Defense Ministry said in a late-night announcement on Friday.

“All who lay down their weapons are guaranteed the preservation of life,” the ministry stated.

Earlier on Friday, Moscow revealed its estimate of Ukrainian casualty numbers, claiming that in the city of Mariupol alone Kiev has lost more than 4,000 combatants, including “foreign mercenaries” and “Nazis” associated with the notorious Azov and Aidar regiments.


In its ceasefire proposal, the Russian military said that the remaining resisting troops are in a “hopeless situation, with virtually no food and water,” citing the contents of hundreds of radio intercepts on Friday alone. The holed-up fighters allegedly “persistently request permission from the officials in Kiev to lay down their arms and surrender,” while Ukrainian authorities “categorically forbid it under the threat of wartime executions,” Moscow claimed.

Moscow has therefore offered Ukrainian troops to establish a direct communication line at 5am, and indicate the beginning of the actual ceasefire at 6am by raising flags around the perimeter of Azovstal – red on the Russian side and white on the Ukrainian side. The Ukrainian units will then have until 1pm to withdraw from their stronghold, without any weapons or ammunition.

Moscow’s proposal and the terms of surrender “will be broadcast continuously throughout the night to Ukrainian formations at Azovstal on all radio channels at 30-minute intervals,” the ministry added.

Earlier this week, more than 1,000 service members of Ukraine’s 36th Marines Brigade allegedly laid down their arms at the Illich Steel and Iron Works, a giant metal mill they were using as a stronghold against Moscow’s forces. The report, however, was disputed by Ukrainian officials.


Mariupol has seen some of the most intense fighting since Russia launched its offensive. Moscow attacked its neighbor in late February, following Ukraine’s failure to implement the terms of the Minsk agreements signed in 2014, and Russia’s eventual recognition of the Donbass republics of Donetsk and Lugansk. The German and French brokered Minsk Protocol was designed to give the breakaway regions special status within the Ukrainian state.

Russia has since demanded that Ukraine officially declare itself a neutral country that will never join the US-led NATO military bloc. Kiev insists the Russian offensive was completely unprovoked and has denied claims it was planning to retake the two republics by force.