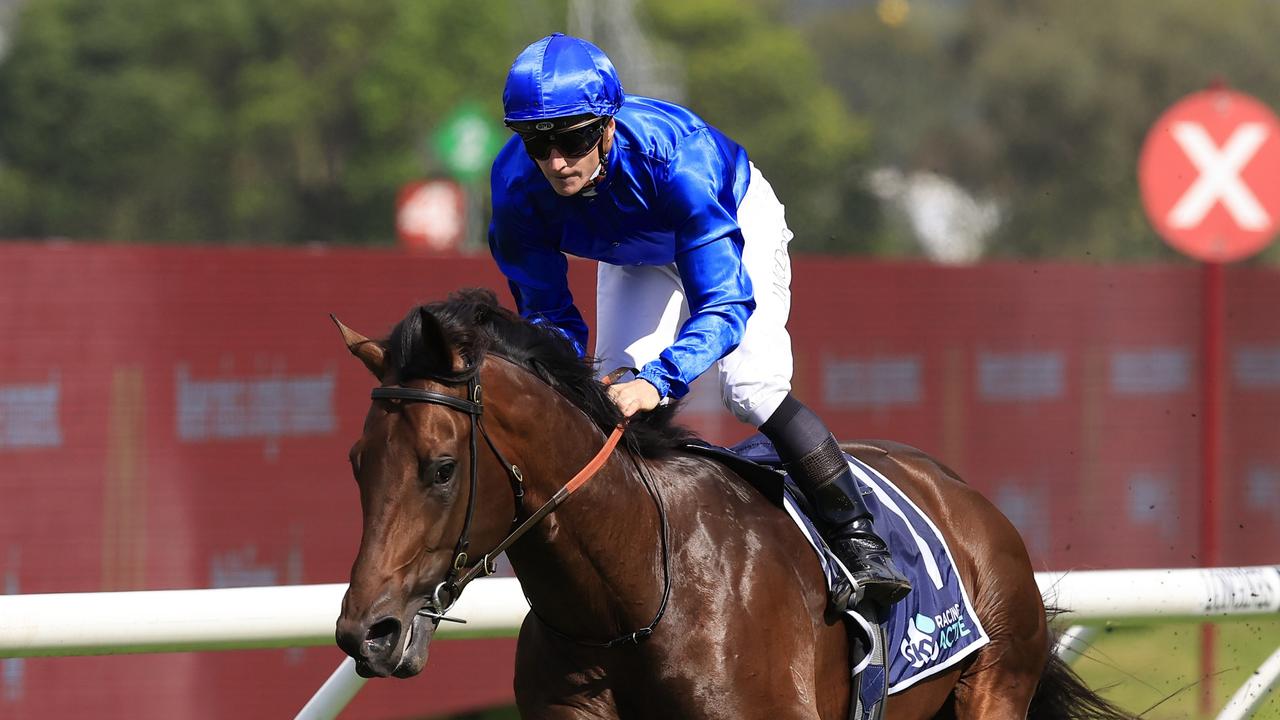 This was Anamoe’s moment, the opportunity to confirm his status as the rising superstar of Australian racing – and it was breathtaking to watch.

In a few strides, Anamoe unleashed a devastating burst of acceleration that turned the Group 1 $600,000 Rosehill Guineas (1600m) into a procession.

Anamoe won like a champion. Perhaps it is too soon to bestow racing’s ultimate accolade on the Godolphin colt but by the end of the autumn carnival he might settle the debate.

Because this was a performance worthy of champion status. The official winning margin was 6½ lengths and Anamoe’s jockey, James McDonald, was being kind to his opposition.

Godolphin trainer James Cummings felt the time was right to use the “C” word for Anamoe.

“It has been wonderful for everyone to see what I have been able to see, the potential in the horse….and he has put on a display in a really good race, a classic,’’ Cummings said.

“He towelled them up. That’s a sign of a quality horse, I think. If that’s not the performance of a champion three-year-old this season, I don’t know what is.’’

Anamoe wasn’t beating mediocre opposition, either. He left dual Group 1 winner Converge and the much-vaunted Profondo among others in his wake.

McDonald snuck a peak over his right shoulder just inside the 100m mark and was easing down on Anamoe ($1.70 favourite) well before the finish as the colt coasted over the line well clear of Converge ($3.80) with Forgot You ($11) nearly a length away third, followed by early leader Profondo.

This was McDonald’s 50th Australian Group 1 winner and the 62nd of his career – and it is doubtful he has ridden an easier big-race winner.

McDonald shook his head passing the post, almost as if he was incredulous to what Anamoe had done to his opposition.

“Obviously the plan was to get back a bit and let the race unfold, but he began really alertly and sprung into stride, I just didn’t want to disappoint him so I let him go,’’ McDonald said.

“Once he got to the front you could see James (Cummings) pulling his hair out but he (Anamoe) was relaxed and Profondo went around because of the slow tempo.

“This gave my colt a nice cart up and he did the rest, he’s a pretty smart horse.’’

“He was really above himself last start, I reckon he probably should’ve won it to be fair and that was over a mile when he just got left flat footed at a crucial stage,’’ McDonald said.

“But today he was able to flow into it and really accelerate.”

Cummings said Anamoe is being set for the $4m Queen Elizabeth Stakes (2000m) at Royal Randwick during The Championships on April 9.

Anamoe was so impressive he vaulted to the top of Queen Elizabeth betting at $3.50 ahead of reigning Horse of the Year Verry Elleegant at $4, All-Star Mile winner Zaaki at $5 and Ranvet Stakes winner Montefilia at $11.

But how Cummings gets Anamoe to Randwick in three weeks time is still unclear with the trainer floating the possibility of his super colt having another start, most likely at 2400m before the Queen Elizabeth.

Cummings mentioned either the Group 1 $1.5m Tancred Stakes at Rosehill Gardens next Saturday or the $2m ATC Australian Derby at Royal Randwick on April 2.

“We are targeting the Queen Elizabeth with him,’’ Cummings said.

“But I think today he has asserted himself the best three-year-old around and it is exciting to be a part of his journey.’’