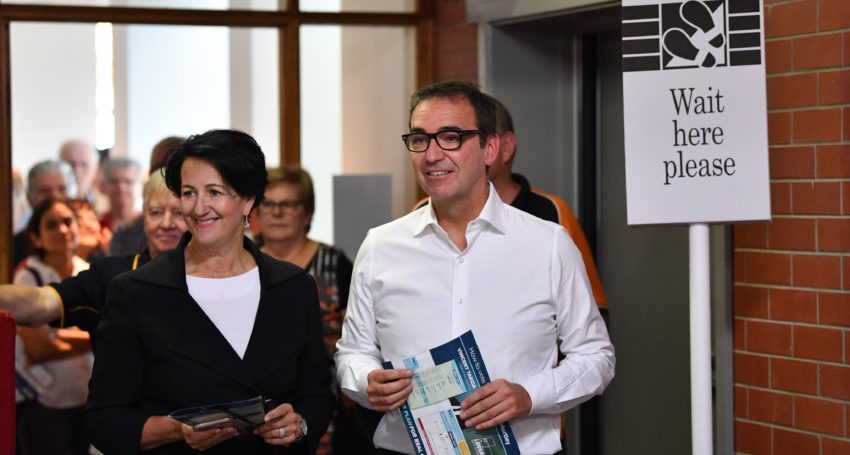 SA’s electoral commissioner Mick Sherry is expecting to see a lot of the former at the forthcoming state election, and will be doing his level best to prevent the latter.

Not that it’s easy in the COVID scenario he’s been handed. If it’s not bad enough that the commission has had to nut out strategies to allow people forced into quarantine by emergency declaration provisions the chance to vote, he’s been hampered by parliament’s inability to provide the flexibility in the electoral act to do so.

Many times yesterday, during a media briefing to outline his solution – a ballot kit provided at COVID testing stations to people isolating due to exposure to the virus – Sherry would note that he “can only operate within the legislation provided to me”.

Thus, no phone voting. No ability to urge people to cast their votes early, to help thin out the crowds on March 19.

“The legislation requires me to encourage people to vote in a polling place on polling day,” he said.

The same goes for political parties. As Opposition Leader before the 2018 poll, Steven Marshall caused a minor kerfuffle by opting to cast his vote – in the traditional media set-piece – almost two weeks early, while his party’s ‘Vote Early’ website raised the ire of the Electoral Commissioner.

That, though, was a sign that the way elections are fought is changing.

While tradition dictates that the campaign reaches fever pitch in the final week, when full costings are revealed and major pledges detailed, these days early voting seems to be more of a lifestyle choice.

Indeed, so prevalent has it become that I’m told that back in 2019 – pre-pandemic – two senior ALP figures made a friendly wager, with a good bottle of wine at stake, that this year’s election would see more declaration votes – early and postal ballots – than votes cast on election day itself.

Throw COVID into the mix – with the genuine reluctance of many to venture into heavily populated gatherings – and the trend towards declaration voting will be supercharged.

This year, Sherry revealed yesterday, there are already around “18,000 South Australians who have currently applied for a postal vote – that compares to 4000 at the same time in 2018”.

And he doesn’t expect the demand to ease any time soon.

“We are planning for and anticipating a significant increase in the number of early votes and postal votes for this election,” Sherry said.

However, under those electoral laws our state parliamentarians forgot to change, declaration votes cannot be counted until the Monday after polling day.

Thus, Sherry notes, “there is a likelihood that we may not know the result of some electoral districts until several days – maybe up to a week – after polling day”.

So that’s another democratic tradition gone begging: casting your vote before plonking yourself down in front of your media service of choice to watch the results declared and the victory/concession speeches.

According to the Electoral Commissioner, this poll is likely to end not with a bang, but a whimper.

Still, that’s all a matter of logistics – and the logistics of the poll are the Commissioner’s bag.

A question he won’t have to ponder is what the preponderance of early voters means for the election result itself.

A high number of requests for early voting forms means not merely that many people want to get their democratic obligation out the way quickly – but also that they already know which way they intend to vote.

That’s before hearing the bulk of the promises, the weeks of persuasive rhetoric, the campaign trail gaffes. It’s before, indeed, many of the candidates have been selected in various seats.

Speaking to party insiders campaigning on the ground, there is a clear sense from the Labor side that the debacle of last year’s border re-opening – and failure to heed health advice to close it again despite the emergence of Omicron – had created palpable ill-will in the electorate.

What no-one is game to predict is how long that will last.

With the daily COVID numbers starting to settle, Steven Marshall’s coronavirus briefings taking a backseat to the daily ‘sod-turning’ and schools and offices slowly returning to a semblance of routine, there is every chance that palpable anxiety and frustration from late-December and early-January will have dissipated well before March 19.

So while Labor types can’t quite go out and urge people to cast their votes early – I doubt they’ll be doing much to actively discourage it either.

Because, regardless of the election day logistics, the task for the Opposition is an ominous one.

To snare government, Labor will have to do something it hasn’t managed since 2006 – actually win some seats off the Liberals.

To be fair, it hasn’t tried particularly hard to do it in the years since, with its strategy of sand-bagging vulnerable electorates serving it well in 2010 and 2014, and almost doing the trick again in 2018.

For the Libs, the path to retaining power is simple: win back Waite from Sam Duluk, see off independent Geoff Brock’s challenge in Stuart (which a recent UComms poll for the forestry industry suggested was on the cards) and don’t lose any of their existing seats, and they’re already back on the Treasury benches for another four years – with at least one or two ideologically-sympathetic crossbenchers to fall back on.

For Labor, the challenge is more complex.

With ex-ALP crossbencher Frances Bedford throwing her hat into the increasingly convoluted contest for Newland, Labor begins the campaign on effectively 20 seats, with the expected gain of her former Florey stronghold.

Thus, it needs to win another four, with the most marginal contenders being Newland, Adelaide, King and Elder.

After that, the next most marginal Liberal seat is Colton – on a reasonably secure 6.2 per cent.

Sure, there are some outliers: Labor hardheads believe the Liberal support in safer seats such as Davenport (8.4 per cent) and Gibson (9.9) is brittle, others are unconvinced about the polling foreshadowing Brock’s political demise, while the contest in Waite is so multi-cornered you don’t need a pendulum to guess the outcome but a dice.

But in essence, the equation appears to be – win all four of the Liberal-held marginals… or settle in for another term of Opposition.

Those are the seats the Libs are already trying to ‘sandbag’ – to emulate Labor’s election-securing feats of 2010 and ’14, albeit using more high-tech tactics: with bespoke campaigns pledging uber-local spending commitments tailored to individual voters via social media algorithms.

And they’ll be using every minute of the forthcoming campaign, expected to kick off in earnest from this weekend, to buttress those four seats against Labor incursions.

But there are plenty of voters who don’t plan to wait that long to cast their votes.