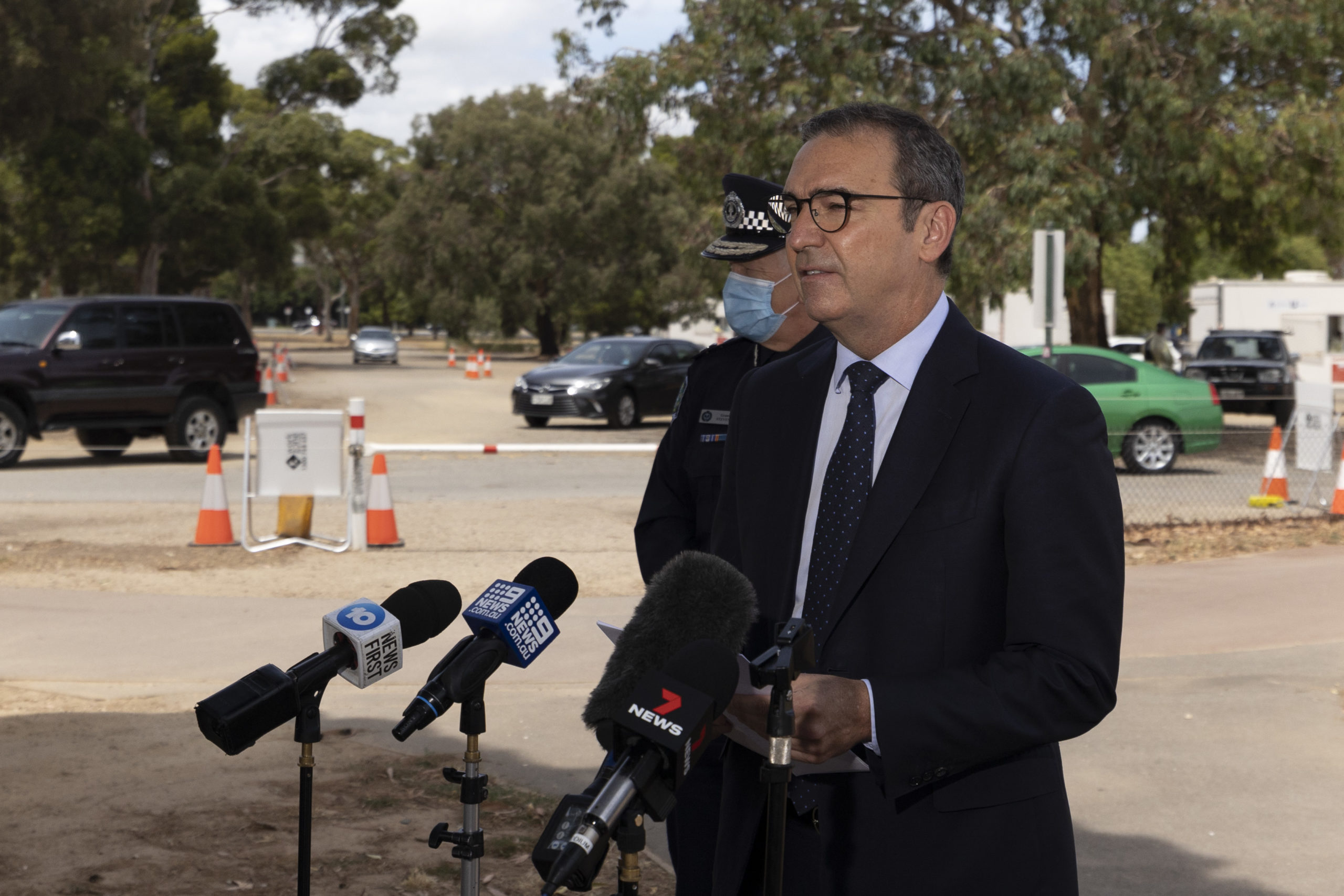 Back when that milestone was a mere two months, prominent business leader Bruce Carter called for the emergency provisions (which have been extended every four weeks) to end, telling InDaily: “There’s a time that the running of the state should revert to those who were elected to do the same.”

That’s despite the Premier, Steven Marshall, noting around this time last year that the state’s emergency management legislation – designed with short-term events such as floods and fire in mind – “doesn’t lend itself particularly well to a pandemic”.

He suggested the efficacy of the Act would be reviewed once the state had clear air – both figuratively and literally – but that the emergency declaration wouldn’t be rescinded without an alternative framework in place “to manage this emergency”.

Interestingly though, at the time, Marshall explicitly linked the emergency declaration to the management of border controls.

“We don’t want to keep SA in a state of emergency for an extended period of time… but whilst we’ve got border restrictions in place, if they’re not done under the Emergency Management Act they need to be done under another Act, and we’re looking at the best way to do that,” he said.

But the emergency provisions have remained, despite the public servant empowered to run the state’s response – police commissioner-turned-emergency coordinator Grant Stevens – taking a bit of a back seat lately.

So too has chief public health officer Nicola Spurrier.

Once the double act responsible for not merely mapping SA’s COVID response but, largely, for selling it too, Stevens and Spurrier are of late averaging about one media appearance a week each, at best.

Marshall, for so long filling the role of the state’s ‘MC-in-chief’ – whose primary function appeared to be literally introducing Spurrier to read out the daily caseloads – has of late stepped up as the sole figure at the proverbial podium.

He’s also ‘pivoted’, ‘upticked’ or ‘flexed up’ – depending on the favoured phrase du jour – his status in the planning stakes, with the dormant Transition Committee (for so long touted as the epicentre of COVID command) usurped by the somewhat-ironically titled COVID-Ready Committee, which the Premier chairs.

Mind you, the role of the COVID-Ready Committee is somewhat ambiguous: as Treasury boss David Reynolds told a parliamentary committee this week, there are never any agenda items listed, nor minutes taken.

“It’s not at a decision-making body where you would record any decisions of it,” he said.

“The decisions are made separately by the police commissioner as controller as normally, or other agencies, ministers or cabinet as appropriate.”

And it’s those latter options that have become interesting: recent decisions, such as the controversial ‘hybrid’ schooling model, have been clearly sold as Marshall Government decisions, predicated on advice from health and education.

One would presume health officials’ advice would be limited to detailing the likelihood of COVID spread in the event of face-to-face learning, but Marshall intimated this week that Spurrier also had specific input into the nuances of how, and which, students returned to class.

Why? Because she’s a paediatrician, the Premier enthused.

I’ve been highly critical of the Government’s perpetual mixed messaging since the borders opened – the most egregious example of which was when one media outlet was briefed that the borders were set to close just days after they reopened because of Spurrier’s fears of the then-emerging Omicron variant.

I lambasted the Government at the time over the communications breakdown – after authorities ultimately determined to keep borders open.

But in hindsight, it was quite a handy episode, given it put on the public record the fact that, as Stevens put it at the time, “Professor Spurrier came to the directions meeting with a recommendation to close borders, as the most risk-averse position we could take”.

“Professor Spurrier’s position was that the best and most effective way to eliminate the threat of Omicron was to close borders,” he continued.

Spurrier may not be a big fan of touching footballs, but she was happy to handball this one back (albeit metaphorically), telling a parliamentary committee hearing last week: “I provide advice, so I provided advice about what we knew about Omicron, and the advice is that the only way to keep it out is to have borders closed, which is obviously correct and accurate.”

“But then there is a different team that looks at and takes that advice, and it’s the State Coordinator who makes the decision at the end of the day,” she said.

The episode, though, is crucial to our understanding of the decision-making process – and the need to ensure accountability within it.

Marshall may dismiss partisan queries with his refrain that “my focus at the moment is 100 per cent on this Omicron wave”.

“My focus every day between now and the election – and hopefully every day after the election – is going to be on keeping SA safe and recovering our economy as quickly as possible,” he said.

But, as InDaily revealed this week, his party’s focus is well and truly on March 19 – and the Government’s pandemic response is central to its spin.

A script delivered to the offices of MPs and candidates this week contains bon mots such as: “With new modelling for Omicron the Marshall Liberal Government is working hard to reduce the spread so that we can remove some of the restrictions to businesses and further return to normality.”

Not “our emergency coordinator Grant Stevens, appointed under the Emergency Management Act”.

Marshall’s newly-reconfigured role on centre stage at least ensures he has brand recognition – even if the brand has turned toxic for some.

By contrast, pandemics tend to be unhappy hunting grounds for state Oppositions – as most of them have already discovered at the ballot box.

In SA, Labor’s Peter Malinauskas has (quite deliberately) avoided the more overt ‘shitcanning from the sidelines’ tack that has played out so poorly for Opposition parties in other states, most notably WA.

But that’s left him with another problem: not many people know who he is.

And even fewer, presumably, much care.

Still, swings and roundabouts. If no-one’s paying attention, it at least meant fewer people noticed his disastrous performance last week when he released a glossy brochure with a list of suggestions that he insisted the Government should enact right now – but refused to commit to enacting them himself in eight weeks should he win the election, even if they’re still necessary at that point.

Yet the border decision, and the revelation about Spurrier’s advice, has given the Opposition – for the first time – licence to criticise the Government’s COVID handling.

All of which means, not unexpectedly, that the pandemic will be the central issue of the forthcoming campaign – and may well relegate the campaign itself to a second-or-third order issue.

I’ve always had sympathy with the arguments of Bruce Carter and his ilk that leaving the oversight of the state to unelected bureaucrats was an unsustainable long-term solution.

However, counter-intuitive as it may be, it’s arguable that now, of all times, is not the moment for the Premier to be stepping into the COVID management breach.

For starters – why now?

Is it because of the debacle that has been the Omicron outbreak?

Or because there is an election in eight weeks’ time?

But more importantly, this is precisely the time that clear-eyed decisions based on public health advice or economic impetus should not be intermingled with political imperatives.

And the Premier inserting himself into the frame at such a moment does just that – whether deliberately or subconsciously.

Let’s take a hypothetical: let’s say daily case numbers are still in three or four figures when students are due to go back to school en masse from mid-February.

Or that the resumption of face-to-face learning for receptions and years one, seven, eight and 12 a week-and-a-half earlier prompts an escalation in case numbers.

A plausible public health response might be to advise remote learning to continue for a few more weeks.

But with writs for the March 19 election set to be issued around the middle of February, such a decision would be – to put it mildly – politically unpalatable.

Another example: the much-touted Adelaide University modelling that suggests we’re amid the peak of the Omicron outbreak is predicated on the current level of restrictions remaining in place.

But the Government has already flagged that it will be looking to relax its advice on working from home – likely as early as this afternoon.

There is also strong pressure to ease caps on gatherings, both at homes and in pubs, restaurants and gyms.

It will be hard to know whether any decisions taken in the next two months are infected by the politics of an impending election.

Of all the times in the two years since the emergency declaration, it now makes the most sense to separate the COVID planning from the Government of the day.

Late last year, Malinauskas tried to dip his toe into the waters of pandemic politicking by declaring that, if elected, he would sit on – and chair – the state’s Transition Committee.

Marshall’s response was to mockingly point out that the Transition Committee would be disbanded by then, replaced by the COVID-Ready Committee, which he already chairs.

Today – and for the next eight weeks – I’d suggest an alternative tack.

Instead of chairing it – he should recuse himself from it.

And forthcoming decisions about SA’s pandemic response should be seen to be free from electoral imperatives.