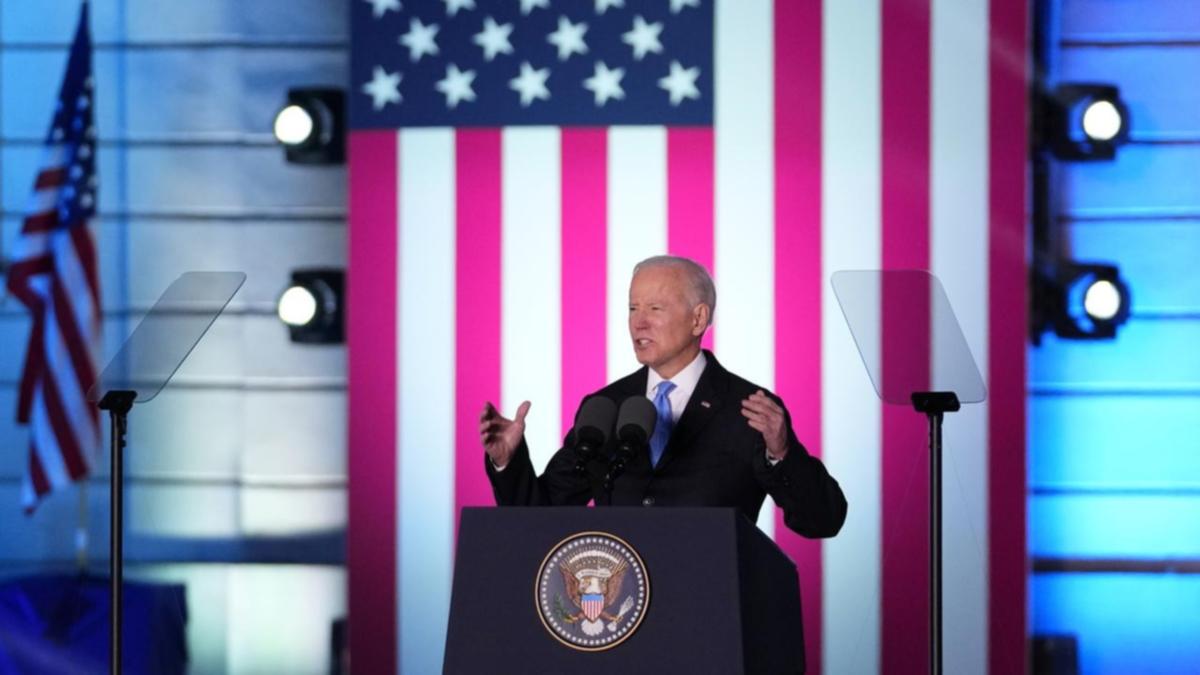 Joe Biden directly appealed to the Russian people with comparisons between the invasion of Ukraine and the horrors of the Second World War as he called for Vladimir Putin to go.

“For God’s sake this man cannot remain in power,” the US president said, during a speech from Poland on Saturday.

He said “if you’re able to listen: you, the Russian people, are not our enemy” as he evoked the atrocities of the siege of Leningrad by the Nazis.

“These are not the actions of a great nation,” Biden said, in front of the Royal Castle, a landmark in Warsaw that was badly damaged during Adolf Hitler’s war.

“Of all people, you the Russian people, as well as all people across Europe still have the memory of being in a similar situation in the 30s and 40s, the situation of World War Two, still fresh in the mind of many grandparents in the region.”

“Whatever your generation experienced, whether it experienced the siege of Leningrad, or heard about it from your parents and grandparents, train stations overflowing with terrified families fleeing their homes, nights sheltering in basements and cellars, mornings sifting through the rubble in your home – these are not memories of the past – not any more, it’s exactly what the Russian army is doing in Ukraine right now.”

Shortly after his speech, a White House official attempted to clarify that Biden was not going so far as to call for a regime change in Russia.

“The President’s point was that Putin cannot be allowed to exercise power over his neighbours or the region. He was not discussing Putin’s power in Russia, or regime change,” the official said.

Multiple rockets struck the western Ukrainian city of Lviv near the Polish border during Biden’s visit, which came as Russia faced the prospect of further setbacks in the war.

The US president said Moscow’s troops have “met their match with brave and stiff Ukrainian resistance” and have strengthened the resolve and unity of both the defending forces and the West.

“Russia wanted less of a NATO presence on his border but now he has a stronger presence, a larger presence,” he said.

Biden said 200,000 Russians had left their country in a single month in a “remarkable brain drain” as Putin “strangled democracy”.

Addressing the thousand-strong audience that included refugees who have fled the war, he told Ukrainians “we stand with you – period” as he defended the nation’s president, Volodymyr Zelensky.

“Putin has the gall to say he’s denazifying Ukraine. It’s a lie, it’s just cynical – he knows that,” Biden said.

“And it’s also obscene. President Zelensky was democratically elected, he’s Jewish, his father’s family was wiped out in the Nazi holocaust and Putin has the audacity – like all autocrats before him – to believe that might will make right.”

But as he made an impassioned defence of democracy, he reminded European nations they must “end its dependence on Russian fossil fuels”.

Sanctions, he said, have been sapping Russia’s strength and have reduced the rouble “to rubble”.

But he warned: “This battle will not be won in days, or months either. We need to steel ourselves for the long fight ahead.”