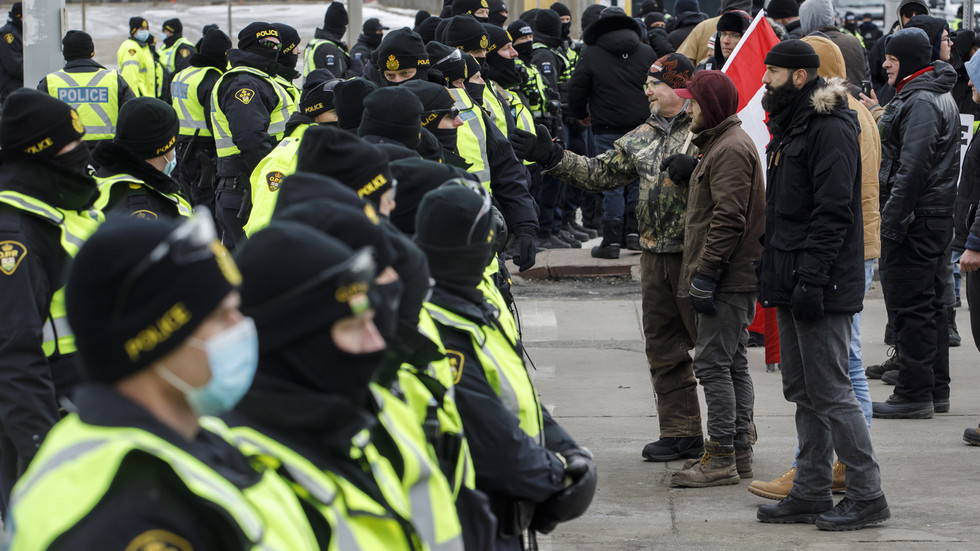 Canadian authorities made a push on Sunday to remove the last of the protesters from Ambassador Bridge and surrounding areas after having to close the border crossing in Windsor, Ontario with barricades last week.

Police began arresting non-compliant demonstrators and towing vehicles supporting the anti-Covid mandate trucker protest in Canada on Saturday. Police pushed protesters on Sunday away from the bridge before making arrests, of which there were a dozen, according to authorities.

Windsor police spokesperson Sgt. Steve Betteridge told reporters approximately 12 people were arrested from the protests and claimed there were no violent incidents between demonstrators and police.

“I am very pleased to say of those 12 arrested there was no violence at all. No violence from the protester and the officers did not have to use, use of force,” he said.

Approximately 10 vehicles in the area were also towed after refusing to move. The bridge is expected to reopen sometime Sunday afternoon.

On Friday, the chief justice of the Ontario Superior Court granted an injunction ordering the protesters to leave the area that night after a blockade that had lasted for days.

Footage from the protests shows police forming lines and pushing back demonstrators, some of whom are chanting, “shame on you.” According to local media, crowds began thinning on Sunday after arrests were made, with police far outnumbering remaining protesters. Some footage shows a handful of police for each protester taken into custody.