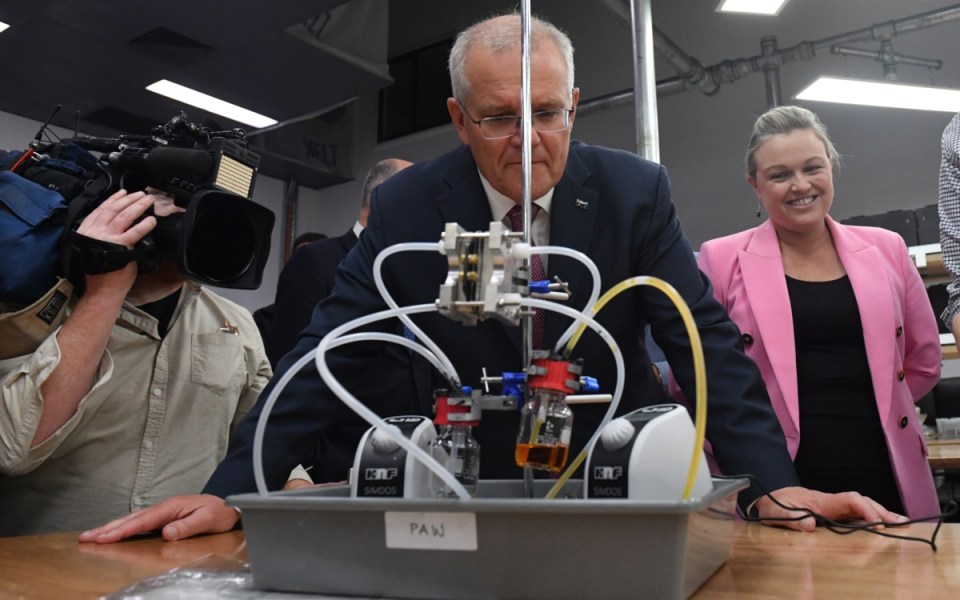 Mr Albanese fired back soon after, accusing Mr Morrison of being the “most divisive Prime Minister in modern history”.

Mr Morrison fired the first salvo in the heated tit-for-tat, campaigning on Wednesday  in the NSW Hunter region. He described a wage increase tied to the 5.1 per cent inflation figure as an ill-thought-out policy and attacked Mr Albanese for being a “loose unit” on the economy.

“It’s like throwing fuel on the fire of rising interest rates and rising cost of living,” Mr Morrison said.

“If you want your interest rates to be skyrocketing, as a result of what Anthony Albanese is suggesting, well, he’s your guy.

“He thinks he can run around at this election saying he can increase people’s wages and at the same time, see cost of living pressures fall. It just doesn’t work like that.”

But Mr Morrison repeatedly refused to say how much he thought wages should rise as cost of living remains a central election issue, with inflation at a two-decade high.

“The figure I have always been comfortable with, and that is what is calmly determined, sensibly, by the independent process that looks at all of these factors. That’s what financial discipline is,” he said.

“I’m not speculating about what [the Fair Work Commission] is going to say.”

The FWC is in the process of deciding on the annual increase in the minimum wage – a decision that affects millions of Australian workers.

Mr Morrison accused Mr Albanese of trying to take Australians for a ride with baseless claims about wage rises.

“Businesses around the country … don’t want these things set by some erratic statement of a politician. They want this stuff to be carefully considered,” he said.

“Careless speculation can lead to real-world impacts in the economy.”

Campaigning in the Liberal-held seat of North Sydney on Wednesday, Mr Albanese didn’t take long to hit back, accusing Mr Morrison of “once again being loose with the truth”.

“I’m amazed that this is not a bipartisan issue – because this is a government that … did a budget just a short while ago, whereby they made changes to petrol, they gave $250 handouts, they did all of this cost of living relief, saying there was a cost of living crisis,” he said.

“Well, there is a cost of living crisis, people are doing it tough and that is why there needs to be action.”

Labor has consistently attacked the government for stagnant wages and inflation outstripping pay rises. Wages growth has averaged just 2.1 per cent a year since the Coalition came into government in 2013, and worker remuneration often failed to keep up with inflation during this period.

The opposition had stopped short of putting a number on wages growth until Tuesday, when Mr Albanese said he supported a minimum wage increase of 5.1 per cent, in line with the spiking inflation.

“What we are talking about here is the lowest paid workers in Australia. Those people who are really struggling with cost of living increases,” he said on Wednesday.

“What Scott Morrison says is that it is OK to find $30 million for a block of land that is worth $3 million. It is OK his government can always find money for sports rorts, for commuter car park rorts, for all of this activity, that he is OK to waste those billions of dollars.

Anything below inflation would be a pay cut, Mr Burke told the ABC.

“You’ve heard all of us on many occasions for a long time now say people can’t keep going backwards,” he said on Wednesday.

Australian Industry Group chief executive Innes Willox said wage growth of more than 5 per cent – or an increase to the minimum wage of $42 a week – was unsustainable.

“There are hundreds of thousands of small businesses and for many of them this would be a backbreaker, it’s not sustainable for them to be asked to pay this,” he told Sydney radio 2GB.

Labor frontbencher Amanda Rishworth refused to say whether the party would put a specific figure in a submission to the FWC.

“Our principle is that pay should keep up with the cost of living and I don’t understand how that is controversial,” she told Sky News.

“We will work with unions and businesses to put a submission in.”

Elsewhere, Mr Albanese and Mr Morrison will go head to head in the third and final leaders’ debate of the election campaign on the Seven Network on Wednesday night.

It will be moderated by Seven’s political editor, Mark Riley, and feature a panel of about 150 undecided voters from marginal seats across Australia. The broadcast begins at 9.10pm (AEST) – after the debut episode in the latest series of Big Brother.