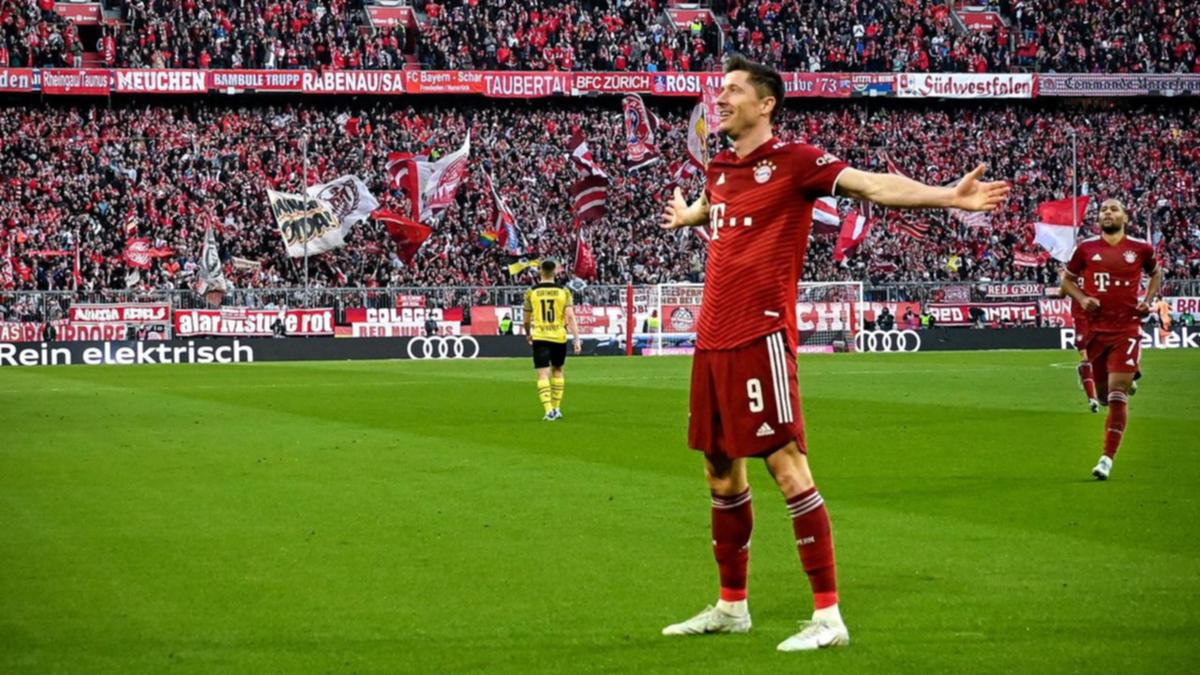 Bayern Munich have won a record-extending 10th consecutive Bundesliga title, becoming the first side in a major European league to do so, thanks to a 3-1 home victory over second-placed Borussia Dortmund.

Juventus had previously managed nine Serie A championships in succession in Italy but Bayern are the first to have a decade of undisputed dominance in a leading division.

A brilliant Serge Gnabry goal opened the scoring in 15 minutes on Saturday, with their master marksman Robert Lewandowski doubling the lead before the break.

In the second half, Dortmund cut the deficit through Emre Can’s penalty but despite creating chances could not find the equaliser they needed to extend the title race and Jamal Musiala sealed Bayern’s triumph with a goal six minutes from time.

Bayern cannot now be caught, leading the table by 12 points with just three games remaining as coach Julian Nagelsmann celebrated his first major honour in his debut season in Munich.

But while the personnel has changed in Munich over the last decade, the outcome of Bayern winning the Bundesliga – often with room to spare – has remained a constant.

Bayern have not been at their best this season, as witnessed by their early exit from the German Cup and disappointing quarter-final loss in the Champions League, but over 31 games of the 34-match Bundesliga season they’ve remained untouchable.

Dortmund fought bravely, with Can’s 52nd minute penalty, after Joshua Kimmich had fouled Marco Reus, making the game tense and only a save from Manuel Neuer and block from Lucas Hernandez prevented Marco Reus levelling.

But that was in stark contrast to the first half Bayern dominated and was too little too late.

A corner broke the deadlock when Leon Goretzka headed to Gnabry, who controlled with his thigh and volley into the top corner from the edge of the box.

Gnabry had another disallowed for offside before Lewandowski notched his 33rd of season from Thomas Muller’s pass after a careless Dortmund giveaway.

And when Musiala forced home after keeper Marwin Hitz saved his initial shot, Bayern could start their celebrations early.

It summed up Dortmund’s title challenge this year of being good in places but not consistent enough the whole contest to cause damage.

Results elsewhere, however, did confirm Dortmund’s qualification for next season’s Champions League.

Bayer Leverkusen boosted their own hopes of reaching the elite continental competition by going third with a 4-1 win at Greuther Furth, which relegated the bottom-placed hosts.

Leipzig failed to repeat their midweek German Cup semi-final success over Union Berlin as late goals condemned them to a shock 2-1 defeat in falling to fourth.

Freiburg, who meet Leipzig in the German Cup final next month, fought back from two goals down but were held 3-3 by Borussia Monchengladbach’s injury-time equaliser.

They stay fifth, two points behind Leipzig in the final qualifying berth to the Champions League.

Cologne beat Arminia Bielefeld 3-1 to stay on the heels of Union Berlin above them in sixth while Eintracht Frankfurt and Hoffenheim drew 2-2.