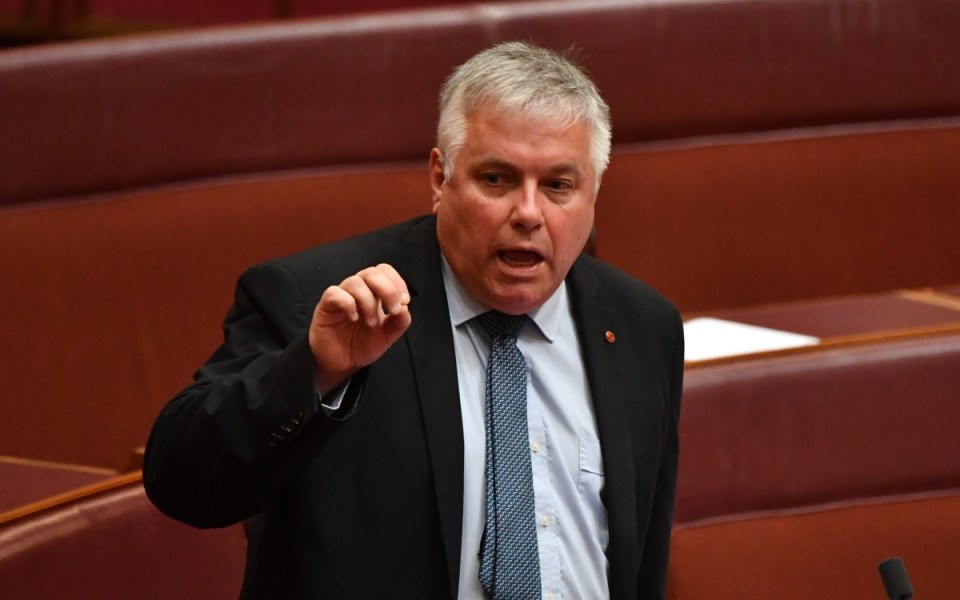 The South Australian senator who replaced Nick Xenophon – and is now running against him to retain his seat – has launched an extraordinary attack on his former boss, using parliamentary privilege to slam the lawyer for representing Chinese tech giant Huawei and likening it to doing PR for German arms manufacturers under the Nazi regime.

Mr Xenophon’s law firm – to which he returned after his political career crashed in 2018 – was controversially retained as “strategic counsel” to Huawei in 2019, after the federal government banned the Chinese titan from its 5G rollout, citing security concerns over its ties to Beijing.

At the time, Mr Xenophon argued the company had been “treated incredibly unfairly”, with Huawei describing his role as “helping to defend our company locally against malicious and false attacks designed to cause us reputational damage”.

With Mr Xenophon launching a fresh senate tilt for the seat now occupied by Senator Patrick, his one-time staffer has seized on the relationship to launch a scathing criticism of his former boss.

“We have to be very clear about the nature of the company that he has been engaged with,” Senator Patrick told the senate on Tuesday night under parliamentary privilege.

“It’s a huge Chinese corporation, intimately connected with the CCP, which supports Chinese state espionage and which, according to documents published in the Washington Post in December last year, has helped Chinese authorities create the surveillance network that targets that country’s Uighur minority.

“There can’t be any compromise when it comes to Australian national security, nor can there be compromises on human rights.

“Mr Xenophon has declared his political candidacy – in the interests of accountability and transparency, he should make an immediate disclosure of all the details of his work for Huawei.

“I urge him to do so – voters can then make their own judgment.”

Senator Patrick said “national security and campaigning for better transparency and accountability in government and the parliament” had been key themes of his tenure, arguing that “in the years ahead, Australia will face new strategic challenges of a scale we have not experienced for decades” – highlighted this week by China’s diplomatic manoeuvres “to gain a military foothold in the Solomon Islands”.

“Our vital defence industries, including naval construction, aerospace surveillance and electronic warfare capabilities in South Australia, must be fully safeguarded from espionage,” he said.

“Anyone who seeks to represent our state in this parliament must be fully cognisant of these threats from the Chinese state and free from entanglement that might compromise their preparedness to act without reservation in Australia’s national interest.

“While I acknowledge former senator Nick Xenophon’s political skills and past record as a representative of South Australia, I am strongly of the view, now that he has put his hand up to return to this place, that he must be completely transparent about his dealings with the Chinese telecommunications giant, Huawei.”

“Huawei has also aided the internal surveillance activities of Chinese state security, especially the oppression of the Uighur people in Xinjiang,” he said.

“After his resignation from the Senate and failed 2018 political campaign to re-enter the South Australian parliament, Mr Xenophon undertook, through a new partnership with former journalist Mark Davis, to represent Huawei as its so-called ‘strategic counsel’.”

He noted that “at that time, in December 2019, Huawei had already been banned by the federal government”.

“Since then, security concerns about Huawei have only grown,” he said, citing US government claims that Huawei “covertly exploited backdoors in carrier equipment supplied to law enforcement agencies” and recent revelations “that as early as 2012 Australian intelligence detected a sophisticated penetration into our telecommunications system, an intrusion that began with a software update from Huawei that delivered malicious code”.

“While working for Huawei, Mr Xenophon did not register it with the Australian Foreign Influence Transparency Scheme,” Senator Patrick said.

“In this, he appears to have relied on the exemption for persons providing legal advice to foreign organisations and a claim that he was not directly lobbying government ministers.

“However, the work that Xenophon Davis did for Huawei appears to have been largely in the public relations field and directed towards influencing the federal government to reopen the door for Huawei to infiltrate Australia’s 5G telecommunications network.

“That is, of course, one of 14 demands the Chinese government has made before they will reconsider their current hostile stance towards Australia.”

He noted Mr Xenophon had “declared that Huawei was an ‘underdog’”, adding: “I’m not sure how a vast Chinese conglomerate with global networks backed by the Chinese state could ever be described as an underdog, but that was his description.”

“This was all a misjudgement on Mr Xenophon’s part,” Senator Patrick said.

“He was entitled, as a private individual, to work for whoever he wished – but the choice he made was akin to someone choosing to do PR work for the German companies Krupp or Messerschmitt in 1938.”

Senator Patrick noted Mr Xenophon’s recent admission that he has not worked for Huawei for some time – “though we don’t know when he ceased” – and the former senator’s claim to now “support the Australian government’s 5G ban on Huawei”.

“As a declared Senate candidate, he should now, in the interests of transparency and accountability, disclose the full details of his contractual relationship with Huawei,” Senator Patrick said.

“He should disclose the terms, conditions and duration of his contract; what instructions he accepted from Huawei; and precisely what services he and Mr Davis were paid for.”

Senator Patrick noted Xenophon’s 2016 comments about former Labor senator Stephen Conroy’s role as a gambling industry lobbyist, when the former No Pokies crusader said: “I think it’s not unreasonable to disclose how much you’re getting paid and how much lobbyists are getting paid for particular jobs.”

“Mr Xenophon chose not to make such a disclosure when he began working for Huawei [and] he hasn’t done so since,” he told parliament.

“It has always been my view that if Mr Xenophon were to again be a candidate for public office he would need to be fully transparent about his work for Huawei.”

He last week confirmed a fresh senate run, pitching him against his former staffer Senator Patrick, who took his seat as a casual vacancy.

But former NXT, and current Centre Alliance, MP for Mayo Rebekha Sharkie pointedly declined to endorse Mr Xenophon’s return when asked about the standoff on ABC Radio Adelaide on Wednesday.

“I’m very grateful to be in the House of Representatives,” she said of the fracas.

“I’m not backing either of them… I think Rex Patrick has done a really good job and I might just say I think we have the fuel excise cut [in last night’s budget] because of Rex Patrick, because he’s pushed really hard on that. But I am concerned that we need to make sure that it actually gets passed to the consumer and, look, there will be many people putting their hand up for the Senate.”

“I haven’t spoken to Nick in some time and look I wish them all the best, maybe they will both get in,” she said.

Asked about Senator Patrick’s Huawei speech, she said: “I think many people were surprised when Nick did work for Huawei – I think he explained it was an Australian company [but] look, voters will have their choice in really a few weeks time.”

Mr Xenophon did not respond to requests for comment.

This article is first appeared in InDaily and is republished here with permission.