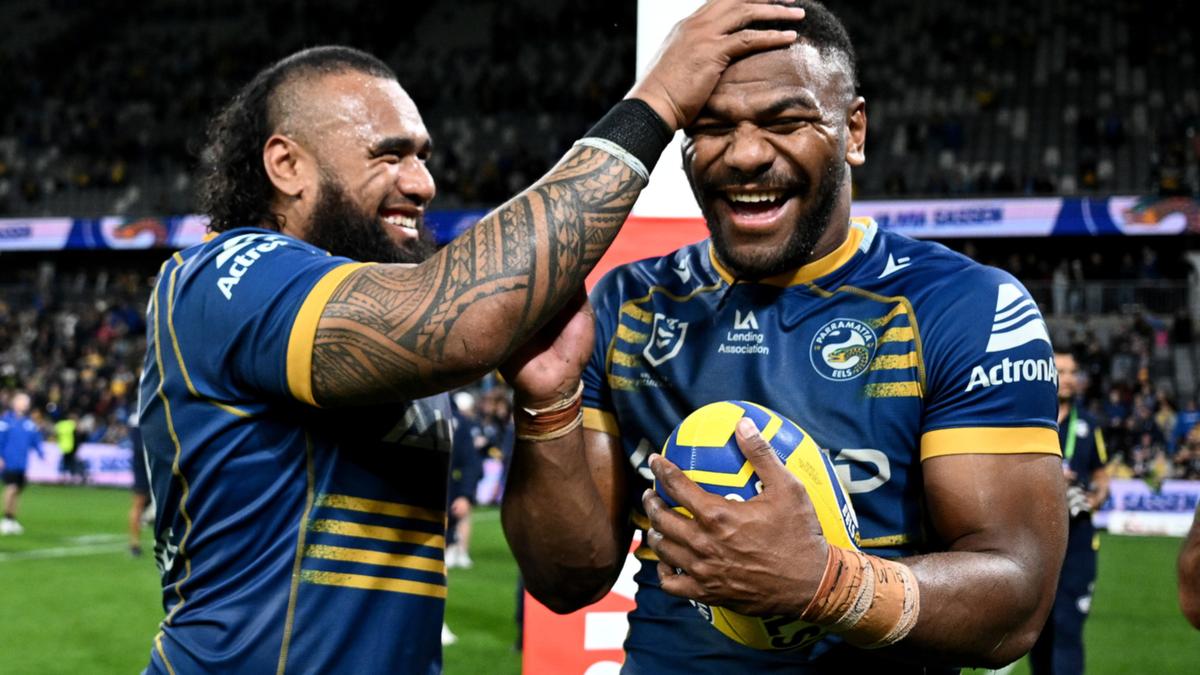 Parramatta have given themselves a big shot at ending the NRL’s longest premiership drought after beating Melbourne 22-14 to claim the last spot in the top four.

In a high-stakes, winner-takes-all battle for fourth spot, the Eels pulled out 65 minutes of finals-like defence before conceding three late tries on Thursday night.

WATCH IN THE VIDEO ABOVE: Eels run riot over Storm

It was enough to wrap up the coveted top-four finish, leapfrogging Melbourne, who finish fifth – their lowest placing since 2014.

Parramatta’s win sets up a qualifying final against minor premiers Penrith at BlueBet Stadium next weekend, with the victors to advance straight to a preliminary final.

Defending premiers Penrith, regarded as the competition’s best team, will still enter as favourites but they’ve twice fallen to the Eels already this season.

Without a premiership since 1986, Parramatta have regularly stumbled in September in recent years with a 2-6 record in the finals over the past decade.

But after the end to their 2022 regular season, the 23,578 long-suffering Eels fans at CommBank Stadium finally had reason to believe.

Brad Arthur’s men look a different team to those that have fallen in the second week of the finals in five of the past six years.

“We’re playing well at the right end of the year, we limped in last year,” said the coach.

“We have a massive opportunity come next week. It’s up to us now whether we grab the opportunity.”

They defended stoically on Thursday, three times forcing the Storm over the sideline as they peppered the tryline and only conceding points late.

Halfback Mitch Moses even pulled off one of the hits of the night on Kenny Bromwich, leaving the second-rower concussed and forcing an error as the Storm went on the attack in the second half.

The Eels pack have responded after being dominated by South Sydney last month, with Reagan Campbell-Gillard playing the first half unchanged as he and Junior Paulo topped 160 metres each.

But the try of the night was reserved for Maika Sivo, as the Fijian powerhouse ran onto a superb long ball from Clint Gutherson and ran 40 metres to score.

The Storm were uncharacteristically poor, now facing the prospect of trying to become the first team in the NRL era to win the title from outside the top four.

They made errors at all the wrong times, with the absence of halfback Jahrome Hughes felt heavily.

At one stage down 20-0, Harry Grant, Nick Meaney and David Nofoaluma each crossed in the final 15 minutes to make it three tries apiece.

Under-fire forward Asofa-Solomona also earned the ire of officials again, put on report for a late shot on Moses after previously copping five fines this year.

The result leaves Melbourne out of the top four for just the second time since 2006, with a must-win clash against Canberra or Brisbane next week.

“It’s hard to (win it from outside the four),” Bellamy said.

“To win the comp, you have to win four games in a row and then the last three that you’re travelling.

“It is difficult without a doubt, but it’s going to get done at some stage.”