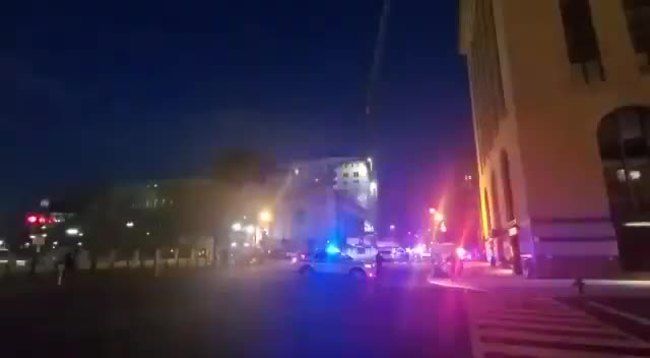 The father of a student killed in a mass shooting in Parkland, Florida, scaled a construction crane a block from the White House on February 14, calling for President Joe Biden to pass gun legislation on the fourth anniversary of his son’s death. Manuel Oliver, whose son Joaquin Oliver was one of 17 people killed in the shooting at Marjory Stoneman Douglas High School on February 14, 2018, climbed the crane and unfurled a banner calling for gun-control legislation. This video filmed by Change the Ref, a gun-violence awareness organization cofounded by Oliver, shows police presence at the scene on Monday morning. Additional photos from Change the Ref show Oliver in police custody. At 10 am, Biden tweeted, “On February 14th, 2018, a gunman stole the lives of 14 students and 3 educators at Marjory Stoneman Douglas High School. Today we mourn with the Parkland families whose lives were upended and stand with those working to end the epidemic of gun violence. Congress must act.” Credit: Change the Ref via Storyful